Wallabies knocking on the door 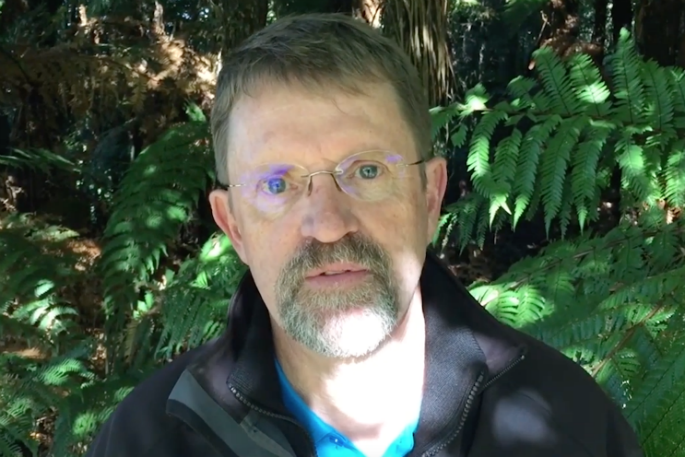 It was the unmistakable silhouette of a wallaby that excited.

A Facebook post of an about-to-be-deceased wallaby as it leapt across the railway lines in front of several hundred tonnes of logging train between Murupara and Kawerau.

It was there going into the rail yard, according to the train driver, and it was there coming out. He snapped the wallaby on his phone as evidence.

“That’s the problem – it’s not deceased,” says rueful Bay of Plenty Regional Council biosecurity officer, Dale Williams. The wallaby was too quick for the train. So Dale dispatched a contractor with ‘indicating’ dogs to flush out the Ozzie invader. But it had disappeared into a blackberry thicket.

That made Dale slightly uneasy.

“That wallaby is a long way from the main breeding population around Kaingaroa Forest. It’s also only a kilometre or so from the Rangitikei River bridge. And that’s of real concern.”

If the wallaby cross the Rangitikei, the next stop is Te Urewera – a vast, heavily forested, sparsely populated and protected area and home to Ngai Tuhoe.

“We certainly don’t want them in there. We definitely don’t want wallabies established there. It would have a major negative impact and be very difficult to manage.”

Why all the angst? The dama wallaby, macropus eugenii, looks so cute – just 530mms high, weighing up to 7kgs, sleek grey-brown coat with pale belly, the greenish-yellow eyes and the irresistible ‘take-me-home and cuddle me’ appeal.

“That’s half the problem,” admits Dame. “Look at stoats and the impact is obvious, they kill kiwis.

“People see an immediate problem. But then they go: ‘oh, I didn’t know we had wallaby’ or ‘I can’t see the problem, they just chew grasses and shrubs and things’.”

But that can have a huge impact on our birdlife for instance. They devour the seedlings of exotic trees which may also produce a lot of seed that the birds eat.

“So over time there's a slow and insidious change to the forest,” explains Dale. “The wallaby works slowly and systematically nipping off every palatable seedling. And that completely removes the regeneration of some species. The impact is quite dramatic.”

The wallaby, classified as an unwanted organism under our biosecurity legislation, inhabits 200,000 hectares east of Rotorua. The spread is not alarming – but it’s a bit of the hare and tortoise thing, slow but sure. And the Bay of Plenty is not immune – wallabies are knocking at our door, nibbling at our seedlings. They’ve reached Paengaroa.

“Go to the end of Allport Road east of Paengaroa and there’s a small DOC reserve called Roydon Downs.

“They’re established there,” says Mark. “They’ll be in the pine forest to the west, and across the state highway in Sun Valley right up to the Kaituna River.”

And there’s a natural barrier like the open pastureland in the area.

The new pest management plan is one of progressive containment, preventing the spread of wallabies.  Dale Williams has some tools in his box like pesticides – cyanide and 1080.  There’s night shooting with thermal imaging, scopes and night vision.

“They live in scrub during the day and at night if they have access to good quality pasture, they will come out and feed at night. So night shooting is good. Problem solved.”

But they need people on board, people who will advise regional council if they spot a wallaby – they’re wanted dead or alive.

When the train driver’s image of the wallaby appeared on the WBOPRC Facebook page, the anti-1080- brigade seized the moment.

“Let go of the pest mentality,” said one post. “It only promotes inhumane ecocide poisons.”

Another said: “they’ve been trying to push this wallaby story a bit lately. Might be to do with ideas of spreading poison”.

The regional council immediately tried to defuse things. It thanked the contributors and explained that usually when a report of a wallaby comes in a highly trained detector dog is dispatched.

“If it’s a small population then they can be humanely killed with a gun rather than pesticides.”

“Well, that’s unfortunate,” admits Dale. If wallaby sightings are reported smartly, it’s highly likely the problem can be solved with man and gun.

“Whereas if you don’t tell us and we end up with a quite a well-established population, we probably have to use poison. We will use cyanide to start with. But if it’s a bigger problem 1080 might have to be an option.”

So keeping quiet about wallabies may be counterproductive here.

And all this can been sheeted back to George Grey, governor of New Zealand who thought it might be cool to ‘zhuzh’ up our wildlife with a few monkeys, zebras, gnus and five species of wallabies. Nearly 200 years later we are paying for his folly.