No fair suck of the sav in Tauranga 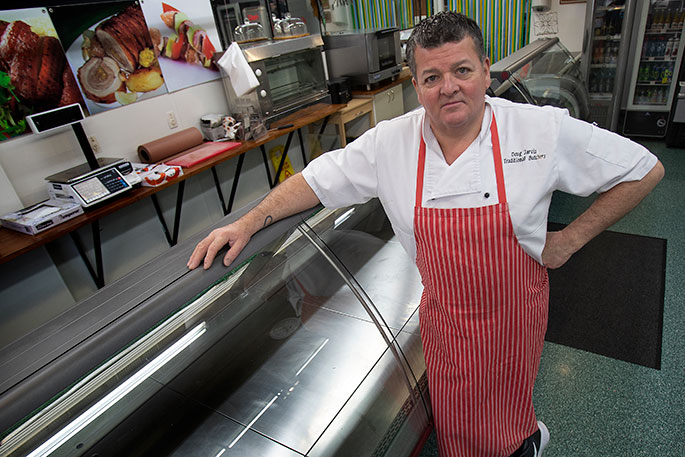 Doug Jarvis is cleaning up and clearing out from his store in the Tauranga CBD.

The traditional Cumberland sausages, Lancashire black pudding and pork pies have disappeared from Tauranga’s main street… just as quickly as they arrived.

Doug Jarvis, the traditional English butcher, a man who knows his craft, a second-generation butcher with 38 years of experience, couldn’t make his expansion into the Tauranga CBD work.

And after an 18-month dabble in the CBD, he’s gone from Devonport Road.

“When I took it over from Jason and Dee, it was going well, very well.”

But then Farmers closed and other shops followed. “Over the last four months it’s gone from iffy-ish to nothing,” says Doug. “No customers, zero, there’s nobody in that street whatsoever.”

So the signs went up in the window of Doug’s Devonport Road shop. “Dear valued customer, it is with great sadness that I have no other option but to close down our Tauranga store until further notice. It is a sad day for this iconic butchery…” Doug hung on for as long as he could without losing too much money.

“Any queries contact me personally.” Because the personal touch is the way this man operates.

“Damn!” said a passerby after reading Doug’s windown notice. “He does great snags.” She will just have to drive 8km to Owens Place or another 10km to Papamoa where Doug has other outlets.

“I was hoping to grow my business, get out there,” says Doug. “But if I got 12 customers a week, that was a lot. Even then, they were buying a pie or four sausages. None of the big customers like in my other stores.”

“Definitely a decline and it’s observable.” Of course he would love to see the heart of his city pumping. Doug Jarvis did a count the morning the “closing” signs went up. “Twenty-two empty premises. It’s a dying city. I would hate to see what that place will be like in 12 to 24 months.”

The Mayor says events have conspired against retail in Devonport Road – like the malls and the opening of the Crossing with 100 shops and eateries, and Farmers temporary departure from the city.

“It’s hard to know what would work in downtown Tauranga. Although when Farmers comes back, like may attract like. Let’s hope.”

Doug Jarvis says the one prickly issue raised by customers was parking – not enough and too expensive.

The new carpark building may help but the Mayor says only people will help. “Auckland’s Queen Street died until people started living downtown. Now 50,000 to 70,000 people live in the CBD and it’s buzzing.”

So when Farmers return and apartments start springing up, creating a downtown population, things might change. But, says the Mayor, people need to do more than talk. “They have to support the businesses – they have to go out and eat and buy there.”

But that will all come far too late for Doug Jarvis. “That’s sad.” There were a lot of sparkling stainless steel cabinets in his shop this morning and not so much as a lamb chop. It may be a wider problem. “Every retail butcher I know will say they’re doing okay but they’re not. It’s a dying industry.”

The soulless supermarkets are taking over, pre-cut and pre-wrapped meat – no chat, no smiles, no personal service.

“I am not sure there are any answers,” says the butcher, turning his back on Devonport Road.

i live at mount maunganui and havent been to the tauranga money pit for the last 10-12 years goto the warehouse - free parking !!!

There is not point in throwing more millions into the CBD. Can’t the TCC that every move they make to bring ’shoppers’ back just adds another nail in the coffin. It is too late now - R.I.P. Tauranga CBD!

events have conspired against retail in Devonport Road

are you kidding me? Did the council not know of the many building consents they had approved ALL AT THE SAME TIME? Oh no wait, its such a big surprise. Wake up Greg! YOU and your team of incompetents have killed the CBD, so thanks for that. Every single week another retailer is gone. Yes, its your fault. Now fix it. Dont wait for Farmers to provide a magic fix. Santa is also not real.

Customers vote with their feet & Money.

So as always customers are always right. they voted with their feet a long time ago on downtowns all around the world. Time for the council to move out and sell all the land they think is so valuable and put the money to better use. They have been trying to sell land for a hotel down there for at least 30 years and have never succeeded. Must tell them something. Let the current landowners look after themselves and rate them according to what they want to spend to prop up their investments down there. The world has changed but Council idea’s haven’t yet they run a good interent service. Go figure.

Its amazing that we have to lose retailer after retailer in the CBD and still the Councillors dont get that waiting for apartments to be built will NOT be the answer. You need to activate areas of the CBD and make people want to come to it. Put on events and entertainment regularly and clean the place up. Council, utilise your staff efficiently and get involved in basic stuff not wish-list items that spend millions for no outcome. Private organisations in Tauranga are here and can organise events monthly with little expense if you know where to look. Work with the retailers and residents not against them.

I love the butchers I use Papamoa all the time. In supermarkets they cater for families but you dont want large packs of meat when there are only 2 of you so Doug forever for me..... As for town i never go there for anything. Parking is the big issue and what do they do to help the problem but put the parking fees up again. Of course people will go to Tauriko, Bayfair, Papamoa and other satellite places as you get the free parking plus a huge variety of stores in one area. Much more convenient. I came not long ago to town to the bank but it was useless i drove for 50 minutes looking for a park and in the end I parked at 8th Avenue and walked back to town..... never again

Private money have developed malls, which draw people away from the CBD. Public money from the poor suffering ratepayers, will be used to lure people back. Heart of the City will be proved a folly. Only private money, such as the Farmer’s development will attract people back. Mayor Brownless opened the second stage of the Crossing, so saw first hand the draw of alternative shopping. A flash new library and palace (Admin building) will not draw me to the CBD

When I came to Tauranga many years ago downtown was a lovely place to visit. Never go there anymore. A pity for the shops that are hanging on but really not worth the effort of driving in and trying to find parking. Just increased the price when it should be free if you want people to come. And before sanctimonious person says use you should use the bus , not everyone can especially with shopping. I used to use the bus to travel but the new bus routes also don’t work for my needs with changing buses taking twice the time to get where I want to go. In winter its use the car...

So our esteemed Mayor ‘hopes’ things might come right. That’s not good enough. Ridiculous rents being charged for downtown premises and the only place in Tauranga you have to pay for parking; why wouldn’t people go the Crossing, Bayfair or Mt CBD? It’s not rocket science but this Council is squarely to blame. All must go at next elections.