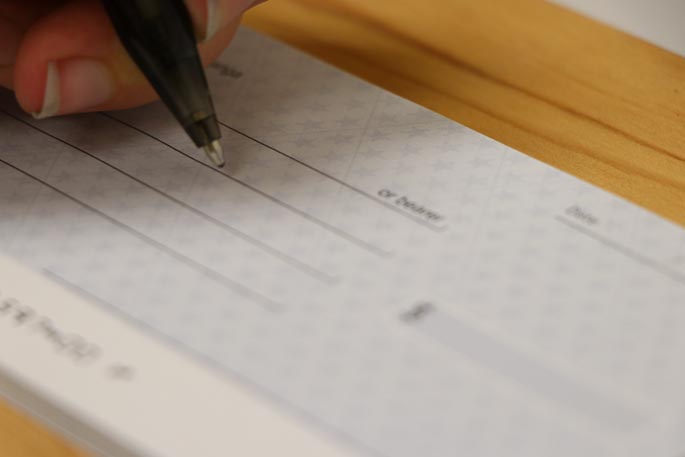 A Waikato man has been sent to jail after altering two cheques and gifting $67,000 to the Mongrel Mob.

Christopher Wilson, 42, from Te Aroha, appeared at the Morrinsville District Court on Tuesday on two charges of using two forged cheques at the local Westpac bank on December 21, 2018, and January 4, 2019.

Wilson claimed to have altered the two cheques for his son and grandson, who have affiliations with the Mongrel Mob, and they passed the money on.

He pleaded guilty but asked for his sentencing to be lessened on the grounds that the money never went into his own pocket.

"My understanding was that there was no financial gain to the event as he was asked from family to deposit the cheques into someone else's account and he in fact didn't benefit in anyway and never saw the money again," Wilson's lawyer, Jennifer Raleigh says.

Wilson has a long history of offending, including driving offences in 2014 and 2018.

Raleigh says Wilson accepts that what he did was stupid and wrong, but asked that the Judge step back from the usual forgery sentencing of imprisonment.

"Originally Mr Wilson had hoped that other family members would be charged, but he has since put his hand up and taken responsibility," says Raleigh.

"My submission is that if Mr Wilson is able to remain in the community then he has offered to pay a reparation at the rate of $250 a week."

However, Judge Merelina Burnett says Wilson was playing the victim in an offence he committed.

"You used these two cheques on two separate occasions, given to your son who is an associate of the Mongrel Mob," she says.

"You deliberately altered those cheques and banked and obtained the proceeds. And by doing so you were laundering money for the Mongrel Mob or simply gaining a large amount for your family.

"A fraud like that is blatant and deliberate. And my goodness you are responsible because you were asked to do it and you did it.

"I've got a sentencing report that records that you minimise your culpability by presenting yourself as a victim and indeed you're doing it again in court right now. You say that you are remorseful for your offending and are willing to pay reparations but you don't accept full responsibility."

Judge Burnett also says that Wilson would be unlikely to continue to pay the large reparation of $250 a week that was suggested.

"You have a significant history of dishonesty and I can't see that your undertaking to the court to pay week in and week out for five years plus will be obtained."

Wilson was sentenced to one year and eight months imprisonment. He was also ordered to pay $20,000 in reparation to Westpac NZ Ltd at $30 per week to commence post imprisonment.

I didn’t know that membership could be bought. Thanks for that.

I think you MISSED the point, he is 42 years old! Unless he is of "simple mind" then he KNEW what he was doing - TRYING TO BUY family members access to membership of the Mongrel Mob !! sorry, but he got off light !! The same offence in many countries would get him anything up to 20 years inside !! Oh and Westpac will never see the so called reparation !!

… we end up with someone who is embittered against the system and even more likely to offend in future. In fact, he has been treated fairly, but he won’t see that. I wonder why the Mongrel Mob, (who actually benefitted) were not required to make (at least some of...) the reparation?