Speed camera petition being looked into by council 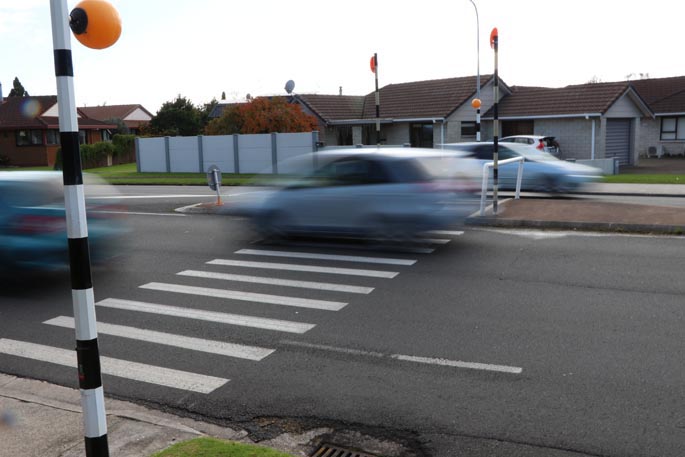 The pedestrian crossing where Jeff is hoping a speed camera will be put. Image: Daniel Hines.

A petition put together by a Tauranga resident for a speed camera to be installed along Chapel Street is being looked into by council.

Back in May of this year, a resident who only wants to be known as Jeff, gathered more than 60 signatures in support of a speed camera being installed along Chapel Street.

He put the petition to the Tauranga City Council, with the petition making the agenda of the council’s projects, services and operations committee meeting.

“None of the crashes involved pedestrians or cyclists. Two crashes were related to the pedestrian crossing and were both ‘nose-to-tail’ vehicle crashes involving a vehicle that had slowed for a crossing user.”

“We can confirm it’s a NZ Police matter, as speeding is a moving traffic violation, this is ticketed by the police.

“We understand they already have a site on Chapel Street, but it is closer to Vale Street.”

He says they will discuss with NZ police to increase the deployment in this area.

“We will also raise the option of including another site closer to the Maxwells Road pedestrian crossing.

“Ultimately, however, the location and operation of speed cameras are at the discretion of the NZ police.”

need to start talking to each other and stop passing the buck. SOMEONE needs to take responsibility for the traffic monitoring/enforcement. Put up the cameras at traffic lights! Put up the speed cameras! Just do it already. Too many people are dying and being injured by speeding cars in Tauranga. Its not a village any more Dorothy.

What a total waste of money and resources. If those crash statistics warrent a speed camera then it might pay to look into a satellite to monitor the whole of Tauranga. Don’t get me wrong, I’m not against speed cameras (I am against signs warning people that they are there though). I agree with Murray.Guy that relocatable is a great idea. Then relocate them to areas of roadworks. The recent roadworks at Pyes Pa/Joyce Roads intersection have had absolute thoughtless idiots screaming through the 30kmh area putting roadworkers at great risk and other road users at risk as well and wouldn’t you know it, not a cop in sight. So many drivers manoeuvring those roadworks while talking on their mobile phones too. Come on Tauranga Police it’s time to step your game up and start enforcing our road laws. All major roadwork sites should have relocatable speed cameras. Good call Murray.Guy

TCC says, “Ultimately, however, the location and operation of speed cameras are at the discretion of the NZ police.” ... That may be BUT I have no doubt the Police would support any tool that hit the speedster in the pocket and increased safety at NO cost or inconvenience to the Police. TCC should have NZTA/POLICE certified and approved relocatable speed cameras. Far more effective than the speed hump and only disadvantages the law breaker!

So considering the number of accidents over the 5 year period and the severity of them, there isn’t really a need to have a speed camera here other than to raise revenue, which is the reason for most cameras. If Council decide to put up a ’safety camera’ then there should be signs warning drivers that a speed camera is ahead. This will then have the desired effect that these residents are after - to slow vehicles down.

Is there any in Tauranga? With the lack of policing and or decision and or ability to do the job, the council should take on some of the responsibilities in order to make our roads safer. Forget about waiting for the Police. Get some speed cameras and red light cameras installed around Tauranga. Ideally also camera technology that picks up all those mobile phone users we all see driving every day when on the roads.

Shift the crossing toward Vale Street. Where it is now is "visually busy". Furthermore, statistics show only 1 minor accident every six months. Hardly noticeable on the big scheme. We don’t need another revenue gatherer.

Is "Jeff" a traffic engineer? Did he submit a comprehensive traffic engineering study with the petition? Rather than assuming or pretending to know how to make your street safer, why not advocate for a professional study to analyze crash history, crash causation, a speed study and speed limit evaluation, and even a road design analysis. Why does Jeff want to bypass the use of traffic engineering science?