Tight finish on the cards at Laser world champs 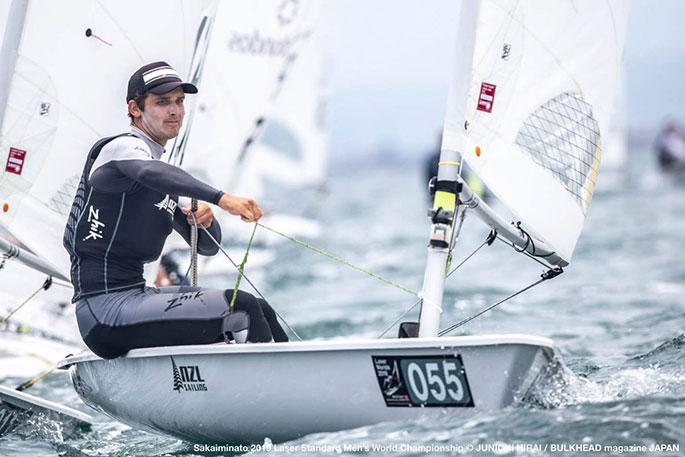 Tom Saunders enjoyed the best day of the Kiwis on the penultimate day of the Laser world championships in Japan. Photo: Junichi Hirai / Bulkhead Magazine.

Three New Zealanders are in the top 10 heading into the final day of the Laser world championships in Japan and it promises to be a real scrap for a place on the podium.

Tauranga's Sam Meech had a day to forget, finishing 39th and 21st in today's two gold fleet races, but he's still in fourth only four points behind Australia's Matt Wearn in third.

The fact everyone has at least one big score on their card - leader Tom Burton has the best drop with a 13th - means the table can get flipped around quite easily.

George Gautrey is the next best of the Kiwis in eighth, only 12 points behind Wearn, and Tom Saunders is another three points back in 10th.

The winds often varied on the penultimate day of the regatta between light and moderate, depending on what side of the course you were on, meaning big gains and losses could be made. For Meech, it was invariably the latter.

"I will try to forget today," he says ruefully. "I had amazing starts in both races but just made a few really bad decisions. In the first one I really dropped back on the second beat trying to make something happen and in the next race I did the opposite and that didn't work either so it was a really tough day out there for me.

"I think, unfortunately, the top spot on the podium is gone now. I haven't seen the points but figure I have fallen a long way back. I will just go out there tomorrow and try to get two good races in and see where I end up. It's a bit of a shame after it felt like I was going so well."

Meech has made a habit of finishing regattas strongly, and stormed through to claim a silver medal on the final day of last month's Laser European championships.

Saunders is aiming for a strong finish to the week as well and hasn't ruled out challenging for a medal.

He had the best day of the New Zealanders, finishing 18th and sixth, to climb into the top 10 for the first time this week.

"Most of the races seem to come down to one key decision on the first beat which has made it very mentally draining.

"I've managed to avoid any really bad races so far in gold fleet but, as we have seen, lots can change in one day.

"I just need to keep starting well and back myself tomorrow. I haven’t been looking at the results all week, but the podium has always been the goal."

At 21, Gautrey is the youngest of the trio of Kiwis but has been mixing it with the best this week, despite dislocating his knee two days ago.

He was 13th and 23rd in today's two races to jump seven places in the standings after the second drop came into play.

"It was a very tough day and I saw some big boys getting some big scores.

"The knee seems to be OK but I'm happy to have a couple days off hiking to let it heal.

"I'm just trying to keep moving forward. It's all to play for tomorrow so I need to try to capitalise on my opportunities and move up as far as I can."

A breeze of between five and 15 knots is forecast tomorrow, depending on what weather model you look at, which will keep everyone on edge. It's only natural after what has been a tricky week.

Results and standings after day 5 of the Laser world championships in Sakaiminato, Japan, yesterday (156 boats):