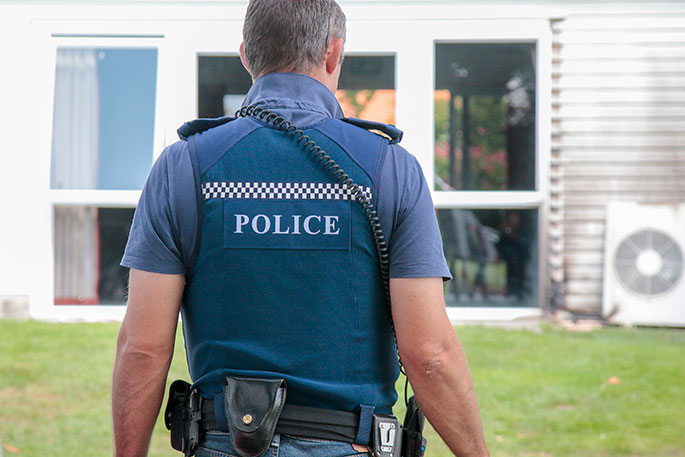 Police were called to a jewellery store on Tamamutu Street about 12.50pm after a man smashed a display cabinet and stole a number of watches.

As he fled the store, a staff member gave chase, tackling him in a service lane at the rear of the premises, says Detective Sergeant Andy Livingstone.

"Another person, thought to be acting as a getaway driver, was waiting in the same service lane in a stolen blue Mazda Familia.

"The driver has attempted to free his co-offender by running over the staff member who was restraining him with the assistance of members of the public.

"Fortunately for the staff member, the man has only run over his co-offender’s foot.

The driver then threatened the staff member and bystanders with a pistol before fleeing in the vehicle.

The car was later found empty but still running in nearby Motutere Street.

It has been secured for forensic examination, says Andy.

"A 25-year-old from Hamilton is in Police custody and is expected to face one charge of aggravated robbery in the Rotorua District Court tomorrow.

"Anyone who may have seen the blue Mazda or the driver between 1pm and 3:30pm in the vicinity of Tamamutu Street and Motutere Street is urged to call Taupo Police on 07 378 6060.

"It is incredibly fortunate that no one was seriously injured as a result of this incident but the actions of this driver and his disregard for the safety of others is of serious concern.

"I urge anyone with information about this matter to come forward and speak to Police."

The staff member from the jewellery store sustained minor injuries and is being supported by family and friends.