Scratching just beneath the blacktop 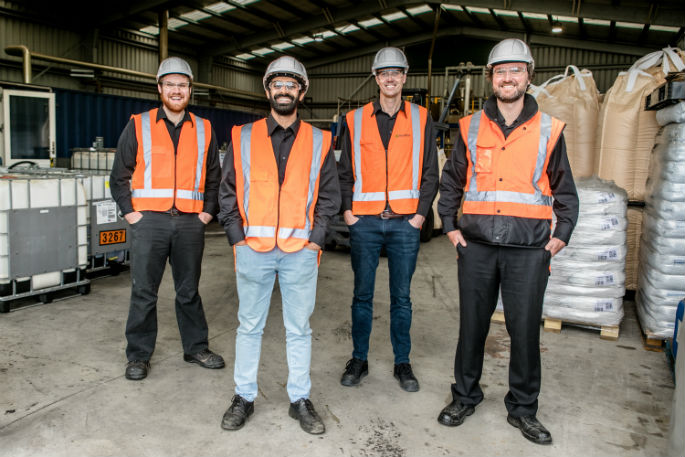 They were the guys that recycled plastic and turned it into blacktop – resurfaced 90 metres of a New Plymouth street with the stuff. Plas Mix they called it for obvious reasons

They are the guys at Road Science, a company at the heart of roading innovation based out at Bayfair.

And now they’ve also been recognised for their “innovative work” in eliminating health hazards in roading products.

But first plastic roads - that Taranaki asphalt included the equivalent of 83,300 yoghurt pots - part of 500 kilograms of plastic used in the road surface experiment. It was only 0.5 of the total weight of the asphalt, but there are plans to heft that ratio if the Road Science plastic road works.

At Bayfair, the Road Science team will soon be looking out over one of the flashest bits of roading infrastructure in the city – the $102 milion Baypark to Bayfair link upgrade and flyover - and reflecting on winning the WorkSafe New Zealand “best initiative to address a work-related health risk”.

“We challenged the team to not just mitigate the risk, but instead remove it completely,” says Road Science’s general manager, Murray Robertson. “And it was really pleasing to see the team work collaboratively to achieve a superb outcome.”

What they did was eliminate the risk of hydrogen sulphide being emitted when manufacturing and storing bituminous products – hydrogen sulphide, a colourless chalcogen gas that smells like rotten eggs but is even worse because it’s very poisonous, corrosive and flammable.

It naturally forms in crude oil and bitumen, but can occur in potentially fatal concentrations when mixed with other chemicals to develop polymer modified bitumen (PMB) roading products.

To improve the stability and performance of a PMB product, sulphur is often added to create a cross link. “This is a bond between the different polymer chains and the bitumen, ensuring the two entities work to hold the road together, therefore improving the product’s lifespan and eliminating the need for frequent road repairs,” says process engineer Nik Vishwanath.

While adding sulphur is common practice in creating PMB products, a by-product of this is an increase in H2S. As such, Road Science sought to improve the health and safety of their work place through reviewing their current control processes for H2S.

The Road Science team developed a chemical substance, called a ‘scavenger’, that would react with the H2S and turn it into an inert, non-hazardous compound – in this case, zinc salt. “After lab tests and small-scale trials showed positive results, we created a system which added the scavenger to our current PMB products.

“We then measured the H2S levels in our tank vents and the manholes of our trailers, where the concentrations had been the highest. Within half an hour, the H2S levels were down to zero.

“It was a great outcome – we had sought to reduce the H2S to safer levels, but this was eliminating it completely.”

Following the project’s success, a full scavenger addition system has been built at Road Science’s Lyttelton manufacturing plant and is currently operational.

Now standard practice, it is due to be rolled out at the Mount Maunganui manufacturing site in coming months. Nik says it was hugely rewarding to be part of an initiative that didn’t just reduce a significant workplace risk but eliminated it completely.