Meech still in the mix at Laser world championship 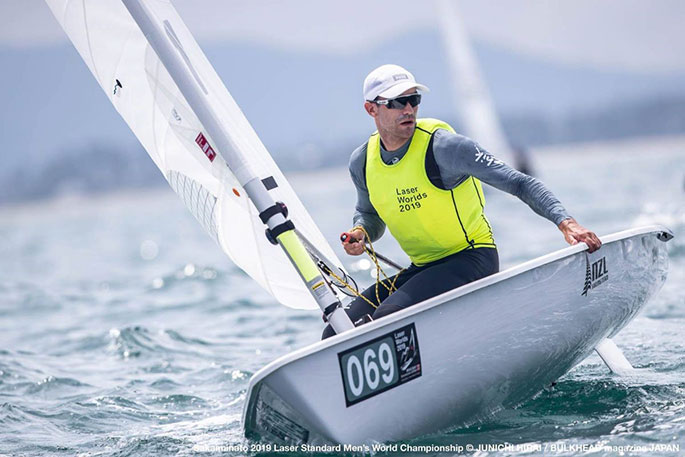 The leaderboard was mixed up significantly on the first day of gold fleet racing at the Laser world championships in Japan, but Tauranga's Sam Meech is still right in the hunt with two days remaining.

The top 52 boats battled it out on the waters off Sakaiminato and it was a battle at times.

The fresh winds that had blown through on the previous two days had eased but it left a confused sea state and big swells.

Few of the contenders emerged unscathed, with Olympic champion Tom Burton posting the best scores of the day - eighth and second - to jump to the top of the standings. He now holds a six-point advantage over Meech, who was 17th and eighth, with Sweden's Jesper Stalheim another four points behind in third.

Tom Saunders (15, 11) continued his progression up the leaderboard and is now 11th but George Gautrey (4, 38) slipped eight places to 15th. Gautrey has been battling over the last three races after dislocating his knee.

"I had a bad tack near the top mark in the last race and my knee wouldn't bend," he explained. "I looked down and my knee cap was off to the outside. I had to put it back in place and finish race using one leg.

"My knee seems fine enough to race, I just cant be quite as aggressive as I would like. I'm going to need to keep my head screwed on over next couple of days."

Meech wasn't too disappointed with his results, especially in light of the fact so many struggled on day four. A second drop will also come into play after two more races which will mean it's a moving feast right up until the conclusion of the regatta.

"It was a very difficult day," Meech admitted. "I didn't have a terrible day but I also didn't have a great day. There are still four more races to go and in these regattas it really does come down to the last race when everyone's discards come in.

"We have two more days with conditions that look like a lot of points can be thrown around. I'm just going to keep trying and hope it ends up well."

Meech has been one of the world's most consistent Laser sailors over the past couple of years, and has already pocketed three silver medals from three regattas this year, but is still searching for a first world championship medal. He was fourth in Aarhus last year after leading for the first half of the regatta.

Saunders was another who had a decent day in the circumstances but was still left feeling a little frustrated with his return.

"It was quite light but we still had some big swell and chop which made sailing in a straight line quite difficult, let alone trying to look around for pressure," he said. "My top-mark roundings were good but I bled some places on the second beat - there was a lot of leverage which was a bit too stressful. I limited some damage but leave the day with a lot of what ifs."

Youngster Josh Armit is racing in silver fleet and is 84th overall while Luke Deegan is in bronze fleet and is 139th.

Results and standings after day 4 of the Laser world championships in Sakaiminato, Japan, yesterday (156 boats):