Council to be taken to court over climate change 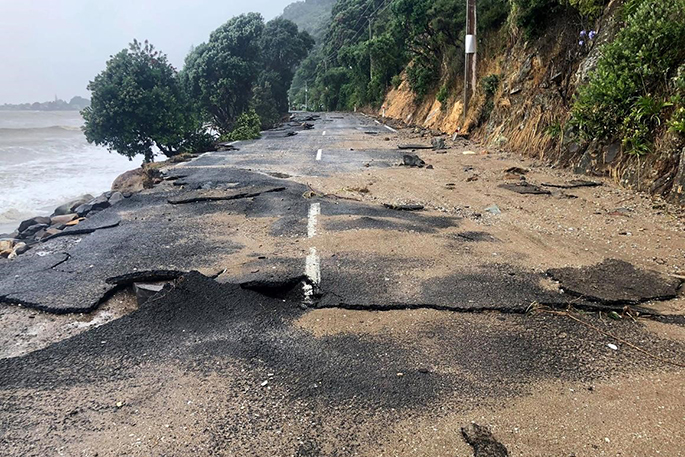 Damage sustained to the Thames Coast Road in a massive storm.

The Hauraki Coromandel Climate Action Inc have applied to the high court for a judicial review of the decision of the Thames-Coromandel District Council not to sign the Local Government New Zealand climate change declaration.

HCCA is seeking to have the decision declared unlawful and an order that it be quashed.

In a statement from HCCA on Wednesday, it says their judicial review application contends that TCDC erred in law by failing to properly consider the local government act, TCDC’s own policies relating to climate change and engagement with its communities, and the global consensus on human-caused climate change.

The application also contends that it is unreasonable for TCDC to decline to commit to ambitious plans to reduce greenhouse gas emissions when there are significant predicted adverse effects from climate change for the Thames Coromandel District, New Zealand, and the planet.

“Predicted local impacts include an increase in sea levels and the frequency of coastal flooding and erosion, greater risk of fire and drought, negative impacts on biodiversity and bio-security, and oceanic impacts such as acidification in the Firth of Thames,” says HCCA chairperson Denis Tegg.

“In light of these potentially grave threats to our communities and the overwhelming global consensus on climate change, it is alarming and distressing that TCDC has not joined 65 other mayors and chairs and signed the LGNZ declaration.

“The only material TCDC considered before making its decision was a short report from Mayor Sandra Goudie who was against signing the declaration.

“In preparing her report, the mayor failed to understand or did not accept the scientific consensus on the predicted impacts of human-caused climate change. The mayor has made public statements to this effect.

“It’s highly unusual for councils to make significant decisions such as this without first considering thorough analysis from senior staff.

“The fact that the only material presented to TCDC was from the mayor who had refused to say whether she agreed humans were causing climate change, gives us no confidence that robust lawful decision-making processes were followed,” says Denis.

A spokesperson for the Thames-Coromandel District Council says council is making no comment as the issue is now before the court.

At the start of April, when it was announced the council would not sign the declaration, a press release on their website says they were already committed to working on many of the initiatives with the declaration itself.

These include: supporting walking and cycling infrastructure within our communities.

Supporting a public transport service in Thames and the uptake of electric vehicles through working to develop a network of charging stations across the district.

Proactively engaging with our coastal communities on shoreline management plans that will identify long term management strategies for each coastal community, and will take into account projected sea level rise scenarios associated with climate change.

Advocating to central government on leading the response for small coastal communities like ours when it comes to possible threats to infrastructure, private property, the local economy and livelihoods.

Mayor Sandra Goudie said at the time, the decision not to sign the declaration does not mean council does not take climate change seriously.

She says the initiatives described in the declaration have not yet been canvassed across the district and have unknown financial and legal consequences.

In her view, the declaration has the potential to be a legally binding document, and council and individual elected members could be at risk if it did not uphold all the initiatives.

"This declaration doesn’t indemnify us from action or inaction," Mayor Sandra says.

She pointed to an example where Forest & Bird took the New Plymouth District Council to the Environment Court in 2015, saying it was in breach of its Memorandum of Understanding in a case involving significant natural areas.

"The only way we can be protected is if Government indemnifies us, so we are vulnerable either way," says Sandra.

“There have been statements out there that I’m a climate change denier – this is patently incorrect and misrepresents the facts.

“Our Council will continue to take action, following robust decision-making processes, in response to climate change for our communities.”

The council passed a resolution asking staff to take a broad view of the actions undertaken to mitigate the drivers of climate change and to scan how other councils are responding to carbon management and the reduction of greenhouse gas emissions.

For more information about what the council is doing towards climate change, click here:

First it was global warming, and ’scientists’ were proven wrong, so to steal the same amount of money from Citizens, who are already taxed out of our brackets, the name was changed to climate change which is ALSO not man caused. So GOOD on People, take all these money stealing councils and Government to court

....and if hopefully this group of misinformed activists are successful, other groups around the country can take their individual councils to court to reverse the decision to declare a ’climate emergency’ then...is that how it works?