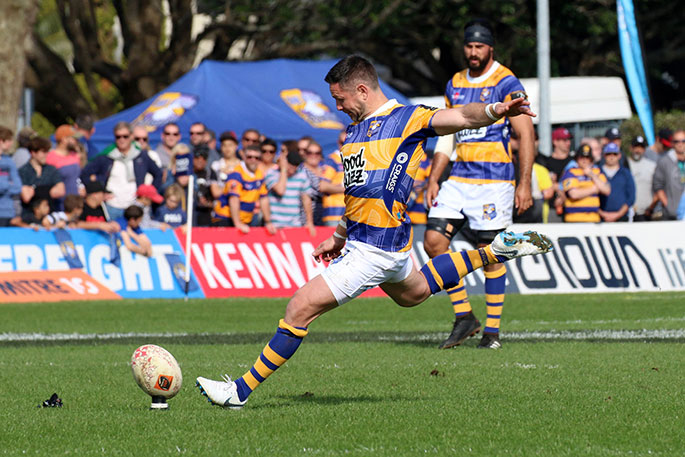 Former BOP Steamers legend Mike Delany is contributing to the side this season as an assistant coach. Photo: Chris James.

All Black Mike Delany, who played 77 games for the Bay of Plenty Steamers, can now add assistant coach to his impressive resume.

Playing 13 years of professional rugby, Delany says he is enjoying his new role.

“I’m really grateful for the opportunity Clayton has given me. It’s something I’ve always wanted to get into and being fresh out of the game, I think I have a pretty good understanding of what players are going through and the way the game is being played.”

Steamers head coach Clayton McMillan says he is excited to have the trio join the team.

“I’m confident that they bring some energy and new ideas that will help us. Their work ethic and their eagerness are really transparent for other people to see and I’m sure it’s rubbing off on the players.”

Rogers and Bourke coached the Bay under 19 men’s squad to the Union’s first national provincial title in 42 years.

“They’ve come through a traditional coaching pathway, coached at club level, age grade level sat and been on numerous coaching courses, so they’ve done their time and they’ve also had some success.”

Bourke says he has learnt a lot moving up to the Steamers.

“I’m loving the environment. This is what you aspire to do. I enjoyed the challenge of what came with coaching the under 19s. I think the biggest part of that success was built on them believing in themselves and playing with a bit of freedom. A lot of those players have moved up to the Steamers and it’s great to see them furthering their career.”

McMillan will be the defensive coach, Rogers will focus on the scrum, ball into contact, the breakdown and collision areas, while Bourke and Delany will focus on attack, kick strategy and counterattack.

McMillan comments, “we’ve been working really hard for the best part of six months to establish a good rapport and get really aligned on where we think the team needs to head and how we’re going to go about achieving that.”

Delany has played under a long list of high quality coaches from all over the world and has accumulated a lot of knowledge which has accelerated his ability to come into this role as a skills specialist McMillan says.

“But his most recent exposure was with the Crusaders last year when they won the Super Rugby title for the ninth time. Those experiences are not easily replicated even for the hardest working coach. I think it brings a pretty good balance to our coaching team.”

A Bay of Plenty selection team will play a game of three halves between Counties Manukau and Wellington at Moore Park, Katikati on 3 August at 1.30pm.

The Steamers Mitre 10 campaign gets underway with a home game against Otago at Tauranga Domain on August 11 at 2.05pm.