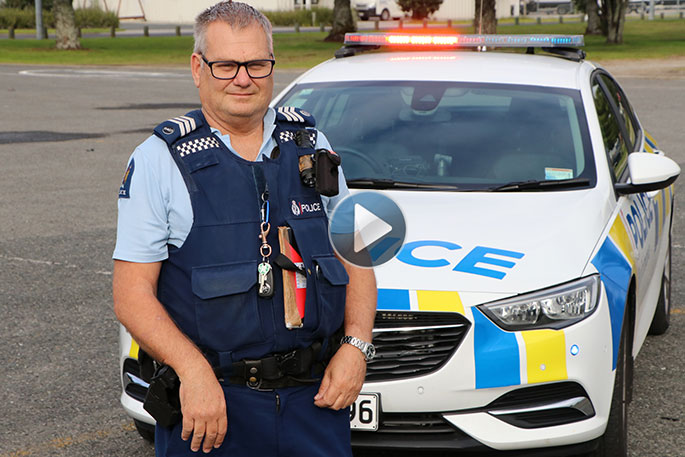 Belt up, don’t drink and drive, put your cell-phone away, and don’t speed is the number one message from Acting Senior Sergeant Wayne Hunter.

He has been to a number of crashes over his 42 years of being a police officer and says what causes these crashes is driver inattention.

SunLive sat down with Wayne to hear his point of view on crashes in the area and what goes through their minds when they get a call to a crash.

From June 1 to July 1 2019, SunLive reported on 57 crashes ranging in minor injuries to fatalities.

From a member of the public’s point of view, whenever you hear about a crash you immediately assume the worse, and Wayne says they do the same.

“We always think the worst and then that way we are not surprised when we get there,” he says.

“The first things that goes through my mind is; how many vehicles are involved, is the road blocked, and is there any other emergency services we need such as fire and power.

“So that’s my first call and what I think I need, and then on the way to the scene I direct other staff that I think need to be there.”

Wayne says attending crashes affects police officers as well, but after doing it for as long as he has it doesn’t affect him as much as it once did.

“It is a requirement all road policing staff have to go to counselling every six to 12 months, and I must admit I haven’t been for a while because I don’t think it affects me anymore.

“Generally we try to think further on. We don’t think about the person, I know it sounds bad but we’re there to do a job and to do the job properly, we’ve got to concentrate.”

One crash that still sticks with Wayne to this day was a crash at Aongatete with five Tongan kiwifruit workers.

“That really took a while to get over because there were five people involved, they were killed and more than that they had families back in the islands who these people were supporting and then that was going to affect them as well. So yes, it did affect me quite a lot in that one.”

Wayne says when something like this effects them, their sleeping patterns drastically.

“The biggest part is because you’re always over analysing what you did at the scene, could you’ve done something else?

“And also you’re thinking about the people who died and their families and everyone else that’s effected like my other staff, fire, ambulance, and other personal. There’s a whole lot of things that go through your mind. It’s a mind game.

“So what we are trying to do now is we do what we call a hot debrief were within a week of a serious crash, especially a fatality, we’ll have a meeting with all staff involved and we’ll just thrash out any issues that we’ve got.”

“It’s not the roads, it’s drivers, but on saying that if you look at State Highway 2 north between Bethlehem and Katikati, in the old days you could run off the road and hit the bank on the other side. Because traffic volumes are so great, the chances are when you run off the road and cross the road, you’re going to hit somebody else coming the other way.

“That’s the big issue. It’s not the roads, it’s the people driving, not paying attention to the speeds, not saying they are speeding but they are not paying particular attention to speeds going around corners. Some corners you can’t take at 100km, but people do try and do that.”

He says the reason for crashes getting worse and that they are becoming more frequent is because of the traffic volumes in the Bay of Plenty.

“The local authorities are doing a lot on the roads to minimise these crashes.

“You notice out at Aongatete, we’ve got the wire rope and if you ever see how much damage is caused to those, that’s who many crashes that it’s stopped and the one towards the Bethlehem shopping centre, I know of five that have hit that and if that wire hadn’t have been there, they would have gone across the road and possibly hit another car or truck coming the other way.”

In his opinion, there isn’t just one spot that is notorious for crashes.

“SH29 used to be and we policed that and we’ve got it back to a manageable level.

“And so you know that if you speed, chances are you’re going to get caught.

“Any time of the day or night and peak times you get the minor crashes, the nose to tail and that's downright just an inattention and following too close. They speed up, people following other vehicles as you'll notice is very very small.”

Wayne’s message to the driving community of the Bay of Plenty is simple: “Belt up, don’t drink and drive which is obviously the no-brainer on that one there and distractions are a big thing. Leave your cell-phone in the console, at home, turn it off, don’t use it when you are driving, and speed. Speed is a big one because speed kills as everybody knows.”

Karolt,I had a month in Canada last year and was very impressed with the manners of drivers and pedestrians Instead of traffic islands which favours the give way to the right,and you cant get into lane,they have mainly compulsory stops and you give way to the first person there.it works very well.The problem here is that a lot of drivers dont respect other drivers on the road and road signs.Just witness the number of red light runners in Tauranga.We need a policman at intersection and to cull these drivers of their license. .

I am in Poland at the moment and have travelled through a few countries where the drivers have been very courteous to everyone including pedestrians, have only seen a few accidents, nothing major. Not looking forward to getting back to tauranga traffic.

Yes, drivers make errors, and we can blame them all day long, while people continue to die. We could also put a safety mechanism in, called a safety median barrier to help keep people alive, when those drivers do make errors.

So its belting up and cell phone, speed, dring............ mmm not what i see its more attitude, drivers ability, passing on corners, passing on yellow lines etc more likely.

No use preaching to those that use their cell phone while driving.They dont read this.Be a mufti at Chapel St ,Elizabeth, 11th Ave and a couple of police will be kept busy issuing tickets..With people when sitting their license,have the tester arrange for a random phone call to the student during the driving test and check for thier reaction,you will soon pick out the one that uses their phone while driving as a learner