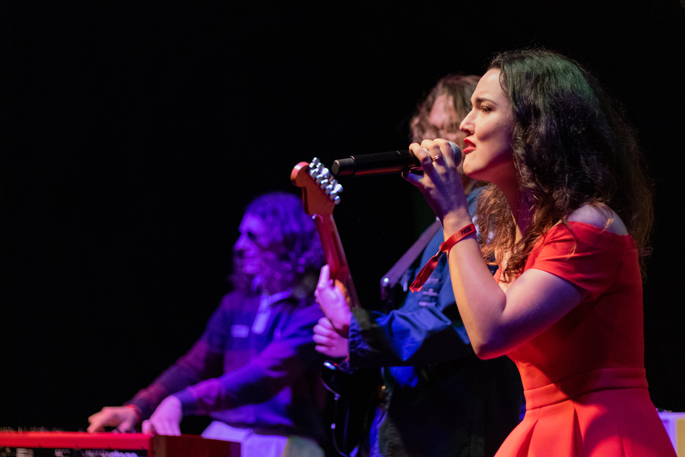 An Otumoetai College's Delta has taken out first place at this year’s Bay of Plenty regional Smokefreerockquest final at Totara Street on Saturday night.

The band named Delta, who play jazz-funk fusion, have been performing together for 9 months. Singer Emily Ardern says the band were absolutely stoked with the win.

“There was very tough competition this year so we were nervous about the results,” says Emily.

“When they called our names out we were ecstatic to hear all our hard work had paid off.”

Second place in the band category went to Elevar from Mount Maunganui College.

Delta join solo-duo winners for Bay of Plenty including Louie Campbell from Katikati College, Bree from Katikati College and Max Harvey from Rotorua Boys’ High School with the opportunity to submit a video of their original material for selection as one of the top 10 national finalists to play off at the Bruce Mason Centre in Auckland on Saturday September 14.

For founder and director Glenn Common, the potential of each new round of regional finalists is reflected in a music industry full of past participants.

“It’s fascinating for us to look back at success stories like Kimbra, Marlon Williams and Broods where we could see the star factor right back at the regional level,” he says.

“Each event gives a new cohort of bands the opportunity to take their obsession with music and develop the organisational and stagecraft skills that will help them become another Kiwi music success.”

The full list of awards for Bay of Plenty is:

Smokefreerockquest powered by Rockshop, has national winners’ prize packages for bands and solo/duo winners, including $22,000 in Rockshop vouchers, $16,000 NZ On Air recording, video and promo package, a photo shoot and branding package from Imaginary Friends.

Smokefree Tangata Beats standout successes include Alien Weaponry, Strangely Arousing, and Nesian Mystik, the only New Zealand band to ever have ten singles all certified gold or platinum.