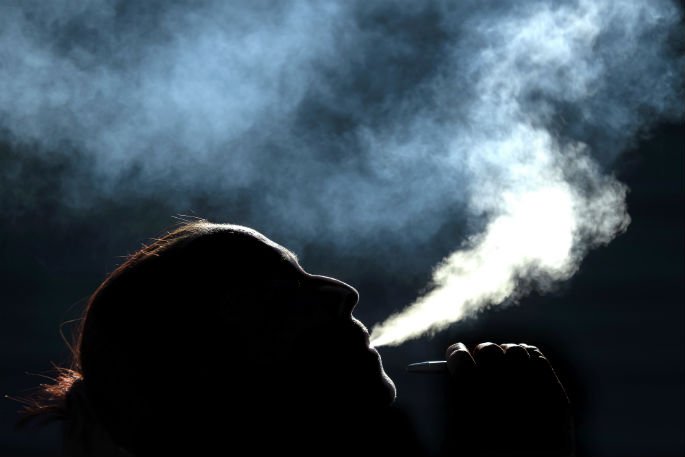 Vaping is working as an alternative to smoking for Alana Ibbetson. Photo: John Borren.

Alana Ibbetson’s engaged in the fight of her life – a battle against one of the most addictive of toxins, nicotine.

“May 2, about two months ago,” the Papamoa mum fires back when asked when exactly she had her last cigarette. Any lapsed smoker could also probably tell you the exact hour, the exact minute.

She is vaping on the recommendation of the cavalry which came to her rescue, the Bay of Plenty’s free stop smoking support service called Hapainga – “the uplifting journey” - which is carrying Alana along.

“I tried cold turkey – didn’t work. Tried patches but couldn’t cope with the vivid, weird dreams that came with it.” And the vape was just enough to kill the urge to pick up another cigarette.

“It’s a lot easier to stop vaping than quit smoking all over again. And that’s why no way in hell do I ever want to pick up another cigarette.”

Alana’s sharing her ordeal to assist others with their struggle and to encourage others with half a mind to quitting to take up the struggle. And it becomes a team game, because riding shotgun for Alana is one of the country’s top three services for its successful quit smoking rate.

“It’s the support more than anything,” says Alana. “Having regular check-ins from your coach makes you accountable. It imposes discipline that most smokers don’t have.”

It’s the discipline that comes with someone standing in front of you and saying: ‘hey, are you still smoke free?’ and then having the honesty tested. The smoking cessation practitioners use a carbon monoxide tester, like a breathalyser. It tells the coach immediately whether you have been cheating.

“You can’t lie about it,” says Alana. “Those are the things helping.”

It’s been a 20-year habit for Alana – at worst 20 a day, at best, just before she quit, five a day. Times and attitudes were different when she became a hard-out smoker when she got to high school. It was learned behaviour – her parents and all her friends smoked. It was also expensive behaviour.

“Thirty grams of tobacco, $70, and a packet of tailies.” Another 20-something dollars a week. “Vapes are much cheaper and I must be saving at least $50 a week.”

And the reason why she quit was her kids. “My wee boy Max was quite sick when he was born - spent the first week of his life in hospital. It was pretty hard to watch him and smoke at the same time. Something had to give and Max wasn’t going anywhere.” There’s laughter and tears. “And that’s when I decided I had to stop.”

Another motivating factor was Alana’s Mum. “She has emphysema from smoking. I don’t want my kids to see me in that condition in another ten years.” Emphysema – one type of chronic obstructive pulmonary disease which leads to shortness of breath and impacting daily activities. It can be managed but there’s no comeback.

“I tell myself I have quit smoking,” says Alana. “I can’t say I never would smoke again but I like to think I won’t.” And she is feeling empowered rather than dependent. “That feels good.”

And her advice to the tempted? “Don’t do it. You think one or two cigarettes would be fine, but one or two leads to another day of one or two, and before you know it you are trying to quit an addiction.”

For more information call the team at Hapainga – the Stop Smoking Service on 0800 Hapainga or 427246.