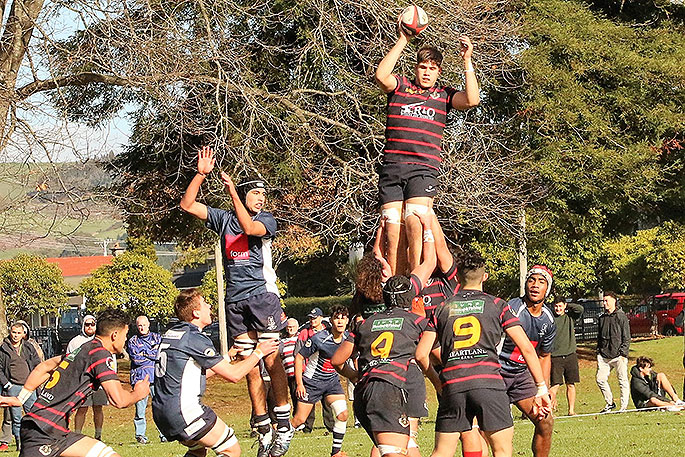 If you had asked the coaches of Rotorua Boys’ First XV what a good start to the Super 8 season would be, they would have settled for three wins from the opening four games.

Rotorua were set a tough assignment with the powerful Hamilton Boys’ and Hastings Boys’ teams scheduled to be played away from home on consecutive weekends in the first month of the competition.

After winning their opening match at home against a tenacious Tauranga Boys’ outfit 29-13 and taking care of Gisborne Boys’ 57-5 on the road, it was time for the crunch games against Hamilton and Hastings.

Hamilton is rightly regarded as the team to beat every year with a record in the Super 8 competition that began in 1998 between the top eight boys’ schools in the central North Island.

It took Hamilton Boys’ nine seasons to claim their first Super 8 championship in 2006 but they have been almost unbeatable ever since, winning 11 of the last 13 championships contested.

Two weeks ago, Rotorua travelled to Mooloo town and ran out in front of a raucous home crowd against the defending champions.

Despite the odds stacked against them and having to withstand territorial and possession domination by Hamilton, it was Rotorua who won 18-13.

Rotorua’s coach and co-director of rugby Ngarimu Simpkins was proud of how his boys defended for such long periods and then had the patience and skill to score on the counter attack.

That win made it three from three for 2019 and set up the long road trip to Hastings for a showdown with the 2016 and 2017 champions played last Saturday.

Perhaps all the travel finally caught up with the Rotorua team, who had also toured Europe pre-season, as they found the dazzling backline of the home team too hard to handle.

Hastings jumped out to a 20-7 lead at halftime which proved to be the decisive factor as they ran away with the match 39-21. Rotorua scored a penalty ty in the first half with Stuart Leach and Kane O'Connor crossing for second half tries and Ceiza James adding two conversions.

Rotorua now have Napier Boys’ at home this Saturday (12pm kick off), Palmerston North Boys’ away on July 27 and New Plymouth Boys’ at home on August 3. The final is set down for August 10.