Kermadec earthquakes: what you need to know 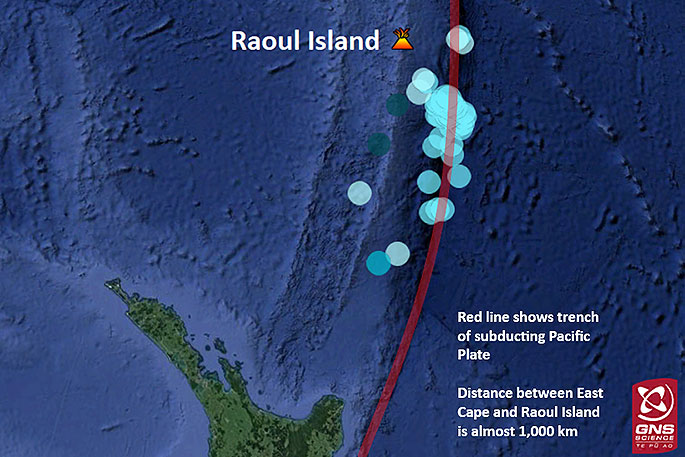 Location of Raoul Island in the Kermadec Islands and earthquakes over M5.0 in the last month (20 May – 20 June 2019). The subduction zone north of New Zealand is visible in red.

The Kermadec Islands region north of New Zealand is quite a seismically active place.

Following the magnitude 7 earthquake on June 16, GeoNet has released information about the region and what earthquakes there mean for people in New Zealand.

Why is the Kermadec region such an active area?

“This trench is a subduction zone where the Pacific Plate is diving westwards under the Australian Plate, just like what is happening below the North Island.”

The region of the Sunday 16 June M7.0 earthquake is subducting faster than that of the Hikurangi Subduction Zone.

The Sunday 16 June earthquake did generate a very small tsunami at Raoul Island – about 0.1m at the two tsunami gauges operated by GeoNet on the Island.

“This is not large enough to be regarded as a threat,” says John.

“An earthquake in a similar location would probably need to be in the high M7s, close to M8, to produce a tsunami large enough to be a land threat to New Zealand.

“Our magnitude for this quake is M7.0, however, these events are outside the GeoNet network so our magnitude is less than the international agency estimates of around M7.2. “We are planning to put out some information soon explaining what different magnitudes mean and why they often differ.”

Which parts of the country would be most vulnerable to such a tsunami?

The most vulnerable parts of New Zealand would be the areas along the upper North Island nearest to the epicentre, i.e. parts of Northland/Auckland/Bay of Plenty/East Cape.

If the earthquake is large enough, the entire coast of New Zealand would be variously affected by tsunami inundation.

How long would it take to arrive?

Travel time would be affected by the location of the earthquake. At the southern end of the Kermadec region, it could be less than an hour.

“If the quake originated further north, it could take about two hours for the first waves to hit the New Zealand coast,” says John.

Staying safe – what should we be aware of?

“It’s important to remember that in seismically active zones, large earthquakes can occur at any time.

“It’s well known that earthquakes occurring in the Kermadec region have the potential to generate tsunamis.

“Kermadec earthquakes are not likely to be strongly felt at all of New Zealand’s tsunami prone coastlines, so it’s important that people know the correct actions to take for a tsunami and how to stay informed - via radio, Emergency Mobile Alerts, social media, and the Ministry of Civil Defence & Emergency Management (MCDEM) website.”

New Zealand’s entire coastline is at risk of tsunami inundation – it’s part of the risk of living on such an active plate boundary in the middle of the ocean.

Make sure you follow all instructions in official warnings, and if an evacuation warning is issued, get to higher ground immediately.

You can check out Civil Defence’s website for tsunami safety tips - www.civildefence.govt.nz/get-ready/get-tsunami-ready/

How will you know to evacuate?

If you feel a long or strong earthquake, or receive a tsunami warning alert, get to higher ground immediately. Walking or biking is the best mode of transport following a tsunami warning to avoid road congestion.

“Our 24/7 National Geohazards Monitoring Centre and GNS scientists monitor activity in this region and we work with MCDEM to ensure that warnings are issued as fast as possible.”