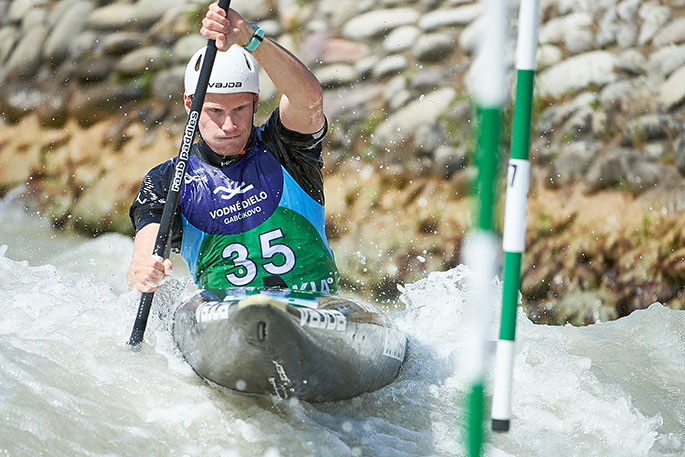 Finn Butcher on his way to 13th in the men's K1 at the canoe slalom World Cup in Slovakia. Photo by Marian Trizuliak Photography

Kiwi kayaker Finn Butcher was just 2cm away from yet another canoe slalom milestone at the second ICF World Cup of the season in Slovakia overnight.

The Alexandra paddler finished 13th in the semifinals of the men's K1 - a personal best - with only a slight touch on Gate 21 keeping him out of the final.

His performance capped a dream fortnight for the eight-strong New Zealand team; Luuka Jones picked up silver in the women's K1 over the weekend, Callum Gilbert finished fifth in the men's K1 last week in London and teenager Hannah Thomas ended up 21st in the women's C1 overnight.

Butcher's semifinal run of 92.55secs was just 3.69secs behind top qualifier Hannes Aigner (Germany), and only 1.20secs outside the top-10 that went through to the final, with his 2sec penalty proving crucial.

"I was gutted about missing the final but fizzing about how my paddling went - I guess you could say we have turned a corner and we really think we belong with the best in the world now, which is a massive step," says Butcher.

"My semifinal run pretty much went exactly how we had planned, although I had to catch up to myself a little bit through gates 18,19 and 20 and that probably put me into 21 with not quite the dynamic I would've liked. Even then, there was only about 2cm in the touch - it was just so fast down the bottom drop and you’re jumping into a strong eddie so you have to be careful where you place your boat."

Butcher admitted the performances of Jones and Gilbert in particular fired him up for his run, while crediting New Zealand coach Pierre Labarelle with taking his mental game to another level this season.

France’s Claire Jacquet broke through to win gold in the women’s C1 final, her first medal since 2012, while Slovakia’s Andrej Malek thrilled the home crowd with his first ever medal by winning the men’s K1.

Jacquet posted a time of 112.15, to just squeeze out Andorran teenager Monica Doria Vilarrubla on 112.32. It was Vilarrubla’s first ever world cup medal. Brazil’s Ana Satila took the bronze in 113.32.

Thomas recorded a solid 137.05sec run in her semifinal, leaving her 13secs outside the final.

Malek, meanwhile, headed a new look podium in the men’s K1, with the Slovakian posting 88.54 to win his first ever world cup medal.