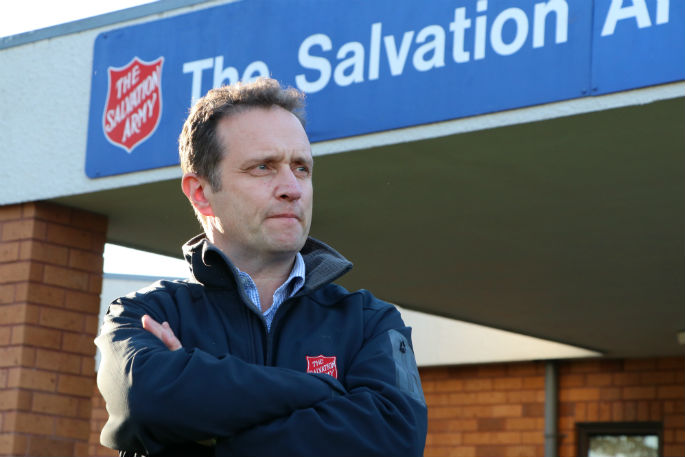 The cash-strapped, low income loan seeker has a powerful and willing new advocate in town – a former London stockbroker with a pedigree in accountancy, derivatives, corporate liquidations and the like.

“They’re not desperate people, but they’re people who need, rather than just want, a lot of things they can’t afford and our loans are making things achievable for them.”

The typical profile of a loan seeker is a beneficiary, in many cases a single parent. “There’s a certain amount of financial exclusion in this area,” says Sean. “If there’s a suggestion of bad credit or maybe a few missed payments, it doesn’t have to be much, it’s ‘no thank you, you are excluded’. Even if a customer has an overdraft, however small, they’re not given a chance to get a loan, even with a bank they’ve been with for a long time.”

The Salvation Army’s offering two community finance, low-income loans. One is a no interest loan of up to $1000 for a maximum of 18 months, which is funded by the Army. It could be for essential household goods and services such as dental work, white goods, furniture or glasses. The second is a low-interest loan of $1000 to $5000 at 6.99 percent for a maximum 36 months.

“Cheaper by two thirds than a typical unsecured loan and for higher cost assets like cars,” says Sean. Up to 80 percent of those loans through the BNZ are for cars, because buses aren’t an option for a lot of people.

The loans can’t fund fines, bills or non-essentials like holidays and they can’t be used for debt consolidation. They have to be for a new asset or service.

Some of those seeking loans would have gone to other loan agencies, expensive credit people, and struggled to pay off loans. “And,” says Sean, “they have found a $4000 car has suddenly become an $8000 dollar car because of repayment problems and associated fees.”

That does not happen with the Sallies’ loans according to the Army’s community ministries manager, Davina Plummer. “Because when there are issues with payments, we work it through with them and get them back into repayments. This is not for profit, completely not for profit and one of the big benefits is there are no fees. As opposed to saying you have defaulted, off you go and here’s the bill for the default fees.”

She says the Army looks for reasons to assist rather than say no. “Generally when there’s a glitch with payments, there’s a good reason, something has happened and we can support them through it.”

The Army in Tauranga gets up to 20 email and phone loan inquiries a day which has led to 500 interviews and conversations in three years. “It tells us it’s not getting any cheaper to live,” says Sean.

“If your mortgage or rent is over 40 per cent of your income, plus your power, you are struggling, it’s tough to live. That makes it hard to get a loan.” Sean is dealing with people from 40 to 60 per cent and lots of them.

Davina suggests it’s also more expensive to be less well off. “Those with money can afford a late model car that is not going to break down. The less well-off have to buy a cheaper and less reliable car which breaks down more often and they end up in a cycle of expense.”

Another upside to the loan process is the financial education that comes with it. “The financial conversations,” says Davina. “If someone comes in, goes through the processes and maybe doesn’t have the loan approved, they have still learned a lot in the process.”

And even someone doesn’t qualify for a loan, the Salvation Army tells them how they can get the loan. “They will go away, do a financial health check and then come back.”

There are also misconceptions like people thinking they have bad credit. “Bad credit isn’t having a lot of credit. It’s having badly managed credit,” says Sean.

He may look at someone’s assets and find just $50 in the bank account. “But they’re worth how much their salary is, how much money they generate. That’s when we can make the most of their financial assets.”

And the one thing that knocks most people out of a loan is the credit check - but a credit check can be satisfied if a weekly amount is being applied to a debt. “It might just take a few phone calls to get payments started at an affordable level which is what I try to do – make it happen.”

For more information go to: www.stepuploan.org.nz

I think it would be SO beneficial to do debt consolidation loans too or even an advance to clear a credit card (with the proviso that NO MORE debt is incurred elsewhere). I say this because for a lot of people REALLY struggling, they often have debts with ’loan sharks’ because it was simply the only way they could get any kind of loan. Well done otherwise though, brilliant effort!