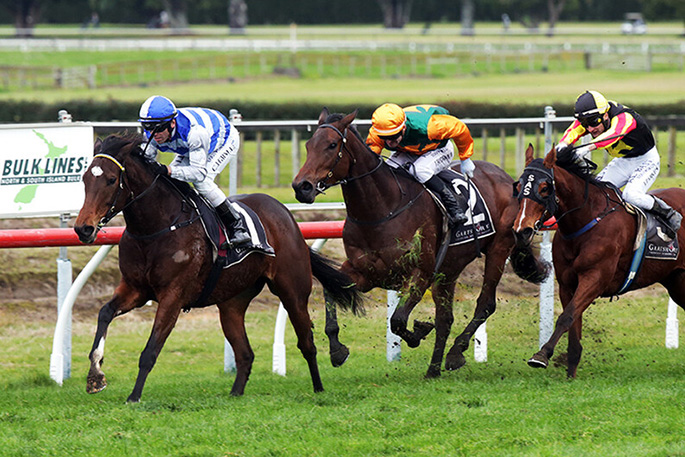 Sleeping Beauty is clear of Art Deco (outer) and New York Minute as she heads to the winning post at Tauranga. Photo: Trish Dunell

Class performer Sleeping Beauty underlined her credentials on the deep winter tracks when she out-toughed her female rivals to take out the Listed Ultimate Ford and Mazda Tauranga Classic (1400m) under weight-for-age conditions at Tauranga on Saturday.

The six-year-old Rip Van Winkle mare has fashioned an impeccable record on wet tracks having now won five of her ten starts, along with a further three placings on tracks rated in the Heavy range.

Faced with a puggy Heavy11 surface, the Lance O’Sullivan and Andrew Scott-trained runner took no prisoners as she bounced well from the starting gates to sit outside pacemaker New York Minute throughout.

Rider Craig Grylls took the initiative with 700m to run as he drove his charge to the lead before establishing a winning break shortly after turning for home. Despite feeling the effects of her earlier exertions in the final 200m, Sleeping Beauty rallied gamely to win by a length and threequarters from Taranaki visitor Art Deco with New York Minute a nose back in third.

Co-trainer Andrew Scott paid tribute to the gritty nature of his charge after the race.

“She was up on speed and Craig had to make a move on her which had us worried that it might fire her up, but she has kept up a really strong gallop,” he said.

“She’s just so versatile and can handle any ground, she’s just a really good racehorse.”

Bred and owned by Sir Peter Vela, Scott was quick to mention how the victory would be received at Vela’s Pencarrow Stud operation.

“We were out at Pencarrow Stud on Monday and all the staff out there will get a great kick out of this,” he said.

“They all work hard in behind the scenes so to see this mare crack on and get the money makes it a good team effort.

“She seems to be getting more tractable and is learning to race.

“It is very encouraging so fingers crossed we can crack on to the Foxbridge Plate (Gr.2 1200m) and those early stakes races.”

Grylls was also impressed with the effort by his mount who made it two black-type wins in a row after taking out the Gr.3 Rotorua Stakes (1400m) at her last start.

“She jumped really good although we had to do a bit of work to get outside the leader,” Grylls said.

“She settled nice and travelled really strong throughout and I was just hoping that she would keep going through it (the ground) when I let her head go.

“I could hear them coming but she had done enough so it was a good effort.”

A daughter of Danehill mare Kailey Princess, Sleeping Beauty has now won ten of her 23 starts and over $238,000 in prizemoney.