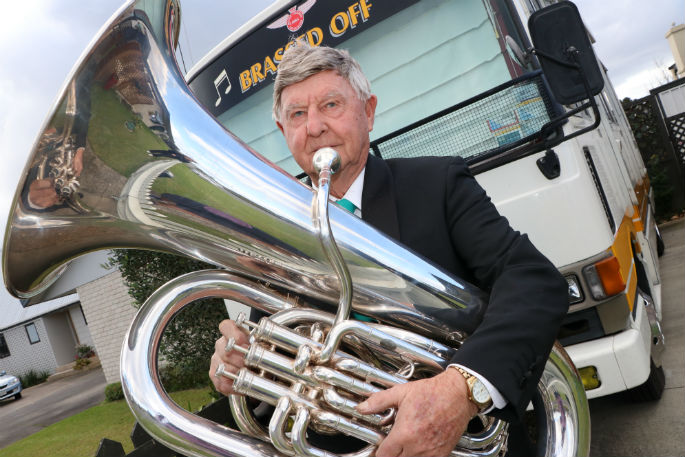 Alex Garrett is celebrating his 70th year as a brass band player and he hasn’t taken a break in that entire time.

“It has been my life,” he says. “I might have missed one contest when we built our new house in Hawera but other than that I have been continuous the whole way through.”

“I really enjoy playing in the brass band, right to this day, I suppose it’s pretty special. I’ll be playing it as long as I can.”

Alex grew up in Eltham, Taranaki and joined the local brass band when he was nine years old, in 1949.

He started off playing the cornet, a “small, more technical piece”. Throughout his journey, Alex has alternated between the cornet and the E-flat bass tuba.

Alex currently plays the E-flat bass for the Tauranga City Brass Brand. He has previously been both a bandsman and conductor for different brass bands in Taranaki and BOP.

“My parents weren’t that supportive but they went along with it, let’s put it that way. But I’ve always loved playing, and I still do.”

Alex returned to Taranaki in 2003 to teach music at Hawera High School and tutor and conduct the school’s brass band.

Another joy for Alex has been seeing young students he taught back in the day pursue careers in music.

“I see them at the very start of their journey, and now I see them doing what I was doing in my younger days. It’s quite nice that.”

“You know they’ve gotten in the army band or are doing music at varsity. Someone is head of music at Avondale College. They’ve all gone and bettered themselves.”

Alex doesn’t plan on doing too much celebrating for his 70-year achievement, aside from putting on a bit of supper at band practice.

“This one's been working away in the kitchen all day,” he says pointing to his wife Ann Garrett.

“Nobody else would do it, and I think it’s quite an achievement, to be honest. He says he doesn’t want any fuss but it’s acknowledging what he’s put into it,” she says proudly.