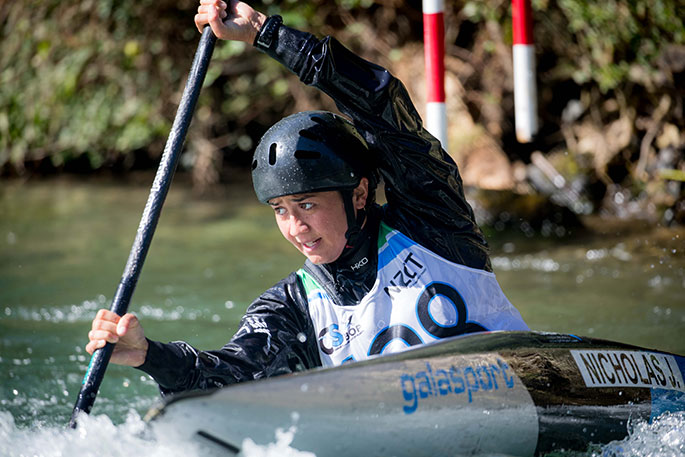 Tauranga's Jane Nicholas hopes to become the third member of her family to compete at the Olympics in canoe slalom. Photo by Jamie Troughton/Dscribe Media.

It was one of the toughest decisions she’s ever had to make but the glittering prize of an Olympic Games proved too hard to resist for Tauranga kayaker Jane Nicholas.

It certainly helped that the Cook Islands were prepared to move heaven and earth to convince her to don their colours for the Tokyo Olympic Games.

For the best part of a decade Nicholas has competed for New Zealand, where she was born and grew up and now works as a doctor in Tauranga.

She made her Cook Islands debut at last week's ICF World Cup round in London and will compete in the second round in Slovakia this weekend, alongside older sister Ella.

Ella and brother Bryden have already represented the Cook Islands, where their father Rob was born, and were rewarded with Olympic selection. Until this year, Jane had resisted.

Ella went to London in 2012 and Rio in 2016, and carried her country’s flag at the opening ceremony in Brazil. Older brother Bryden also competed in Rio, while Jane watched on as a spectator.

“It was very stressful, that’s for sure,” she says of the decision. “Being at the Olympics is an amazing experience, and of course it motivated me to want to get out and do it myself.”

It was super exciting to watch her siblings compete on the world stage, and now she wants a piece of the action.

“We were brought up as Cook Islanders, most of my family are in the islands, we go back every year – we culturally identify as islanders.

“I’ve been paddling for New Zealand for ten years and obviously there is only one spot for the Games. Luuka Jones, being that number one competitor and having won silver in Rio, put me in a difficult position about whether to pursue a place on the New Zealand team. 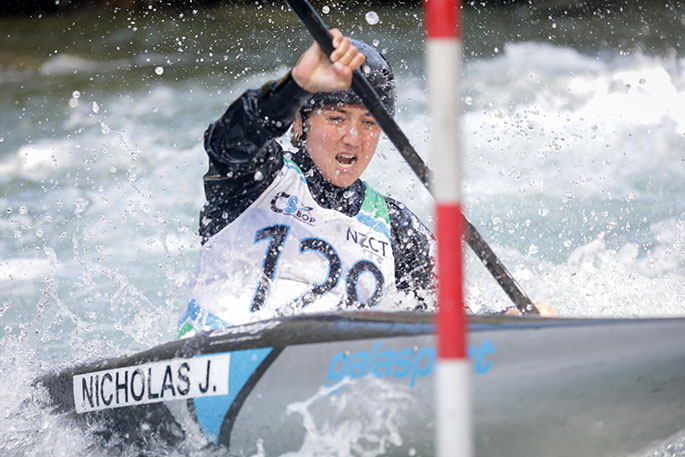 “The Cook Islands are hugely supportive of me. They want me to be part of their team and encouraged me to switch nations with some financial support, so it worked out very well for me.”

While switching from New Zealand to the Cook Islands allows her to avoid competition with Jones, it did potentially mean she would be competing against her older sister for an Olympic position. Nobody likes a family spat – but fortunately there won’t be one among the Nicholas sisters.

“My sister’s here, and she’s coming to the next two world cups but that’s in support of me,” Jane said.

“She’s not competing for the Games. I don’t have it in writing but the Cook Islands has said it will just support one of us, and that’s me.

“Ella is focusing on her own career - she wants to be a paediatric surgeon - and she’s reached the point in her career where she has to knuckle down in that job.”

Jane Nicholas also has a very successful life outside of canoeing, which also made her decision to focus on Olympic qualification difficult. Nicholas is also a full-time doctor, which makes training and competing a challenge.

But her career will still be there post-Tokyo. And she knows with the enthusiastic support of 17,000 Cook Islanders the Olympic experience will be a highlight of a lifetime.

“I’ve also got goals around that, wanting to become a surgeon, so it’s all a bit of a timeline,” she said.

“We’re definitely pretty well known in the Cook Islands. Everyone pretty much knows everyone anyway, but you get people coming up to you all the time, they put us in the paper and on the radio all the time, they are very proud of us.

“To compete at the Olympics, I really don’t have words to describe it, it would be amazing. I’d be so stoked, it would be an incredible opportunity.

“I’ve taken time off work now to train towards it in the hope I do qualify, and then I hope to do the Cook Islands proud and represent them well.”