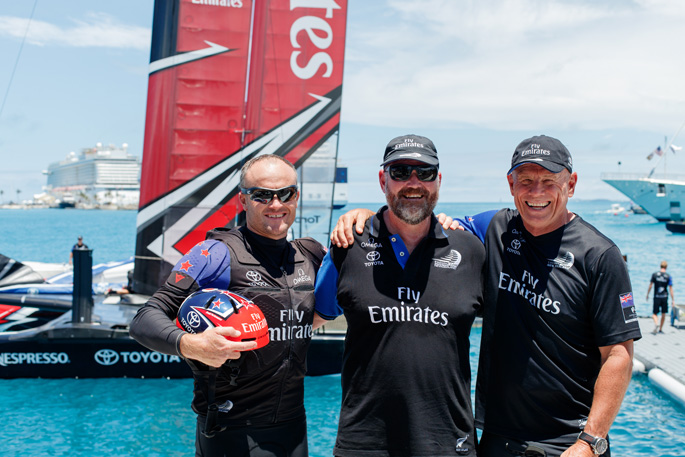 Motor Neurone Disease causes the muscles that enable us to move, speak, swallow and breathe to gradually stop working. New Zealand has the highest known rate of MND in the world, with an average of two people diagnosed each week and well over 300 people living with the condition.

Emirates Team New Zealand CEO Grant Dalton says Greg has been and continues to be an undeniable inspiration to the team while fighting MND.

“Whilst the disease is having a devastating effect on him physically he has always remained so strong and optimistic despite his personal hardship, he contributed to our success in winning the Cup in Bermuda, and he still manages to undertake his vital role towards the planning for the 36th America’s Cup in 2021.”

Greg is also a member of the national council of the not-for-profit charity MND New Zealand which supports people living with MND, their family and carers and health professionals to enable them to have the best quality of life possible.

Greg says MND New Zealand is a vital part of the support network for those with MND and their families.

MND New Zealand General Manager Carl Sunderland says it is a huge honour to be the Official Charity of Emirates Team New Zealand.

“We rely almost completely on the generosity of the New Zealand community to continue to provide free, personalised support to people living with MND, their carers and families and this partnership will help raise awareness of this devastating disease and the vital work we do.”

MND New Zealand also proudly funds vital research at the Centre for Brain Research at the University of Auckland and supports the latest genetics study led by Dr. Emma Scotter.

“MND New Zealand. Together with the Royal Society of NZ and several generous kiwi organisations and families, fund our research into the causes and possible cures of MND.

“Although the brain tissues of New Zealanders who die from MND show the expected signs of the disease, our research has uncovered a higher rate of MND in New Zealand than in the rest of the world.

“Our next step is a nationwide genetics study, also supported by MND New Zealand, to determine if our high rates relate to unique genetic factors in New Zealanders,” says Emma.

“Through Greg you can see the amazing work MND New Zealand do for the 300+ New Zealanders that are living with MND so we are really proud to be supporting them and everything they do” says Grant.

To make a donation to help MND New Zealand, please go to www.mnd.org.nz