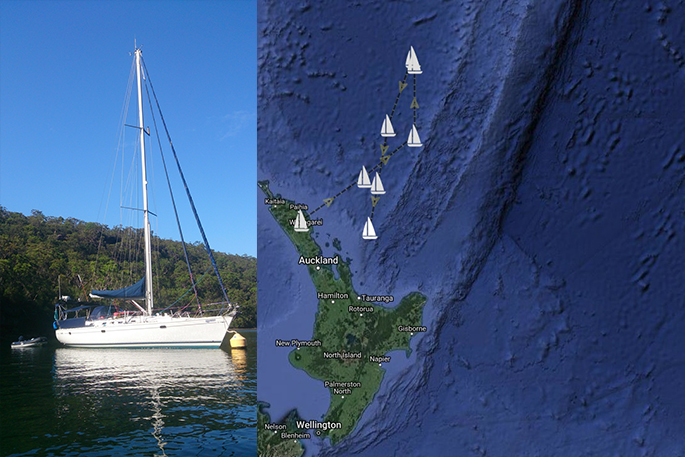 The Squander. Infographic/Yachts in transit.

Four sailors have been rescued from their life raft this afternoon having had to abandon their yacht 'the Squander' 90 kilometres East North East of Great Barrier Island.

Rescue Coordination Centre NZ - RCCNZ was monitoring the yacht's situation, having earlier received communication via satellite phone that the yacht had sustained rigging damage while trying to reach Tonga, and was returning to NZ.

At 9.30am on Sunday morning RCCNZ then received a distress alert from its Emergency Position Indicating Radio Beacon -EPIRB. The four crew had had to abandon their yacht into their life raft.

A Maersk container ship in the area was able to get near the stricken yachties but was unable to effect the rescue.

“This rescue highlights just how important it is to carry the appropriate emergency communications equipment,” says RCCNZ Manager Mike Hill. “If you can't make contact, no one will know you need to be rescued.

"Maritime NZ advises all boaties to carry at least two types of reliable emergency communications that will work when wet.

"This crew were well equipped for the specific journey they were undertaking and had a distress beacon, satellite phone, HF radio and VHF radio. As a result, they had the right communications device for their location and were able to let us quickly know when they needed RCCNZ's assistance.

"We also advise boaties to register their EPIRBs. Registration is free and can result in a more efficient search and rescue effort," says Mike.

The Squander is a 14.15m Jeanneau, Sun Odyssey, masthead cutter rigged sloop, white with blue trim. Manufactured in France 2003, the yacht has had two previous live-aboard owners who have sailed her extensively in English, French, Mediterranean, North African, Atlantic, and Pacific waters. She has also sailed the east coast of Australia from Sydney north to Darwin and returned. The current owners purchased the boat in 2012.

The crew reported at 2.18pm on Thursday that they had had a mast rig failure, had jury rigged three shrouds but were unable to continue under sail. The intention was to motor back to NZ. Emergency services had been notified and were monitoring the situation. The crew reported that all aboard were ‘as well as can be expected’.

On Friday at 8.18am the crew reported that the jury rig was holding and that they were managing to put up a small headsail, increasing their speed one to two knots. The crew were tired but in good spirits.

Friday night was tough going. The crew reported Saturday morning that they had had waves in the cockpit and couldn’t maintain course. It was a very rough night in 40 knots, and the crew said they were ‘hanging in there’ with limited control of the vessel.

By this morning, Sunday June 16, the crew found they couldn’t made headway to the west. The wind was a 25 knot south-westerly, with two metre sharp seas and rough squalls. The compromised jury rig could only sail on starboard tack and this was limited. The crew reported that their options were narrowing and that they would run out of diesel and could only sail to the east. This was the fourth day of battling headwinds and they knew their options were to have a commercial tow or initiate a distress call.

After abandoning the yacht, and being safely rescued from their life raft by two Auckland Westpac Rescue helicopters the crew are now back in Auckland.