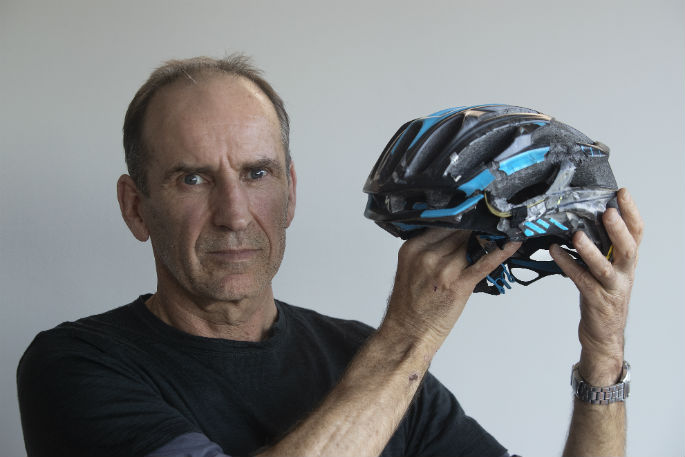 Gerard Eagar with his damaged helmet from the crash.

Local cyclist Gerard Eagar was knocked off his bike on Queen’s Birthday Weekend and he is urging the driver who hit him to use their “rage” energy to bring about positive change in the community.

“Possibly the person was trying to give us a bit of a fright but overcooked it. In retrospect, the person had to go out of their way to hit me, they had to make an effort.”

“Like I said in my letter, I challenge the driver to look at themselves and use their rage to do some good in our community.”

Gerard was knocked off his bike travelling down Oropi Road at around 10am on Monday, June 3. He was riding single file with two other cyclists, travelling at about 40 km per hour.

According to Gerard, all three cyclists were sharing the road, travelling on the left-hand side. The driver who hit him didn’t pull over after the incident occurred.

Gerard, who was travelling at the front, says initially the driver was about two cars back blaring his horn at the cyclists.

“The car then hit me and knocked me off. The next thing I remember is the noise of my helmet scraping down the road.”

Gerard reiterates how grateful he is for helmets, the head protection saving him from ‘significant injury’.

“Thank God I had a helmet on. I have got bruising all around one side of my head which was under the helmet, and the helmet is quite damaged from sliding along the road.”

Alongside a mangled helmet, Gerard sustained a large number of bruises and grazes, an extremely sore neck and shoulder and a gouge in his hip which has now become infected. He has only just returned to work this week.

“I haven’t been able to sleep very well and I can’t move very well when I wake up. The usual things when you get hurt. I am literally bruised, scraped and battered, but alive,” he says.

“Considering what happened I am fine. I haven’t broken my neck and I haven’t got a head injury.”

Gerard is deeply concerned that the driver who hit him may injure another cyclist, possibly resulting in a much worse outcome.

“It was totally unnecessary. Were they trying to put up a fight, or teach me a lesson? What was the point? No one will understand that apart from them.

“That’s the hardest thing, I don’t know how somebody would do that to someone else.

“There’s just one or two people like this, who really don’t like cyclists and are really vindictive.”

Gerard is extremely thankful to those who came to his aide after he was knocked off his bike.

“People who witnessed the event stopped to help and so did people driving past. They were fantastic.

“The ambulance staff were so personable and helpful. I couldn’t praise them enough about how kind and caring they were.”

Gerard says despite the accident making him more wary of road cycling, he doesn’t plan on getting off the bike anytime soon.

“I love going cycling, it’s an integral part of what I do and it keeps me fit and well, most of the time.”

He points out that he also regularly drives a car, paying tax on the road that he is using.

Western Bay of Plenty road policing coordinator Mark Pakes says cyclists are extremely vulnerable in crash situations and needed to be treated with respect on the road.

“We’re asking everybody on our roads to be considerate of each other and to be patient. Cyclists are human beings just like other motorists and therefore must be afforded the same degree of respect as every other road user.

“Motorists should ensure that they allow adequate room, at least 1.5m, when passing cyclists, and indicate clearly when they intend to stop or turn.”

Police say they are searching for a white or silver flat-bed ute believed to be involved, with a registration beginning with ‘NU’.

There are some very nasty people out there , who seem to delight in driving past cyclists at high speed and as close as possible. A couple of precautions I take are to use a good mirror, and pull of the road if I see a truck coming up behind me, and I use a cheap GO Pro type camera [ from the Warehouse ].At least then you have a better chance of identifying these idiots .If I have a close shave with a clearly marked commercial vehicle, I send a screenshot of the truck concerned to the firm, suggesting they re-educate the driver before he kills some one .

why the focus on the helmet

Firstly I wont disagree that the helmet probably prevented a serious head injury, but that should not be the focus of the article. This needs to be about the reckless endangerment of life. The police need to get serious about getting drivers like this off the roads. Even if caught the driver will likely get less than a 12 month ban, which is far short of a sufficient deterrent for behavior like this. Hope the bikes OK and glad to see your positive on the situation.