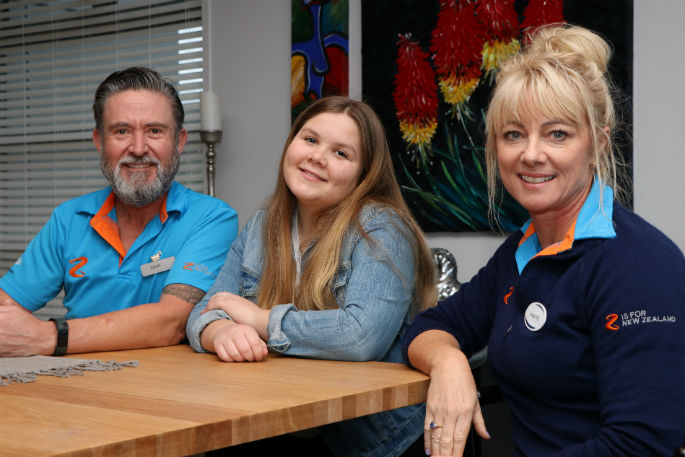 Amie Marchant, and mentors Lynette and Dave Gillies take time out to catch up.

Three years ago Amie Marchant wouldn't say 'boo' to a mouse. Now she is performing in school productions, giving speeches to hundreds of people and travelling overseas by herself.

The Otumoetai College student is one of the many young people in Tauranga who have taken part in national mentoring programme Project K.

“Before Project K I was one to keep to myself, and I never really spoke up. My teachers would get pissed off with me because I was so quiet.”

“Throughout Project K, I didn’t really see a change in myself, but looking back at it my confidence level has gone up so much,” says Amie.

She noticed a drastic increase in Amie’s confidence levels as Project K progressed.

“Amie was super shy and wasn’t confident in a lot of ways at the start of the programme. Over time she just transformed into this super confident, well rounded young women.”

In 2017, Amie received the Excellence Award for Project K in New Zealand. When receiving this award, she delivered a speech to dignitaries at Government House in Auckland.

“Before Project K I remember having big panic attacks before doing speeches. The fact I was able to speak about myself in front of hundreds of people at the Government House was really cool.”

“She just spoke so beautifully and confidently, and that was what nailed it for me to keep on with the mentoring work,” says Lynette.

Amie says it was just like having an adult best friend.

“She was always there for me and such a supportive influence. I would talk to her about everything going on in my life.”

“Speaking to her gave me the confidence to speak to other adults as well.”

Amie believes that Project K has mobilised her to do things she previously wouldn’t have been comfortable doing.

“I am performing in my school production at the moment, and I would have never done that three years ago. But I get up on stage now, and do my absolute best.

“I’m travelling to Germany in six weeks, and I will be flying on my own. I’m so ready to get out there. Thanks to Project K, I have full confidence in my ability to engage with the culture.”

Project K is a 14-month programme designed for Year 10 students. The aim of Project K is to arm rangatahi with a belief in their own ability to complete tasks and achieve goals.

He emphasises how rewarding it is to witness the growth and development of students as the year progresses.

Dave and Lynette both meet up with their students each week and keep in touch through technology in between time.

While some may think that is too much of a commitment, Dave says he doesn’t question the time spent.

“Why not do it if you can spare that bit of time, especially if you know you can make a difference.

In the past, Dave’s Project K commitments extended to dropping his student off at work at 5.30am which resulted in the young boy being able to buy his own computer and BMX bike.

Dave and Lynette both highlight the importance of leading by example, pointing out that it is the natural thing for them to do.

“We actually care, and we want to make a difference. It’s good that other people see us doing it, and it might encourage them to give mentoring a go in the future,” says Lynette.

Amie challenges all students selected for Project K to embrace the opportunity.

“Challenge yourself, but it will definitely make you a better person. It’s helped me so much.”