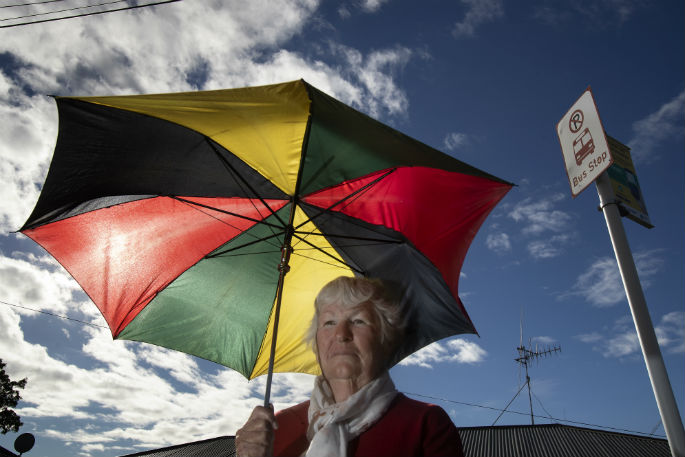 Kathy Fathers is “all wound up” and calling in a ten-year-old promise she says was made to her by the Tauranga City Council.

“It’s not too early,” says the peeved retiree of Pillans Point as she contemplates yet another winter standing in the rain at her local bus stop.

“I have been banging on about it, bugging the council with absolutely no joy.” What Kathy has been banging and bugging about is the lack of just one covered bus shelter within cooee of her Roderick Street home unit. After 32 years in the neighbourhood, she is fed up waiting in the rain for a bus.

“Especially when you are headed to the bus stop and the bus is disappearing round the corner and the timetable and the app are both telling you it’s not even due yet.” Kathy says you can be standing in the rain waiting for 20 minutes. “As I did the other day. I have even given up and walked home because I am so wet and suddenly your important business in town is unimportant.”

Anyhow, Kathy went to the Tauranga City Council ten or 12 years ago. “They told me they were getting some new shelters in and they promised me one. But when they arrived they were installed in Bethlehem and everywhere else.” She was miffed now, as well as cold and wet. “They promised but didn’t deliver.”

Kathy would appreciate a bus shelter at any one of three bus stops in proximity to her home. She doesn’t mind which - Goods or Milton Roads or outside Countdown in Bureta Road - just so she can drive her car to the bus stop and climb on the 72 which loops around Otumoetai before heading into town.

“Not worried about coming home because the heavens can dump on me and I will have a nice hot shower when I get home. But you don’t want to arrive in town with things to do and a wet hide.”

“Generally when we receive requests for shelters, we consult property owners for approval to place the shelter outside their residence.” If they don’t they look at sites when there is already approval.

But here’s the rub for Kathy. “There’s a bloody bus shelter sitting there rotting,” says Kathy. It’s the Vale Street shelter which was whipped out and placed behind a fenced encircling Mike Greer Homes’ proposed residential development next to Countdown. “Every time I walk past that shelter I get really pissed off. It’s been there for a year.” And the feisty 76-year-old says she will shut up and go away if that shelter was installed at any of her three nominated sites. “Lug it up the hill, set it in concrete and I will do the rest – I will find someone to wash it, sand it and paint it. I would get it done.”

In March, Kathy Fathers got an email saying sorry, the shelter was earmarked for another school bus. And that’s been confirmed by council. She was getting “pretty wound up” about council officers sitting in the warm and dry and not seeming to care about her being cold and wet at the bus stop.

“I am not being selfish, the bus shelter would be for a lot of people including schoolkids who have to wait under a tree in the rain for their bus.”

In response to further inquiries, Kathy says she was told no-one wanted a bus shelter outside their property. “I suggested tongue-in-cheek they re-route the 72 past my place and put the bus shelter there. I would look after it, grow some roses over it.” Then she took up the challenge and went door-to-door. “I found a guy whose property had a big front hedge. He wouldn’t have minded at all. They would have had to move the bus stop a few metres – not a big job.” But still nothing.

The TCC also has a contract with an Auckland company to install 10 shelters a year on arterial routes only as they require expose for their advertising panels. Any shelters made redundant from these sites are re-allocated.

But not the shelter in Vale Street it seems.

“The probably think I am a trouble-maker. I just want something done properly for the community. And no, I don’t want a seat at the bus stop. Because if we get a seat we won’t get a shelters. And a seat doesn’t help in the rain.”