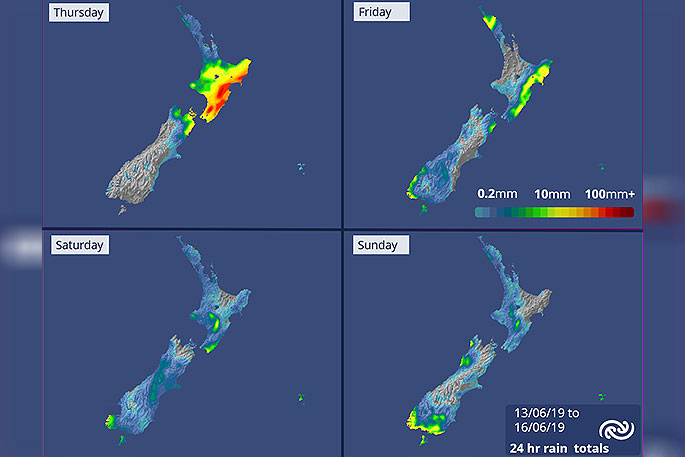 A cool southwest flow develops over much of the country during the weekend, with Saturday looking showery but improving on Sunday.

A low pressure centre and associated front crossed eastwards over the Bay of Plenty last night and went on to deliver significant amounts of rainfall to many eastern and southern parts of the North Island.

“Between 70 and 90mm of rain were recorded over the Gisborne and Hawke's Bay districts where a Severe Weather Watch for Heavy Rain was in force," says MetService meteorologist Andy Best.

"Looking ahead, the low centre is expected to move to the east of the North Island over the weekend then deepen close to the Chatham Islands on Sunday leaving a cool southwest flow over much of the country.”

For Friday, cloudy periods for most in the North Island, but periods of rain in the east, gradually easing and just a few showers about Northland. Partly cloudy conditions over the South Island, but rain spreading up the west coast as far as the Glaciers, with a few spots reaching east about Otago and southwards.

Looking to Saturday, most North Island places see showery conditions in a cool southwest flow, but the showers should ease over western areas later in the day and the Bay of Plenty should remain fine.

Areas of early rain over the South Island are expected to clear, leaving a fine day for most places. However, a few showers develop later in the far south on an approaching front.

A definite improving trend as we move into Sunday. The country remains under the influence of the cool southwest flow delivering a few showers to Northland,

Auckland, Taranaki, Taihape and Buller. However, apart from occasional showers over the far south of the South Island, the remainder of Aotearoa will have a mainly fine day.