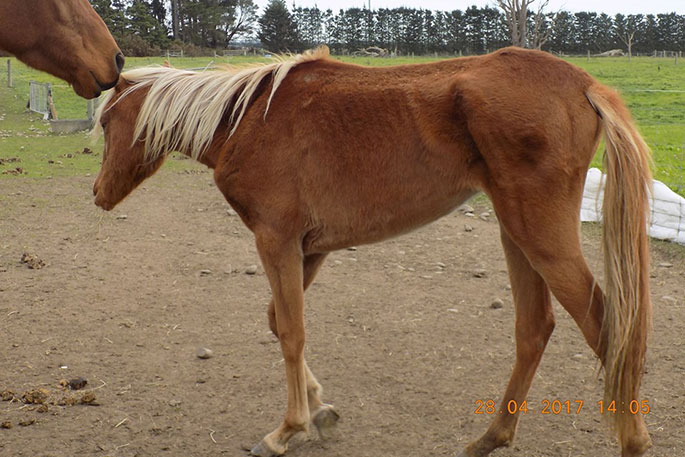 The horse before, above, and now, below.

A man has been prosecuted by SPCA for ill-treating his horse after he failed to provide her with proper and sufficient food and adequate shelter.

The case began on 28th April 2017 when SPCA Inspectors were alerted to a concern about a number of horses on a grazing block that belonged to the defendant.

The horses, that ranged in body condition, were contained in paddocks that had no grazeable pasture and heavy faecal contamination.

One horse, a chestnut filly, was emaciated; with a body condition score of 0/5 (2.5 would be considered ideal). Supplementary feed was present on the property, and one bale of baleage was open but out of reach of the chestnut filly.

Due to the immediate concern for some of the horses a veterinarian was called to assess them, and baleage was fed out to the thinnest horses.

Veterinarian examination revealed the chestnut filly was severely emaciated, was suffering from locking stifles as a result of low muscle mass and was considered to be at substantial risk of dying. The reduction of body condition would have taken many weeks and she would have had prolonged mental and physical suffering as well as chronic distress. The vet concluded that her poor body condition was a lack of proper and sufficient food.

Under SPCA’s care, the chestnut filly flourished and gained weight, her stifles were no longer locking, and by September she had reached a body condition score 2/5, after being provided with a basic diet of rough pasture, ad-lib hay and 1kg further supplementary feed each day. She then went out to an SPCA foster family who fell in love and subsequently adopted her. 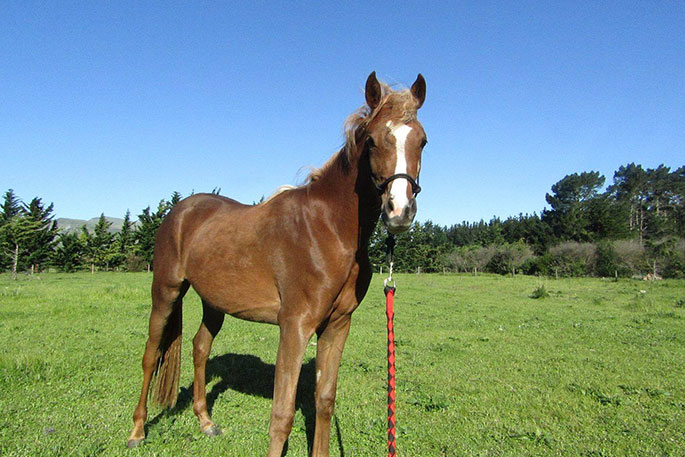 “SPCA commonly deal with horse welfare complaints. Looking after a horse or pony is a big responsibility as they have complex needs and require a lot of time, hard work, and money to ensure they stay happy and healthy. They require more than just a paddock to thrive. The defendant failed to provide even this, resulting in the starvation of his horses,” says Andrea Midgen, SPCA CEO.

“Horses can live well into their thirties, so it is important that owners have a thorough understanding of their ideal diet, environment, behaviour, and health care needs before getting a horse.”

Why hasn’t this excuse for a human being been named and shamed?