Campbell moves up the standings at Canterbury 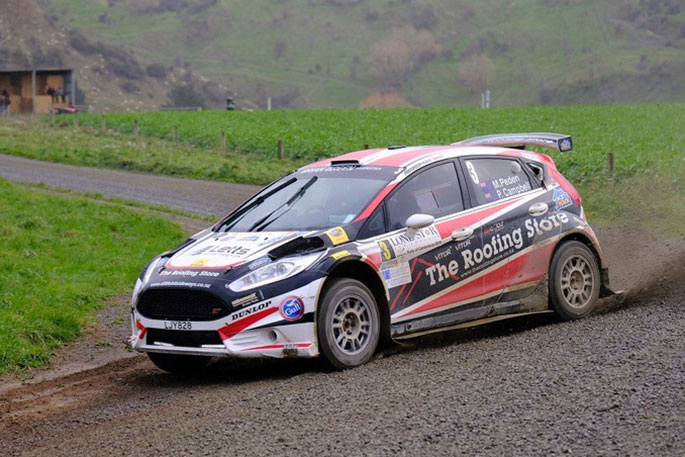 Tauranga’s Phil Campbell has moved up to third in the Brian Green Property Group New Zealand Rally Championship after the third round, the Lone Star Rally Canterbury, held over Queens Birthday weekend.

Campbell started the season with a podium finish and looked to be in the hunt to challenge for the lead of the championship across the season, but an unfortunate mechanical failure at round two saw him slip back to eighth.

Seeded third for the Christchurch-based event, Campbell made a solid start to the event, setting a pair of fifth fastest stage times on the opening two stages, before a third fastest time on stage three saw him move into fourth place.

He and co-driver Mal Peden continued to push on including powering The Roofing Store Ford Fiesta AP4 to the second fastest time in stage five, a time that put them within eight seconds of a podium finish with two stages remaining.

With more than a sniff of a podium, Campbell pushed hard in the penultimate stage, but an unfortunate spin saw him lose 30 seconds and with just one stage remaining, he was forced to settle for fourth place.

“I’m really happy with how we went at Canterbury, every time we get into this car it seems to just go better and the pace is getting faster which is really encouraging,” says Campbell. “We were trying pretty hard towards the end there, unfortunately we had a spin but that’s the risk you take. I’m pretty happy though to be back in the championship top three.”

Campbell and his team now head to the fourth round of the championship, the Stadium Finance South Canterbury Rally, on June 22.