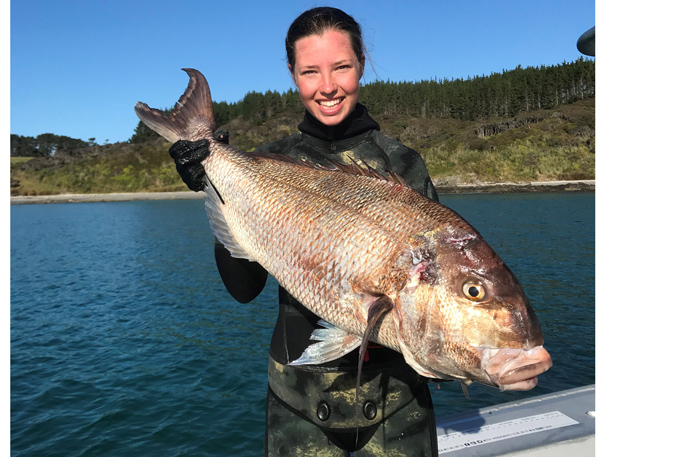 Alex with a 10.5kg snapper shot on the snoop in the far north.

Alex Edwards probably is pretty much your  typical Kiwi teenager.

Except she’s a kiwi teenager who spends large parts of an average day 15 metres or more underwater, holding her breath for up to two and a half minutes, taking potshots at passing fishlife.

And representing her country while she does it.

Alex never dreamed her passion for spearfishing - nurtured by her parents making snorkelling a favourite part of her childhood, and then finally, at about the age of 12 she thinks, trusting her with a speargun - would turn her into not only a national sporting representative, but surely one of the country’s youngest ever, in any sport.

“Definitely not, I’d never really thought of it.” But after early success in national competitions she realised it was something she very much aspired to.

“So I put my mind to it and worked really hard, just diving all the time. And asking people lots of pestering questions about how they got fish and stuff like that - trying to learn as much as I could.”

National recognition was not long in coming, with a place in the winning New Zealand women’s team at the 2016 Inter-Pacific champs, held in her home waters of the Bay of Islands.

“I started competing for New Zealand when I was 14. I think I was the youngest to make the team, or youngest to win the Inter-Pacifics, because our team won it that year. Which was pretty cool as a young kid.”

Already Alex’s spearfishing addiction has taken her to an assortment of global destinations, including Missouri, Guam, Hawaii, and to Victoria’s Port Fairy for the Australian Spearfishing Champs in March, where she cleaned up with the women’s and junior titles.  Then it was Eden on New South Wales’ southern coast in early May for this year’s Inter-Pacifics, where the kiwis gave the home team a good run for their money.

Big plans are in place for next year too, with a goal to try her luck in Mediterranean waters off the coast of Italy at the 32nd World Spearfishing Champs.

“Last year was the first year they let females compete in the World Saltwater titles. So I’m trying to make the team to head over there to Sardinia for next year.”

In a traditionally male dominated sport, Alex is doing what she can to raise its profile for women.

“Females haven’t really pushed themselves as hard to compete at that level because it’s fairly new to us but I’m trying to let people know that girls can compete just as well as men can.

“Now quite a few females are getting into it, which is really cool to see.”

In March Alex and partner Gemma Shields achieved a noteworthy tenth place at the World Freshwater Champs in Taupo. It’s just one of many cool locations she’s fished in her home country, from the very top of the North Island and Three Kings Islands to Fiordland.

Bay of Plenty’s welcoming waters are next on the to-do list for some serious exploration this year, she says.  It’s a gap year for her after graduating from Kerikeri High School, before heading into serious study - probably something to do with aquaculture at Otago University - next year, so there’s a lot of travel, spearfishing, and adventure to be packed into it.

So what is it about the sport of spearfishing that’s got Alex hooked?

“I guess it’s the fact that it’s quite a challenge, a personal challenge, and it’s a freedom.  You’re venturing into a place that’s mostly untouched by a lot of people and you get to explore pretty much a new world.

“The adventure part of it is probably my favourite - exploring new places.

As a competitor who’s already brought home prestigious titles in the sport Alex is clear on the skills needed to succeed.

“Knowing where they’re hiding and getting to understand how different fish react and where they live.”

Blending into the environment and making yourself as inconspicuous as possible are crucial skills too.

“You’ve got to be really quiet, stay really still with a lot of fish and make yourself look interesting for them so they come and see you but also not scare them away.

“You just have to look really chill and relaxed.”

Training for Alex generally involves more diving. “I’ll be diving quite a few hours most weeks, trying to get on top of the game.”

And it’s not always about shooting anything. Often she gets more of a buzz out just finding fish and observing them.

Then there’s also the other creatures she gets to hang out with beneath the waves that make it special.

“I’ve had some pretty cool swims with sharks.

“When they’re really friendly, that’s probably the highlight of my sport so far.

If there’s any fear, she says, the feeling is often mutual.

“In the water they’re usually really chill. They’re quite fascinated but they’re also quite terrified of you.

“I’ve never had a shark be so overly aggressive with me that I’ve had to get out of the water. They may steal your catches a few times but you kind of get over that ‘cos it’s their world you’re playing in.

“I’m not going to argue with them.”

One of the prime reasons we have this issue, is quite obvious. People take the breeding fish... call it bravado, ego whatever you wish. The fact is, this has to stop.