Respite from a tumultuous start to winter 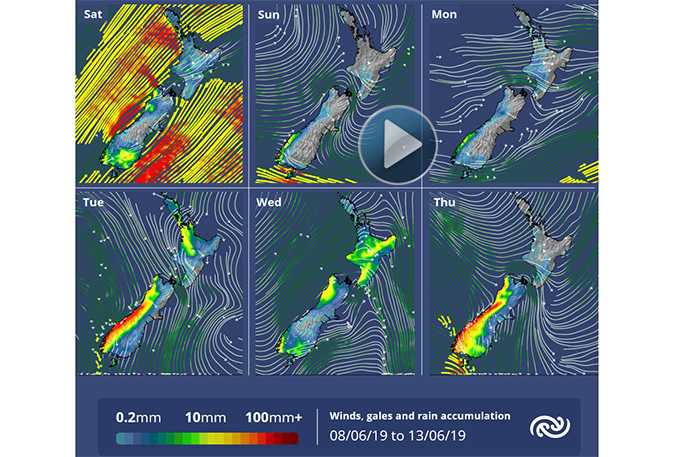 Video showing ice at The Lakes by Emerson Balk

Winter may have opened with a tumultuous week of weather, but the coming seven days offer a brief respite.

Since last Monday most main-centres have seen their coldest night of the year with Twizel holding the dubious honour of the coldest, plummeting to -7.6C on Wednesday night.

Heavy rain, gales, snowfall and large swells have completed the wintery picture. The week ahead looks unlikely to pack as many punches.

“Winter put it all out there last week,” says MetService meteorologist Tom Adams. “Next week is looking much more benign in comparison.”

“A deep low moved over the country on Wednesday,” says Tom, “bringing strong northerly winds ahead of it, and southerly gales behind. Strong winds associated with thunderstorms damaged several houses in Northland, and then the subsequent polar airflow led to the cold temperatures we experienced over the last few days.

“The southerlies built up a sizable swell too, with waves up to 10 metres high recorded off Taranaki on Saturday. The strong winds also cancelled flights, felled trees and cut power to parts of Auckland.”

Today the winds turn back around to the west allowing warmer air to move on to the country, also meaning an increase in cloudiness. A brief front crosses New Zealand mid-week bringing a period of rain, especially to western regions. The longer-range models hint that colder, more typical winter temperatures return the following week.

The image above is showing gales, coloured yellow and red, easing over the coming days as the winds swing around to the westerly quarter. However, this does mean more rain in the west.