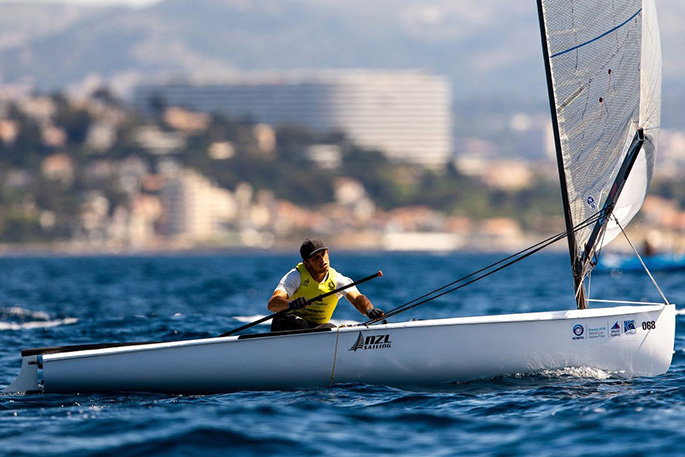 There's only a small contingent of New Zealand sailors at the World Cup Series Final in Marseille but they will leave with two medals after the Finn pair of Andy Maloney and Josh Junior guaranteed themselves a top-three position heading into the final day.

Josh can't realistically be bumped off the podium given he is 19 points ahead of Turkey's Alican Kaynar in fourth.

The medals will be just reward for an impressive week of sailing from New Zealand's top Finn sailors who have won eight of the 10 races between them.

Andy, however, was thankful to have a good drop up his sleeve on the penultimate day after a fifth and a seventh in the first two races of the day. He rebounded to win the last race in variable 8-10 knots conditions.

Josh had actually closed up the gap between the two after a second and a first to be level on points with Andy but was ninth in the last race to fall behind. He was forced to count that result given his drop for his worst result was already a 13th from a start line disqualification earlier in the regatta.

"It was the type of day I was fortunate to have a good drop up my sleeve, which was really handy because I was really struggling in the first couple of races to get anything right," says Andy. "JJ sailed really well in the first couple of races but I managed to win the last one so I was happy to finish the day off on a high note and maintain the lead going into the medal race tomorrow.

"Both of us have little gaps behind us but it's not much in a medal race. I will definitely be keeping an eye on where Josh and Max are throughout the race and I'm sure they will be doing the same.

"I'm really just looking to have a clean race and will try to win and the rest will play out from there. There will come a point in the race where you will have to assess how the others are going and what you need to do to seal the deal."

Andy and Josh will look back favourably on this week as they continue their good form of 2019 but it won't be the case for Gemma Jones and Jason Saunders.

The Nacra 17 pair didn't target this regatta as a peak event but were left more frustrated by the way they sailed than their ninth placing overall. They were ninth in today's medal race to round out a regatta won by Italy's Vittorio Bissaro and Maelle Frascari.

"The regatta didn't really go to plan for us but we were just trying some things out and trying to get our speed sorted," says Gemma. "We definitely crossed off a few things we don't want to try again but it's all part of learning.

"Now we will have a break, have a reset and try to figure it all out before we head to Japan for our next event."

Results and standings after day 5 of the Hempel World Cup Series Final in Marseille: