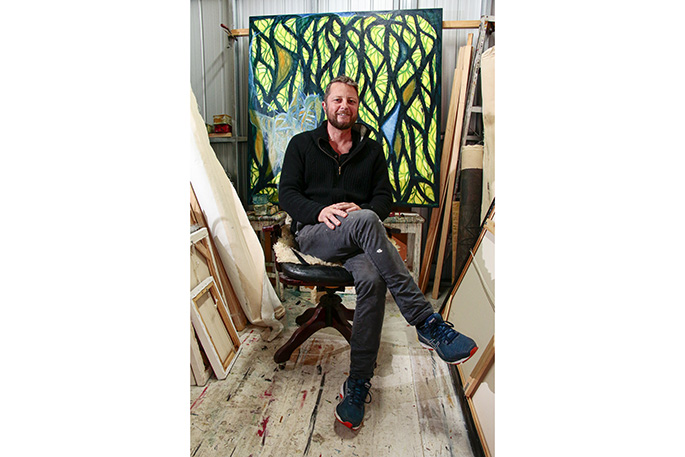 “Concussion is a weird thing and I wouldn’t wish it on anyone,” says painter Kristian Lomath.

Bruce Barnard and I were standing at the door of Kristian’s new studio, marvelling at the canvases and colour.

Having experienced severe concussion myself, I know it can take months to recover from head injuries. Kristian was assaulted in Greerton in April but has no memory of it happening. On leaving hospital with a plaster over the cut above his left eye, he still felt a little shaky but also very lucky. He headed back to his studio as soon as he could, to continue discovering where his new direction in painting was taking him.

“I think the change was happening anyway, and if anything the assault slowed me down quite a lot in terms of work effort and in terms of being at the studio every day.

“It knocked the stuffing out of me, knocked me for a six. The concussion made me stop and rest. It’s a change from the last few years of painting all the time, and now I’m finding that balance which is helping the work quite a lot more.” 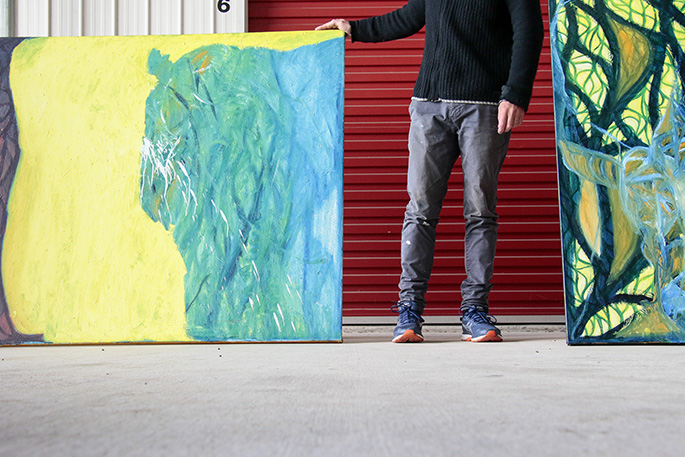 He enjoys showing us recent canvases, pulling them out into a covered area at the storage lock up where he works. The new direction is quickly apparent.

Expanding from his usual limited palette, he’s traversing a new frontier of emerging ideas and feelings. There’s still the shapes and colour palette for which he is well-known, but new experiences and thoughts are pushing their way through.

His large oil-on-canvas works have always drawn me in and held me in moments of thought. 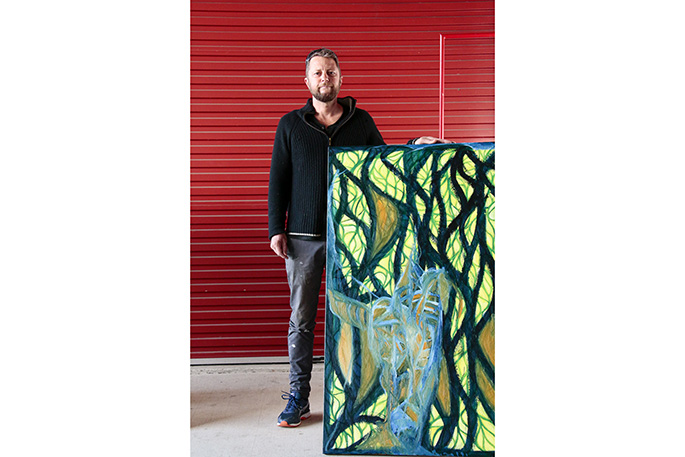 Sometimes I have found them comforting, as I lose myself in the patterns, but then I’ve stood in front of other paintings with seemingly no pattern, just random shapes, and I find my mind is busy on its own, sorting and reassembling.

I’ve been struck by how Kristian’s sometimes captured my own sense of disquiet at how futile and difficult life can appear to be; and the isolation I’ve experienced when I’ve felt lost, or invisible.

But then as I absorb the paintings and let them unwind me, I find the shapes are no longer trapping me, but their gentle flow is letting me go, easing my scattered, busy brain. His journey in paint becomes my journey.

Where I see sinews and a microscopic view of nerve endings, others see leaves, faces and landscapes. I know Kristian has in the past fought the black dog of depression, but his paintings always give me the sense that if I go on with life, that there will be something to lift me up.

At his last exhibition I soaked in his lemony yellows. Like a delicate butterfly of hope caught on canvas, that colour was uplifting, softly joyous and life-giving.

Kristian had told me then that he thought anyone looking at his works would find some environment that they are reminded of, something that we all see in our daily lives.

I love, that when I return to his work, it creates questions in my mind. But once where it engaged my feelings with a sense of disquiet, now there is joy emerging, and a sense of rest too.

Now, post-assault, the butterfly has taken flight, with new landscapes, patterns and colours starting to burst forth from the brush. 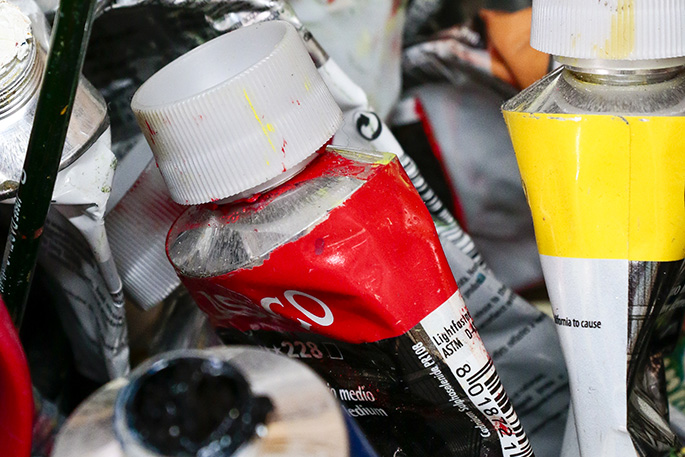 “It’s highly intuitive,” says Kristian. “It’s pushing paint around, and letting paint do the work. Every day is an experiment with the work.

“Being assaulted is horrible, and it’s best not being able to remember it. But I’m always going to paint. I’m obviously painting through it. People have noticed the change in my style which is really cool.”

He’s been looking for a new approach to his work.

“It’s nice when it shows up and people respond to it. As artists we can be our own worst enemies. If you’re not having people coming and seeing your work, you can be quite negative towards it and quite single-minded. That’s why we have shows.”

I’d already found his paintings hanging in Macandmor Art Gallery and High St Boutique in downtown Tauranga, standing in front of them for long periods.

“Lynette Fisher gave me my first solo show in Tauranga about 2013,” says Kristian. “I was running a community gallery in Rotorua at the time. She made some really good sales for me and that encouraged me to come over to live in Tauranga.”

In Rotorua, he had the luxury of being able to paint large canvases in an industrial building. Six years on, he’s decided to go smaller, and rents a small storage unit to work in.

“I need to paint in a way that connects with other people. They can buy this, it’s not expensive and they live with it in their house for the rest of their lives,” says Kristian, pointing at his work.

“I love the connections I make when someone does purchase a work or when you give it away. It obviously means something to them and that makes me carry on doing what I do.” 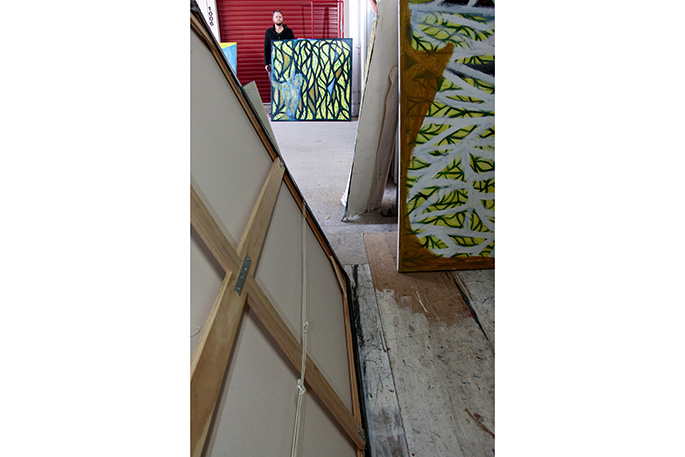 Wonderful work Kristian! Sorry to hear about that cowardly attack. Wishing you all the best for the future!