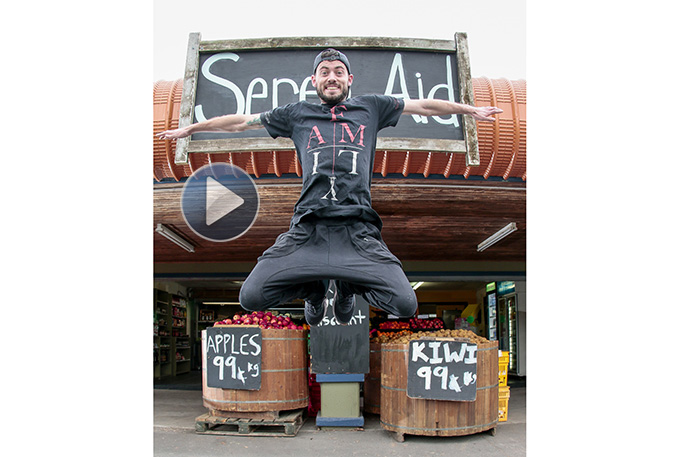 I slipped into a seat at Curate Church one evening and turned to say ‘hi’ to the person next to me. A great surprise to find it was none other than “Knightrider” Nathan W. Little, one of my most favourite-in-the-world human beings.

I hadn’t seen him in months.

“Where have you been?” I asked as we hugged and greeted each other. “I thought you were overseas?”

“We’re back!” he grinned. Since I’d last seen him, he’d married the lovely Alyssha and they’d embarked on overseas travels, looking for ways to help support orphanages and areas of need. He was back and working as a greengrocer at Seren-Aid.

“Where is that? What is it?” I asked as the Curate band started playing.

I first met Nathan in February 2015, when he was quietly getting on with doing his job on the Z Palm Beach forecourt.

It was a dark and stormy night, and my sister had phoned me from Canterbury to say there was a mother with two children from Auckland stranded in the storm looking for somewhere to pitch their tent in Papamoa.

They’d been up to the Papamoa Beach Resort, but in the high winds and darkness seem to have missed locating the after-hours phone, so they headed to Z where they poured out their tale to Nathan. He helped them phone the local backpackers but they were full, so they’d phoned my sister to see if she knew anyone with a back yard they could set their tent up in. We were heading into some wild weather, so I phoned Bex Crosby, manager of Papamoa Beach Resort, she rang her camp security person, who then met the mother near the entrance and took them to a cabin for the night.

During this time Nathan was not only friendly, helpful and supportive but had also offered to provide overnight accommodation as soon as his shift was finished. 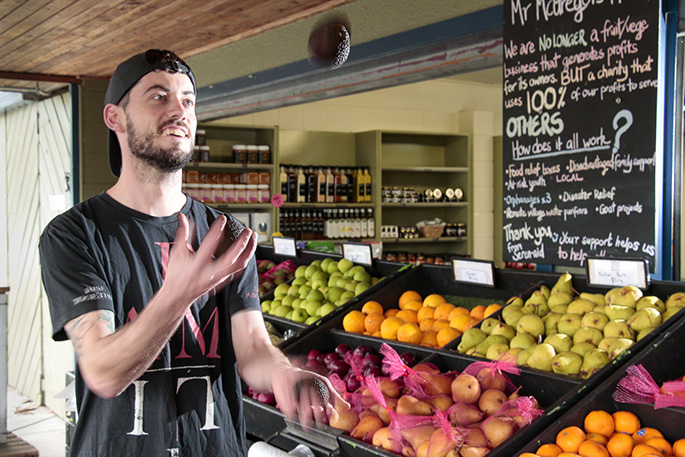 Soon afterwards I decided to go meet this ‘Knightrider’, as he seemed to epitomize the friendly heart of the Papamoa community. We posted his photo on the Papamoa New Zealand Facebook page to inspire others and were flooded with incoming messages.

I met Nathan again in November 2015, when he draped himself in a French flag and staged a 48-hour sit-in fundraiser at Z Palm Beach from 7am Friday to 7am Sunday to help raise funds for the French Red Cross following the tragic loss of life in Paris.

The following year in July 2016, I called in to buy petrol, only to discover that Z Palm Beach had won top Z in the country, and Nathan’s boss awarded the top boss award.

In 2016, I pulled into Z Central Parade at the Mount and found my favourite ‘hello’ person Knightrider now managing the new-look place, serving up frozen yoghurts. We posted an update on where he was so all the people inspired by his friendly nature could find him again. 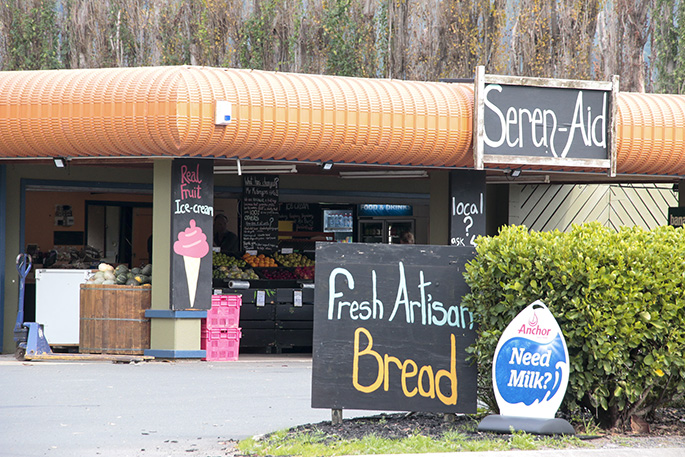 I went out to Te Puna to find Seren-Aid, only to discover it’s the new business in the previously-named iconic Mr McGregors Fruitshop.

Mark and Michelle McCafferty and Alvin and Helen Allen have joined forces to run Seren-Aid, the first greengrocers in Tauranga to be a not-for-profit social enterprise. 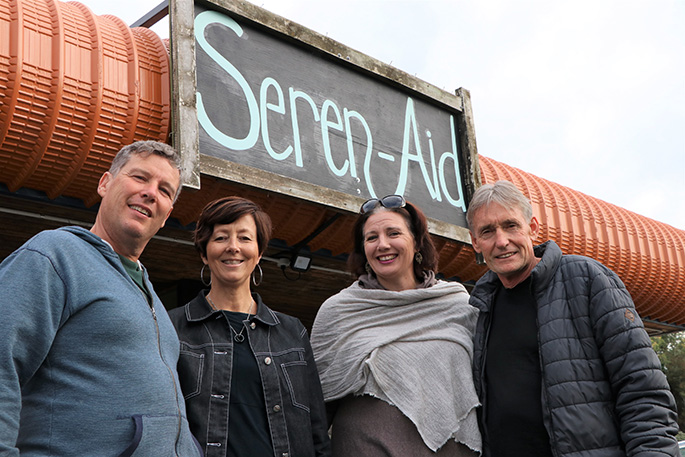 Mark and Michelle McCafferty, and Alvin and Helen Allen

“Michelle and I owned Mr McGregors for seven years,” says Mark. “We decided a year ago we’d like to do something for the community. Alvin and Helen Allan, our friends in Te Puna, joined us about nine months ago and we decided to run this as a fundraiser for the community.”

Seren-Aid is run as a business, with all the profits made going towards two projects the couples run – ‘Others’ and ‘Beyond’. 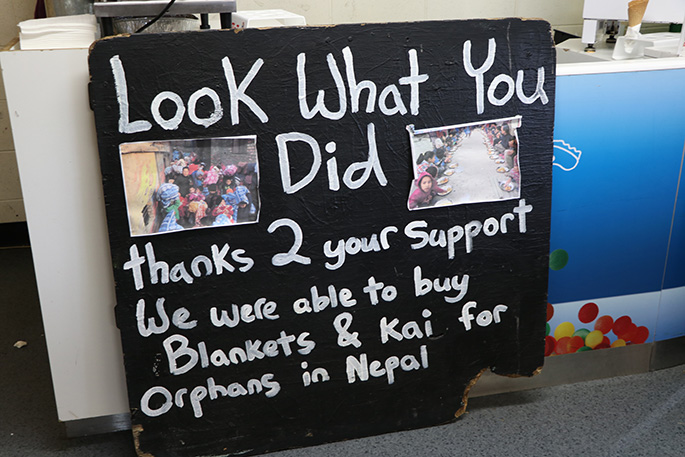 ‘Others’ focuses on local needs amongst the homeless, for example helping support a shelter in Ohauiti. ‘Beyond’ is for international projects the couples have been working on in Asian countries, helping fund three orphanages, water purification and community development projects, girls' homes and goat programmes. 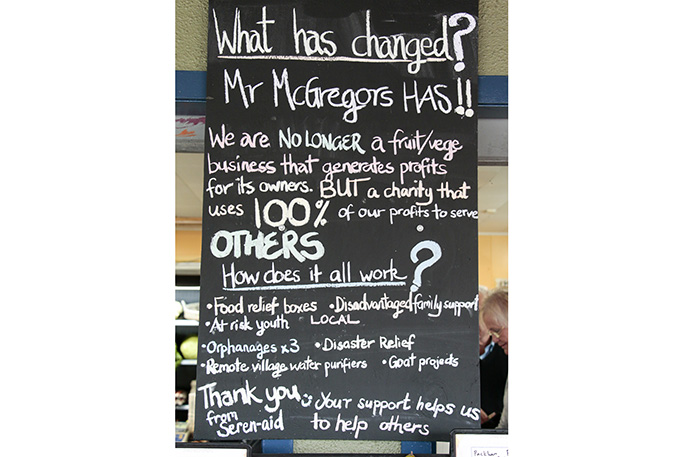 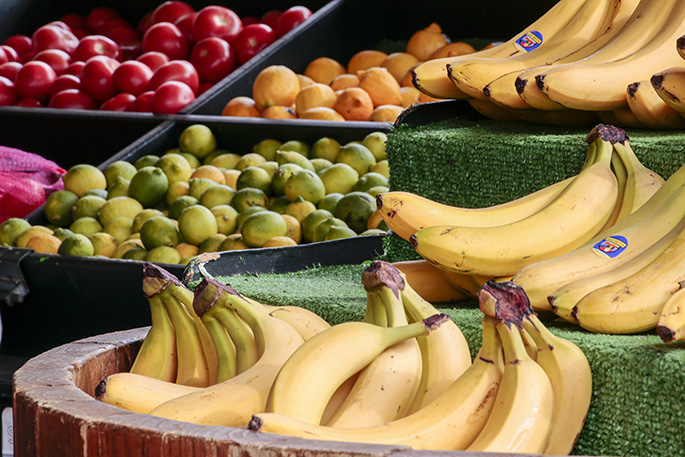 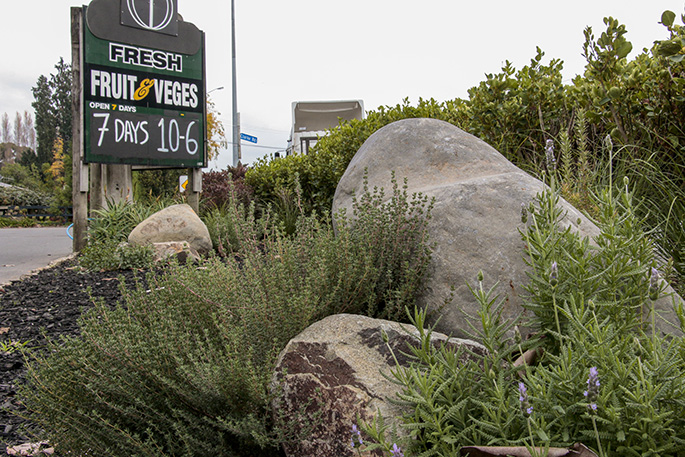 “We have free herbs in the garden that people can help themselves to - mint, rosemary, sage, thyme,” says Nathan. “And we have real fruit icecream, drinks, freshly baked bread every morning from Blomquist Bakery in Greerton.”

“If you take ingredients like generosity, kindness and love for people, then it can change a whole community,” says Mark. “That’s what we’re trying to do. We’re trying to do something positive rather than just running a shop and making money. 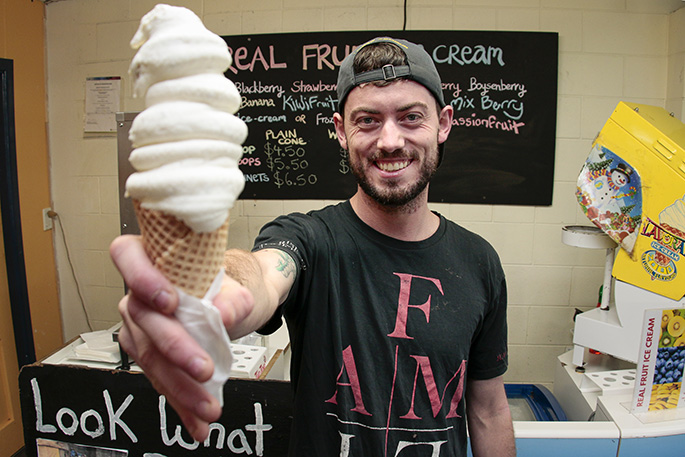 ...but I wish your good works/money would go to Kiwis in need first. SO MANY really really struggling Kiwis out there with rents so disgraceful and nothing left for decent food etc. Charity begins at home in my opinion. If every nation looked after it’s only poor and needy first it would make a huge impact. :)