NZ pair having a Finn time at World Cup Final 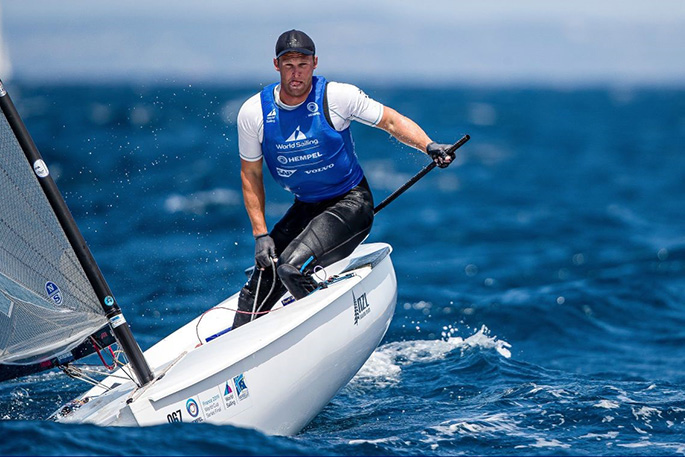 They've been there all week and Andy Maloney and Josh Junior don't look like loosening their grip on proceedings at the front of the Finn fleet at the World Cup Series Final.

Andy picked up another race win in one of the two races today, his third of the regatta, and the Kiwi pair have now won six of the seven races in the Finn fleet.

He also added a fourth - his discard for his worst result-  and holds a six-point lead over Josh heading into the final day of fleet racing before Sunday night's - NZ time- top ten medal race.

Gemma Jones and Jason Saunders are ninth heading into tonight's Nacra 17 medal race and are aiming to finish a frustrating regatta on a high.

Competitors across all of the ten Olympic classes, as well as the kiteboarders, once again had to contend with fresh breezes and a sizable chop. Race management sent the fleets out early with the expectation the breeze would build and most classes got in a couple of races before gusts of 30 knots were recorded and the sailors were sent back to shore.

There was enough time for two races in the Finn and Andy and Josh consolidated their position at the front of the fleet. Although neither won the first race of the day, the first time this week someone other than a New Zealander has crossed first, Josh admits a battle is developing between the good friends and training partners.

"Me and Andy are both sailing really well and we are starting to put a bit of pressure on each other," says Josh. "It's all friendly out there but we're certainly not giving each other a lot of space and keeping it pretty tight.

"We are just trying our best to be near the front and certainly the racing between us is pretty tight, and pretty tight with everyone else. It's been a really good fleet and we are really enjoying the battles.

"We both had one good race and one average race and that keeps us right at the front so, for us, it was another good day. It's nice to be at the front of the fleet leading into the business end of the regatta."

It's where Gemma and Jason would prefer to be in the Nacra 17 fleet, even though this is not a peak event for the pair. They were seventh in the first race today but capsized at the top mark in the second race and eventually finished 12th.

"Heading into tomorrow we have another good chance to get some medal-race practice," says Jason. "We will try to win the last race and hopefully gain a couple of spots.

"It's been a tough week for us. We have been lacking a little bit of boat speed and haven't done enough sailing lately in strong winds so I'm sure that will be something for us to work on.

"Usually we are quite good at it but we are a little bit out of practice and need to get a little bit quicker. Hopefully we can do that over the next couple of months and then bounce back a bit because we want to be fighting for the podium, not just for the medal races."

Results and standings after day four of the Hempel World Cup Series Final in Marseille: