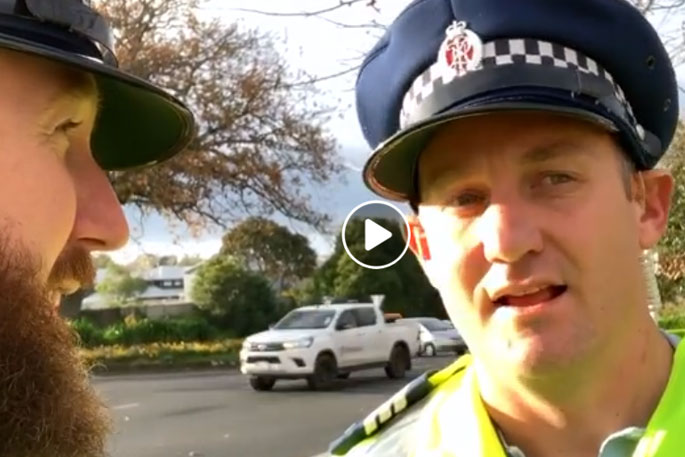 Lack of indication is the one thing two police officers noticed when filming a video at a roundabout in the Waikato.

Constable Jack Driver and Sergeant Todd Hubbard, from the Strategic Traffic Unit in Hamilton, are recording a series of videos aimed to raise awareness of driving on roundabouts and the best practices drivers need to use.

In a video posted to Facebook today, Jack and Todd visited a number of different roundabouts around Hamilton and explained what people should be doing when entering and exiting the roundabouts.

“The message from the sarg today, is patience,” says Jack.

“Every time you exit a roundabout, you need to indicate.”
Todd says drivers who fail to indicate can be fined.

Watch the video above for more advice from the officers on driving around roundabouts.

I thought we were learned to drive before we go up for the driving test. Also that we knew the road code.

Good on the cops for making these videos, i hope they get plenty of publicity. The reason 2 lane roundabouts don’t flow freely is that drivers won’t indicate when they are leaving the roundabout so others can enter or worse indicate right then turn left. Other drivers become wary of the lies that they indicate and hesitate to move ahead. I can double indicate and change gears at the same time in a manual gearbox car going around a roundabout, it must be so easy in an auto. In Rotorua they have started putting up signs that say "Leaving the roundabout? Indicate LEFT" and a picture of a car with left indicator flashing. Tauranga needs these on every roundabout until drivers get the message. Want to streamline the flow at intersections and get home quicker? Then indicate truthfully where you are going...

Same if you walk down the street, they won’t share the path and break rank. Just barge on through. No manners.

Where there is two lanes entering a traffic island and its arrowed for left and straight ahead and the right lane is arrowed for going right there should be no need to signal.Most of the island around Tauranga are so small you dont get time to take your hand off the wheel during a turn to change the indicator.In Canada they have compolsory stops at every street entering the intersection,it works perfectly safely.Of cause that wouldnt work here because the drivers here dont respect the other driver rights who arrives at the stop line first to make it work