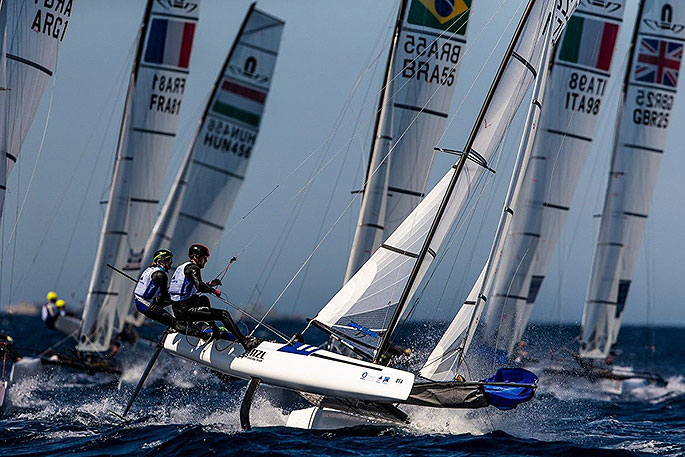 It was a case of survival for most who raced on the second day at the Hempel World Cup Series Final in Marseille, with capsizes and gear breakages a common theme.

Gusts well in excess of 30 knots were recorded across the five courses which meant some sailors were thankful to be kept on shore, but some classes got some racing in before it was deemed too unsafe.

In the 49er fleet only four of the 14 boats finished their only race and the 49erFX race was abandoned due to the carnage unfolding.

The Finn class didn't get any racing in, meaning New Zealand's Andy Maloney still leads and Josh Junior is second and they will look to catch up to the schedule in subsequent days.

Racing for the Nacra 17 fleet got under way in 17 knots but the wind quickly built. They still managed to get in two races before it got too dangerous and Gemma Jones and Jason Saunders recorded a fourth and an eighth to remain in ninth overall.

"It was pretty fresh today," says Jones. "We haven't had that much wind racing in a long time and it was actually kind of fun.

"In the first race it was just starting to really build and at the end it was full-on survival mode. Everyone was caught out with their settings not quite at that wind range.

"In the next race it got windier but people were more set up. It was just so windy and choppy everyone was capsizing and masts were breaking. We capsized on the last run, which was unfortunate, but I don't think we actually lost that many places because everyone was capsizing. It was one of those days."

A strong Nacra 17 fleet has assembled in Marseille, with Italy’s Vittorio Bissaro and Maelle Frascari holding a one-point lead over France's Billy Besson and Marie Riou and John Gimson and Anna Burnet from Great Britain in third.

Jones and Saunders will aim to work their way up the standings but have their sights on regattas later in the year as they intensify their preparations for next year's Tokyo Olympics.

"This event isn't a super-important one for us," says Jones. "We are testing out a few things and trying to improve our speed. It's been a long season so we're not peaking at this event. We're just hoping to continue our learning and get ourselves set up so that we can have some really good regattas in Japan later in the year."

Results and standings after day 2 of the Hempel World Cup Series Final in Marseille: