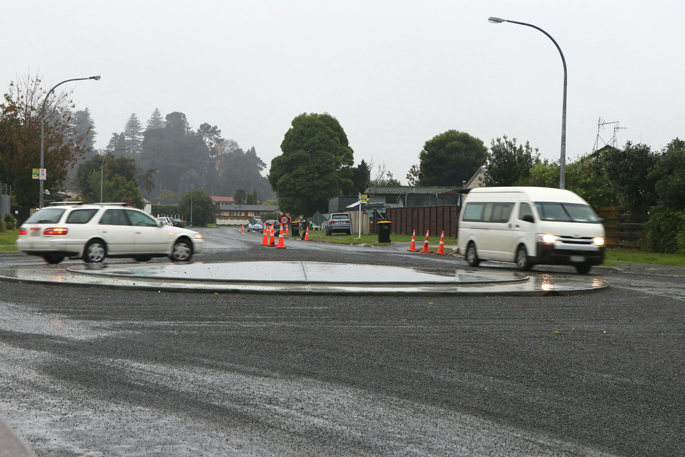 The newly constructed roundabout is on Windermere Drive at the intersection with Lagoon Place. Image: SunLive/Daniel Hines.

A new roundabout being built in Windermere has left residents asking two questions.

Why are they building the roundabout, and why has it taken so long to build?

A resident who lives in the area says the construction for the roundabout started in October last year. It was stopped shortly afterwards with construction then starting up again in February.

The resident says it was meant to be completed by the end of March but it was ‘still a hole in the ground.’

In response to being asked why the roundabout has taken so long to be built, Tauranga City Council acting manager for transportation Phil Consedine says it’s due to the proposed roundabout requiring room for construction, some utility services required relocating to accommodate the extended carriageway width.

“This posed initial delays at the start of the works and have now been resolved. Council is currently working with the contractor to resolve some unforeseen circumstances with the pavement structure.

“Once this has been assesses, works will recommence.”

Phil says they cannot confirm a completion date at this stage.

“We are currently waiting for pavement test results before final surfacing can be carried out.”

He says there are two aspects to why the roundabout is being constructed.

“One – It is a speed-calming feature for all traffic on Windermere Drive. It marks the need to lower speed specifically for vehicles coming from the northern end of Windermere Drive through the area of the Windermere Campus, where there are the bus stops and more pedestrians crossing the road.

“We have had speed raised as an issue in this area previously.

“Two – with the changes to the PT Blueprint in December 2018 there is a significant increase in the number of buses using Windermere Drive, and interchanging at the Windermere Campus.

“They currently have to travel to the end of Windermere Drive to turn around, and at off peak times some buses were observed to three-point turn at Lagoon Place.

YOU DO NOT KNOW HOW SPOT ON THE MARK YOU ARE!!!! All these "Council units" - call them what you like - get a "budget"each year !! If they don’t spend it, it gets CUT the next year and thus its a RUSH to commit the money to "something" so as not to get the budget for the next year CUT.

What an idiotic place to build this huge round-a-bout! This belongs on a wide main road - not a quiet little street! The cost must be phenomenal - not to mention the cost over-run considering the time it has taken! Sheer lunacy on a large scale!

...a couple of speed humps in Windermere Drive between Lagoon and College Place would help to ’’calm’’ those who use it as a speedway. It is vital considering that the street is a big sweeping blind curve and looks more like a used car yard!

1. because they have money left in this years budget and must spend it to protect their empire for next year, regardless of need. 2. because everything Council do follows the PPP principle

everytime they get involved in a roundabout its a disaster just look and the new one on Cambridge rd, waihi rd intersection I haven’t found anyone that thought there was anything wrong with what was there and all it has done is caused traffic to backup in all directions

How much is this costing?

Could you also get an explanation from the council why they are putting in a roundabout on the corner of Clarke/Cook Streets and 21st Ave?? Been under construction for several weeks now. Former intersection worked well!!

In answer to why the roundabout Tauranga City Council staff responds ".. and at off peak times some buses were observed to three-point turn at Lagoon Place." OKAY, so what’s the problem. There is problem other than TCC staff treating ratepayers like a bottomless pit to extract money from. There is NO issue with a bus driver applying his/her skills and reversing to facilitate a u-turn. It is safe, it is legal, it is NO problem. It is a frequent requirement of the job! Go out and buy a relocatable, police approved ’speed camera’.

Just one question that needs to be asked - How much OVER BUDGET is this job??? (It’s already WAY OVER TIME !!!)