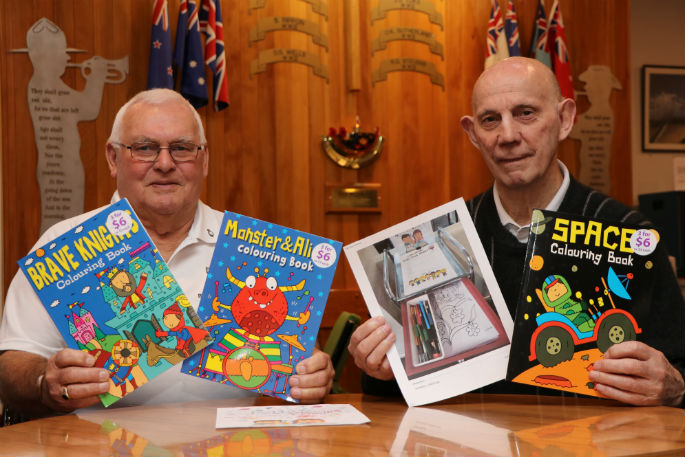 The Mount Maunganui RSA is throwing its doors open to children.

Vice president Arthur King and executive committee member Norm Harvey have created a Kids’ Club for children up to the age of 13.

The child must have a parent or grandparent that is a member of the Mount RSA.

A corner of the lounge has been set aside for the youngsters with a trolley full of activities. They can do colouring in, read books or play board games.

Norm says the idea behind the Kids’ Club was to get younger members of the community involved and they get a lot of the same perks.

Adult members take part in a regular membership draw while the kids will have their own draw in a treasure chest, says Arthur.

“It will probably be on a Saturday afternoon where we will do the draw, and if your number comes out, you go to the treasure chest, and you take one of the prizes that’s been wrapped up, then we lock the treasure chest.

“You’ve got to try and encourage the kids to sit quietly and behave themselves, but also have a bit of fun.

“The idea is to come to the RSA with their parents or grandparents in a safe environment and be looked after and monitored.”

Norm says the Whangamata RSA implemented the Kids’ Club about 12 months ago, and it has really kicked off.

“The kids who are members will get a voucher on their birthday, and it’s got to the point where they say we want to go to the RSA for dinner, so they can drag their mum and dad along, which we need.”

Arthur says it is a great way for younger members of the community to get involved in the RSA.

“Any of the kids who are tall enough or sensible enough, I can coach them on the pool table.

“For the young kids we can put a bowls mat out and have a game of bowls, we can play darts.

“It’s great for the kids to be sport orientated, and participation for the kids is very important as they get bored pretty quickly.”

“It’s like house rules, they have to adhere to the RSA rules and regulations when they are in the club, under parental control.

“They also have to adhere to the dress code, not running around in their singlets in the summer time, because we don’t let the big boys do it.”

Norm says the kids will be issued a membership card with their number on it, and a $5 membership fee applies to be part of the Kids’ Club.

Application forms for the Kids’ Club can be picked up behind the bar at the Mount Maunganui RSA.