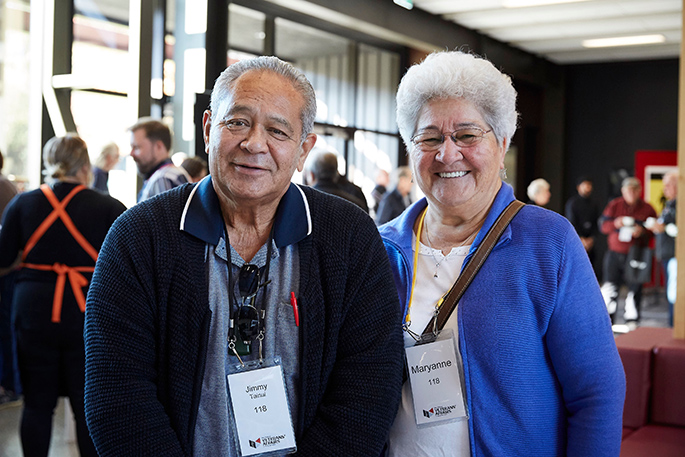 Vietnam veteran Jimmy Tainui and his wife Maryanne got plenty out of the recent health and wellbeing expo in Auckland.Photo: Supplied

Vietnam veteran Jimmy Tainui got valuable information about his health care and a priceless opportunity to catch up with his old war mates at a recent expo in Auckland.

More than 300 Vietnam veterans and their family members attended the health and wellbeing expo organised by Veterans’ Affairs New Zealand in Manukau.

Veterans’ Affairs, working in partnership with Ranfurly Veterans Trust and Auckland University of Technology, brought together 16 veteran support agencies, providers and support organisations. Vietnam veterans in Auckland and Waikato were invited to the expo, which featured support and services in a “one-stop shop”.

Jimmy, a lead scout with Victor 4 Company, was among the first group of New Zealand soldiers sent to Vietnam in 1965 and did a second tour a few years later.

“The first time we only had six months over there, but the second time was for 12 months,” says Jimmy.

For him and his wife Maryanne, who live in Hamilton, the expo was a great opportunity to find out what he was entitled to.

“It’s just a great way to find out what’s available,” says Maryanne. “At the moment we are trying to get him a mobility scooter, so we are hoping to get some assistance with that.

“We just want to be able to make him feel a bit better and to get around.”

And of course the expo also provided a chance for Jimmy to catch up former brothers-in-arms, some of whom he hadn’t seen in about 50 years.

“That is always a priority when you come to these sorts of things,” says Jimmy. “It is just so good to see everyone again – they are just like family.”

Maryanne’s three sisters also married New Zealand Army soldiers, two of whom also served in Vietnam, and they were at the expo.

“For them too it was great just to come along and see what was available, even though one’s husband did not serve in Vietnam,” says Maryanne.

“We know the value in sitting down with our veterans and talking with them about what they need,” says Bernadine. “It helps us to make sure that they are getting the support they need for independent daily living.”

While the expo was a resounding success for those who attended, it is believed a large number of Vietnam veterans, about 600-700, are not accessing the services available to them through Veterans Affairs.

Vietnam veterans who are not currently accessing veteran support are encouraged to contact Veterans’ Affairs through the website www.veteransaffairs.mil.nz or 0800 483 8372.