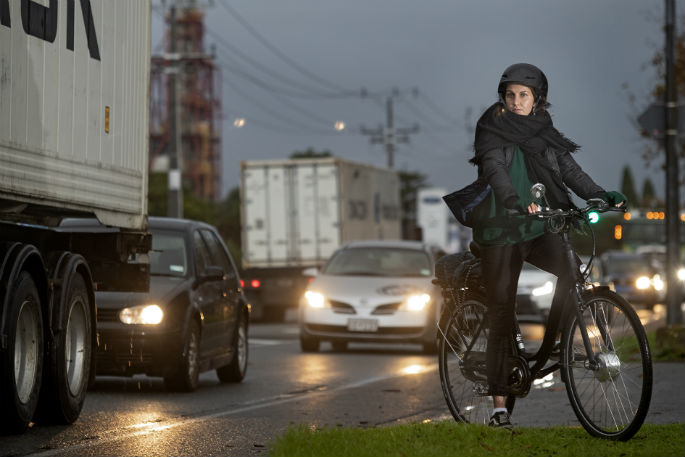 Mount Maunganui resident Marion Vialle cycles down Totara St on her daily commute (note, she has a flashing light on the back of her bike).

Hundreds of cyclists are putting their lives on the line to get from Mount Maunganui to Tauranga each week.

These cyclists will now have to wait longer for a safe access route after the Tauranga City Council postponed a key project to consider how to manage wider transport plans on Totara St.

Cyclist Nick Roozenburg describes Totara St as an ‘absolute deathtrap for the inexperienced.’

“That road is just too dangerous for people to try cycling. If you are one of those people who would like to give commuter cycling a go, Totara St would just put you off forever.”

She says UFTI will develop a plan based around the way Tauranga will grow. It will cover short-term urgent fixes as well as multi-decade planning.

“Growth will continue to add additional pressure on this corridor with the Port of Tauranga expanding its capacity and maximising productivity.”

“Bike Tauranga and Greater Tauranga need to be around the table with Council, Port of Tauranga and Kiwi Rail understanding what their needs are, but they also need to understand what the needs of the community are,” he says.

Totara St is identified as a primary cycling route connecting Mt Maunganui and the CBD. The route is used by an average of 1427 commuting and recreational cyclists per week.

About 64 per cent of cyclists accessing Tauranga Harbour Bridge to and from Tauranga City Centre use Totara Street.

Bike Tauranga affiliate Shane Plummer is concerned about the size of the existing cycleway on Totara St.

“There’s no way for bicycle commuters to get to Mt Maunganui without having to use a dodgy bike lane that’s seriously dangerous. Vehicles are passing cyclists on very limited space,”

“The cycleway desperately needs to be improved for cycling because it's a key route for cycling between Tauranga and Mount Maunganui.”

“On the bridge, it is quite safe because there is separation, but on Totara St, I do not feel safe at all.”

Sustainable Business Network BOP regional manager Glen Crowther says they support the council’s approach and will push for a safe cycleway option to be implemented as soon as possible.

People biking are good for drivers!

Drivers should be supporting cycle lanes! People who bike for transport don’t contribute to congestion, and they leave more car parks available for you! They also don’t pollute and cost the taxpayer less in healthcare because they are healthier (if they have a SAFE place to bike). And on the topic of who pays...its drivers who should be paying for their free car parking. Its total nuts that we all subsidise an activity that is so bad for our health and environment. It just incentivises people to drive more than they should and to the proliferation of an ugly and depressing concrete jungle.

IN BLACK clothing and "lights" that cannot be seen at more that 30 meters - THEY HAVE A DEATH WISH - just like the lady in the photo at the top of this item !!!

It’s all well and good these cyclists trying to dictate what they want, but how about they start paying towards their cycle lanes and paths. Introduce an annual license fee of something like $250. And yes, use a better photo next time because the cyclist in this article is not demonstrating safe riding. No wonder she thinks that stretch of road is dangerous......none of the driver’s can see her!!

Don’t think so. A tiny minority of people can not dictate things, no matter what.

We all know cycling on public roads in NZ is very dangerous, cycle lanes are just an after thought and not designed properly for cyclist, like they do in the Netherlands where cycle paths are completely separated from road users. Wearing high visibility vests is recommended for cyclists, so they can be seen. It would help if in future you publish images of cyclist only with high visibility vest to educate cyclists. These vests area available from only $7 and a great way to be seen.