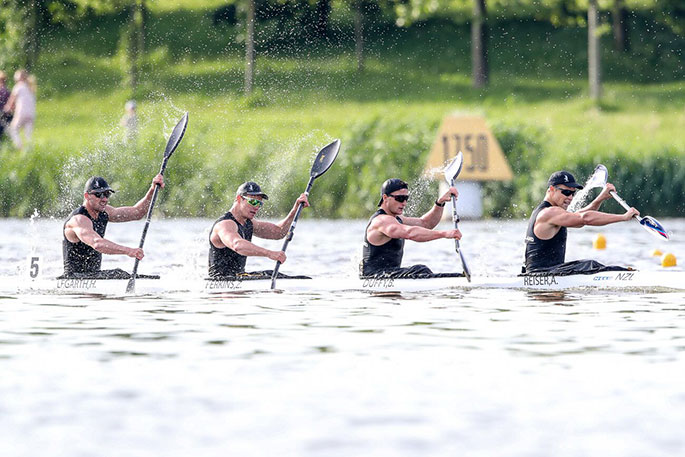 Leading the Kiwi challenge will be the K2 1000m combination Max Brown (Whanganui) and Kurtis Imrie (Mana), who last weekend in Poznan made a major breakthrough on the global stage by placing 8th in the A Final.

In what was a major boost for men’s elite kayaking, the pair will once again seek a strong showing in their speciality event in what will be only their second senior international regatta together.

Joining the men’s team in Duisburg will be Quaid Thompson (Poverty Bay), son of former double Olympic champion, Alan, who is entered in the men’s K1 1000m and K1 5000m event. Thompson last year impressed at the World U23 Championships, finishing fourth in the K1 1000m and he will be hoping to build on that performance in Duisburg.

Last week the foursome missed out on a spot in the K4 500m B Final by one place and they are once again entered in the event. All four paddlers will also feature in the K2 500m with McLeely and Watson teaming up in one boat with the all Poverty Bay duo of Hoskin and Ford in the other.

Canoe Racing NZ CEO Tom Ashley said: “We are proud of our team’s performance at the first World Cup in Poland. The competition delivered what we had hoped – our senior athletes performed with distinction and our younger paddlers made the most of the development opportunity.

“Several athletes showed that they have made outstanding improvements, which is exciting and bodes well for the future. In addition, our coaches and support team did a fantastic job – they are a key part of our athletes’ performances and we lucky to have such great people representing CRNZ to the athletes.

“Duisburg will be another great opportunity for our athletes to perform, and to prepare for their pinnacle events later in the season.”

The action will start on Friday at 7pm (NZ time) and can be followed on www.canoeicf.com

Below is a list of when the Kiwis will be in action on day one of the event. All times NZ