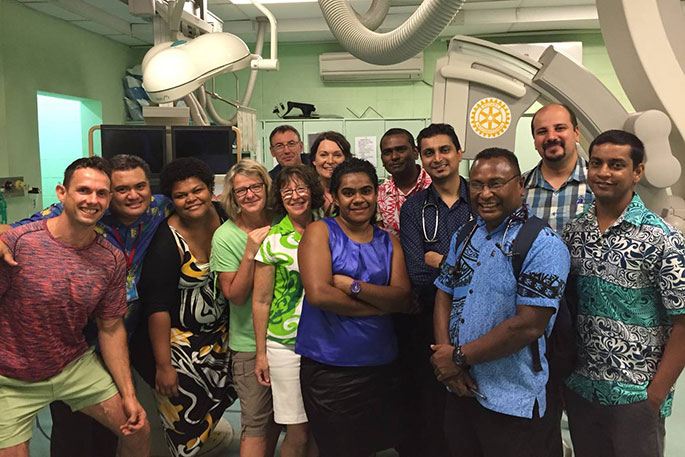 The NZ and Fiji Pacing team in the cardiac catheter lab in Colonial War Memorial Hospital.

‘Challenging but rewarding’ is how a senior cardiologist describes a recent volunteer trip to Fiji.

For the past 15 years a group of clinicians, including several from the BOPDHB, has been volunteering their time to provide lifesaving medical treatment in the Pacific Islands as part of the Pacific Island Pacing Service.

Cardiologist Jonathan Tisch is a member of the most recent team in early April.

“Professionally and personally I get a lot out of it and I know the whole team does,” says Jonathan.

“It’s very much a team effort. The operating conditions are challenging and the patients are very sick so you learn a lot. It exposes you to different situations and medical conditions.

“By the same token it’s personally very rewarding, as you’re helping people who otherwise would not be helped. These people have no other options, there is no other pacing service anywhere near them and they’re always incredibly grateful.”

The team provides critical services such as inserting pacemakers and ICD (Implantable Cardioverter Defibrillator) which aren’t provided by the local health service.

Twice a year the trip is made to Fiji for a week or ten-day visit to see as many patients as possible. The cost of the trip is covered either by Friends of Fiji or donations from individuals and Rotary.

This team works alongside a local Fijian team of senior doctors, nurses and a radiographer. BOPDHB Team Leader and Senior Pacemaker Technologist Sheryl Tait also volunteered her time and expertise on this trip.

“We are the pacemaker service for the Pacific essentially,” says Jonathan. “There’s no local service. That’s why we’ve increased it to twice a year, because the more pacemakers you put in the more follow-up you’ve got. This trip we saw 87 patients and operated on 14.”

The focus is on upskilling the local medical team.

“We make a goal of trying to train the local cardiologists and nurses,” he says. “Every time we go there the local team is getting better and better. Our aim is to make ourselves redundant, for them to be self-sufficient.”

The New Zealand team arrived in Nadi on a Sunday afternoon, travelled across to Suva, operated for five days, and then flew out on the following Saturday.

“We saw some fantastic cases,” says Jonathan. “One guy was brought in who was getting CPR at the time. If he’d come in the day before or the week after we arrived he would’ve died. So there are lives saved, it’s not only about lifestyle improvement. It’s why you get into medicine, it’s very gratifying.”

Jonathan thanked all those who were involved.

“I’m very grateful to my colleagues for donating their time, the various charities that support us with airfares and other costs, and the device companies which donate the gear.

"Pacemaker manufacturers Medtronic have been particularly good in this regard for a long time. And we’re grateful for the support of the DHB in allowing us the time off.”

PIPS is driven by BOPDHB Consultant Cardiologist Dr Dean Boddington who has operated in Fiji and other islands multiple times.

A number of other BOPDHB staff have helped out in various capacities on previous trips.

The next trip to Fiji is scheduled for September, when the pacemaker team will accompany another which performs open heart operations.