Some places to drop by 10 degrees by Saturday 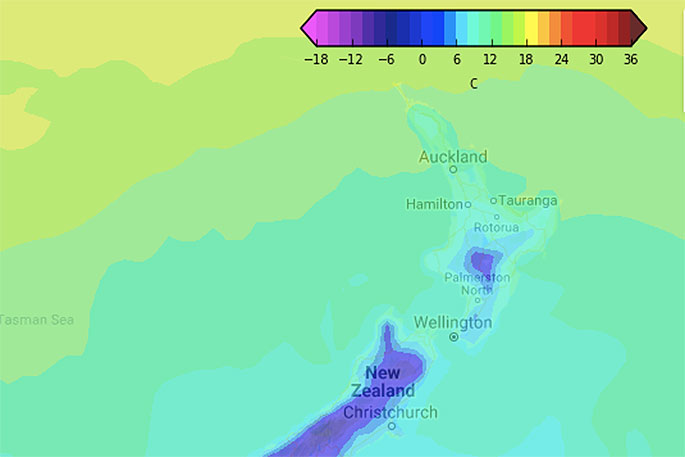 The forecast temperatures on Saturday.

A winter blast is coming this weekend and it will hack daytime temperatures back by as much as 10 degrees compared to this week.

Even northern NZ is affected by the southerly surge, the first one of its kind so far this year. On Saturday Auckland's current forecast high is 13 degrees while Hamilton has 12, says WeatherWatch.co.nz

“Highs for most of this week are hovering around the 20 degree mark and in fact yesterday the regions were in the low 20s. Hail is possible in Saturday with the windy, cold, showery sou'wester.”

In the South Island, Christchurch also has highs closer to 20 this week, with 19 forecast tomorrow and Wednesday. The high on Saturday will be only 9 degrees.

“It gets colder the further south you go,” says the weather organisation.

“Queenstown's high on both Saturday and next Monday is around 5 degrees, today's high is 14. Snow showers are possible in Queenstown for a time.”

Dunedin is shifting down gears with daytime highs dropping over 11 degrees from today, going from a high of 16 today to a high of 7 on Saturday with snow down to 400m and hail to sea level.

“The eastern North Island like Hawke's Bay, arguably one of the more sheltered, sunnier and warmer regions to be in this week will go from highs in the early 20s this week to a windy southerly on Saturday and weekend highs of only around 12 as the southerly surges in.

“Finally the Bay of Islands in the "Winterless North" goes from a high of 22 on Wednesday to a high of 14 on Saturday.

“Some areas get two shots of cold - this Friday/Saturday and again Monday/Tuesday.

“While high pressure from Aussie wants to follow on from this southerly blast next week, there is increasing confidence that yet another deep Southern Ocean low will come in - but it's not yet locked in. Talk about a weather pattern shift! Enjoy the warmer than average few days and nights ahead, as it's about to change.”