Record number of kiwi to be released this season 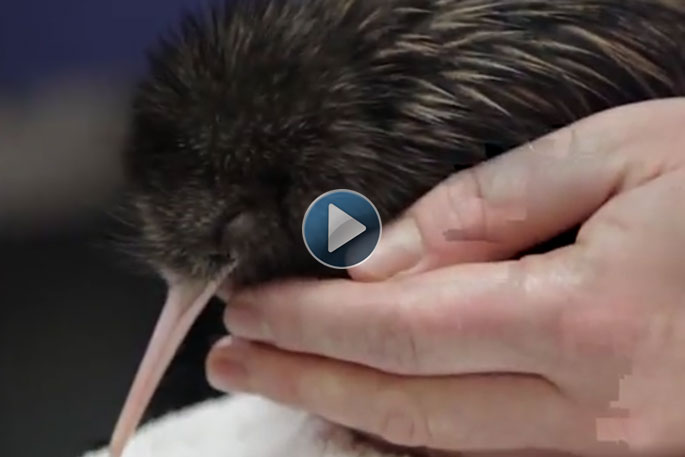 Watch a video of the hatching season highlights below.

New Zealand’s largest kiwi hatchery is celebrating a record 145 chicks being released back into forests as the hatching season wraps up.

The last chick of the 2018/19 season hatched on 13 April at the National Kiwi Hatchery Aotearoa, which is hosted at Rainbow Springs Nature Park in Rotorua.

“We’ve had more chicks at the hatchery this season than ever before. To have 145 kiwi chicks heading out into the forests around the North Island is fantastic for our conservation journey," says Kiwi Husbandry Manager Emma Bean.

This season’s number includes kiwi that were taken to the hatchery as eggs, as well as chicks that had hatched in the wild. The hatchery’s hatch success rate this season was a higher than average rate of 95.8 per cent.

This season the hatchery also celebrated the launch of its new name and look - previously it was known as Kiwi Encounter.

“In October 2018, which is Save Kiwi Month, we hatched our 1800th chick. We then reached another milestone – 1900 kiwi chicks – and we’re ending this hatching season with 1923 kiwi chicks,” says Emma.

October 2018 was also when the Duke and Duchess of Sussex visited the hatchery to meet and name two kiwi chicks, Koha and Tihei, which have since been released to Motutapu Island in Hauraki Gulf and Purangi in East Taranaki.

Also this season, the hatchery received a battery and solar power package from Mercury, to provide reliable back-up power for its incubators.

“We can have more than 40 eggs at the hatchery at one time, so having battery power as a back-up is a fantastic addition to the work that we are doing to save kiwi. If the incubators turn off, the eggs could cool down and die."

The record-breaking year was possible in part to a new brooder room supplied by Kiwis for kiwi, enabling the hatchery to care for more kiwi chicks.

‘’We are ramping up an Operation Nest Egg programme on the North Island, with kiwi eggs and chicks collected from the wild released to kōhanga kiwi sites to create permanent breeding populations that in the near future will supply offspring for release to predator control areas," says Kiwis for kiwi Executive Director, Michelle Impey.

“This is part of a national strategy to reverse the decline of kiwi and start growing the kiwi population. The National Kiwi Hatchery, with its skilled staff and now additional capacity, will be a key partner in helping realise this goal.”

“The National Kiwi Hatchery keeps setting the bar higher each year, both with hatch success rate and the number of kiwi being released back in to the wild," says Department of Conservation Kiwi Recovery Group Leader, Jess Scrimgeour.

"This is a testament to the skill and dedication of the kiwi team.”

We need more native forests, and more kiwis, less P and fewer kiwis in prison.. How hard is that ?? Glenn Holmes