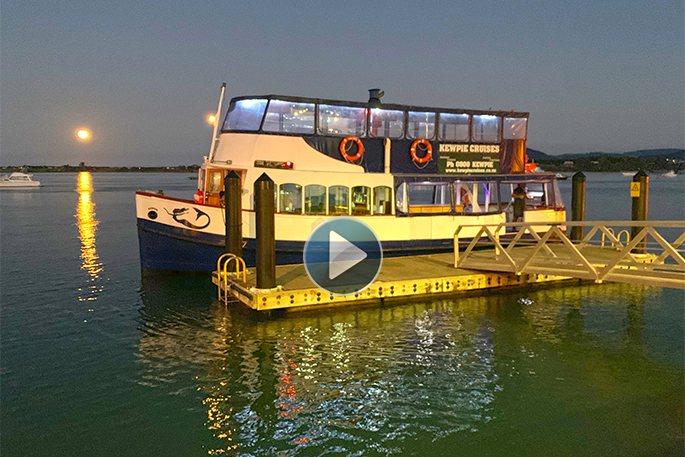 The Kewpie at the Strand jetty with moon light across the water. Video & Photos: Rosalie Liddle Crawford

One of the highlights of the Easter Jazz Festival was the Jazz Sunset Cruise on board the Kewpie.

For three evenings over Easter, lovers of Dixie jazz were able to step back into days gone by and enjoy a scenic sunset cruise across the Tauranga Harbour.

I joined the Kewpie on the Friday evening, stepping on board the historic boat while the sun was still above the horizon, the harbour perfectly calm and blue. 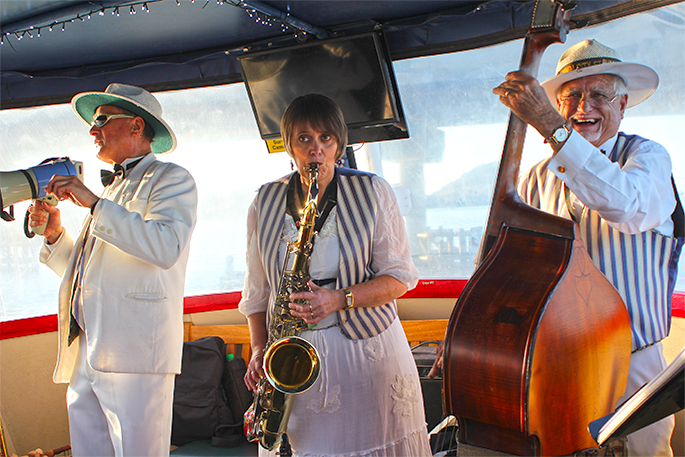 Skipper Brandon Stone has used kauri to beautifully restore the 52-foot solid kauri classic cruise boat. As you come on board, you can feel the wood, and for a moment connect with its past.

“What I really like is that it’s irreplaceable in terms of its age and character, and is one of the oldest working boats in New Zealand, yet fully renovated,” says Brandon.

“Since it was launched in 1953, it’s probably travelled the equivalent of around the globe three or four times in terms of sea miles, and had more people travel on it than any other boat in service in New Zealand.” 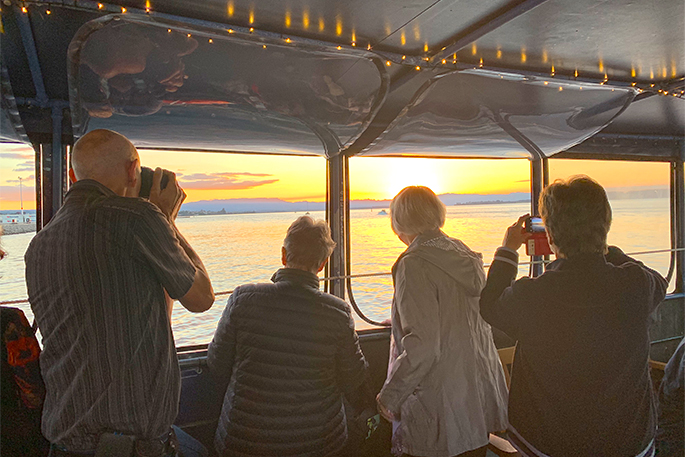 The crew of the Kewpie welcomed aboard about 50 passengers on each of the Easter cruises for the unique, unforgettable sunset experience. 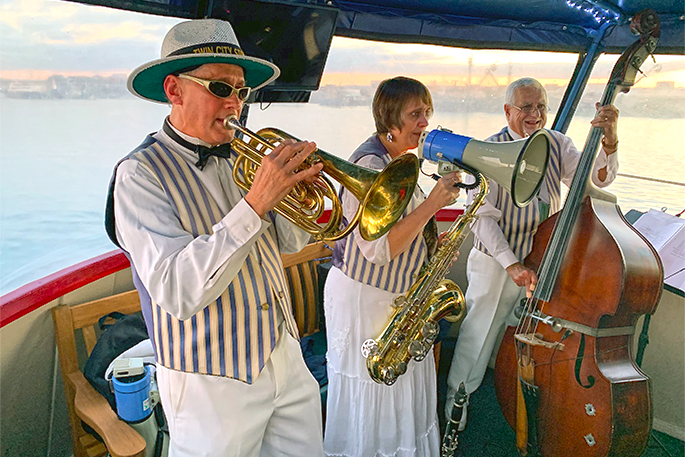 With Ross Culver on double bass, Kelvin Roy on bass, trumpet, horns and vocals, and Wendy Caldwell on clarinet, tenor sax, soprano sax and vocals, they are a Tauranga Jazz Festival favourite. Originally forming in the mid-1990s, they take their name from the twin cities of Hawke’s Bay – Napier and Hastings.

The Twin City Stompers, who have performed at the 50th, 51st and 52nd Tauranga Jazz Festivals, also played at Tauranga Airport, and at the Little Big Markets on Easter Sunday on the Tauranga waterfront.

“Their music was perfect for the Kewpie,” says Brandon, “with live Dixie music playing on board for an early evening sunset. 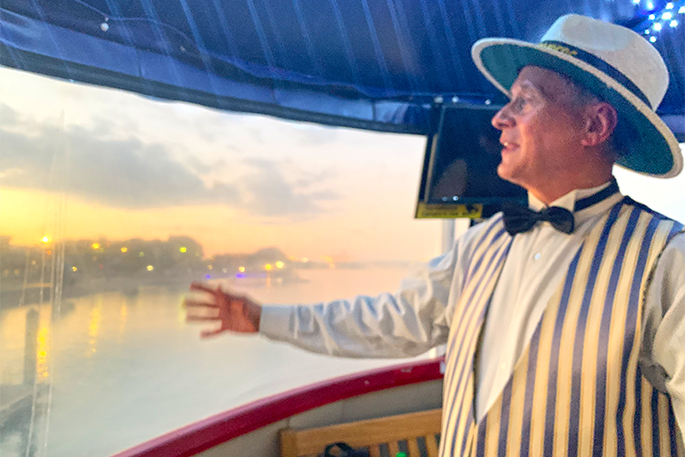 We boarded the Kewpie at The Strand, with Tauranga's National Jazz Festival manager, Mandy Ryan welcoming everyone at the jetty. Soon with music playing, we left and headed down the harbour, going under the harbour bridge, past the marina, past the shipping channels and found ourselves taking in the sights of the port.

We glided along to Pilot Bay, past the statue at the entrance and across to Matakana Island. On our return the sun was setting. And the music played. 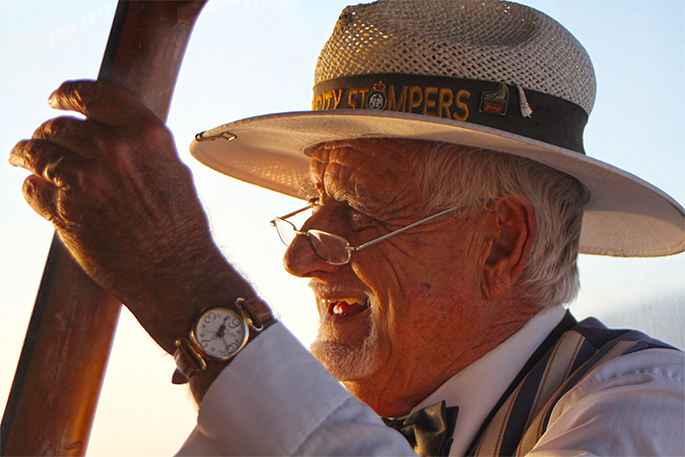 Brandon was delighted with how the sunset cruises went.

“We thought it was very successful,” says Brandon. “We were over-subscribed, it was a booked out event.

“Next year we’re looking at putting on two vessels – the Kewpie and the Bay Explorer which has a bigger capacity and room for a larger ban as well.” 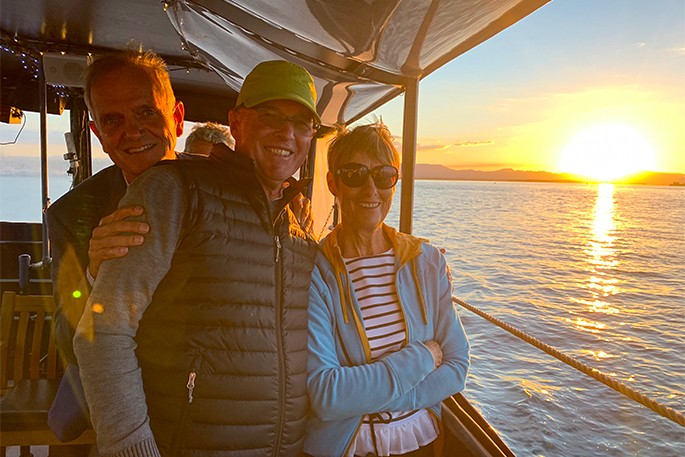 Alan Thomson, John Taylor and Linda Murray enjoying the sunset cruise on board The Kewpie

He has received tremendous feedback from the public who came aboard, despite the cruise on Easter Sunday beginning with rain.

“It just rained at the start, and then was magical after that,” says Brandon. “People were downstairs chatting and having a drink at the bar.” 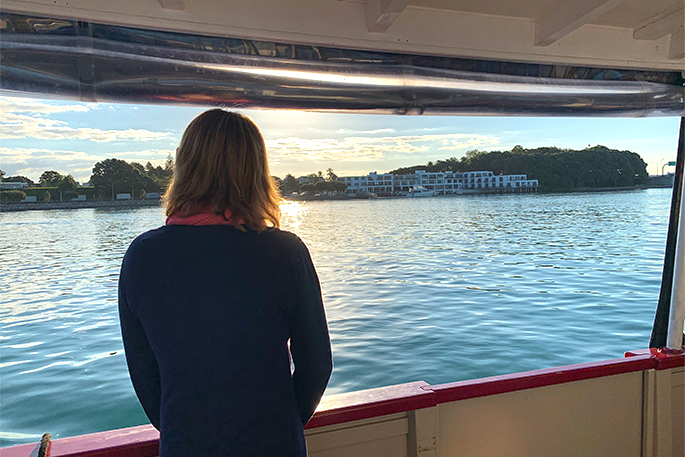 After the Jazz Festival was over I asked Mandy what she thought of some of the newly introduced features of the festival like the Vintage Parade, Jazz at the Movies and the sunset cruise.

“There were more people down town on Saturday than Sunday,” says Mandy. “They arrived for the vintage parade at 11am then stayed on in town. We think there were about 12,000 plus on Saturday.

“There were about 35 cars from the Bay of Plenty Vintage Car Club. They loved it and want to be part of it next year. And they have ideas for what they’d like to do next year. 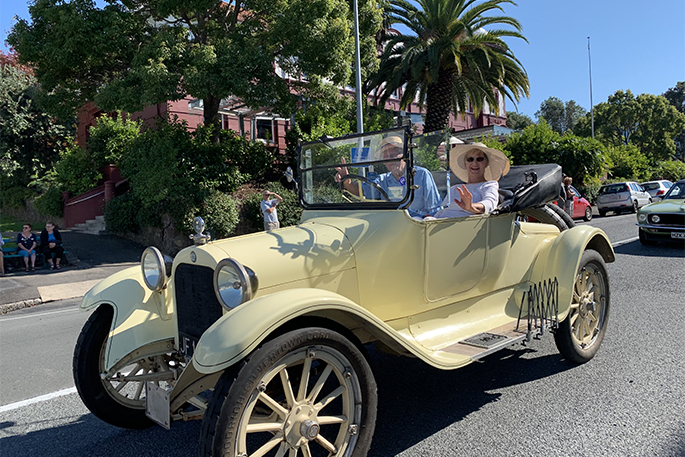 “It was also the first time for Jazz at the movies, it was a collaboration with Rialto and it seemed to sell well.

“We’ve always collaborated with the bars and cafes down town but it’s great to be collaborating with other groups too that are now joining in like Bay City Swing, Rialto, Hotel Armitage and BOP Vintage Car Club”.

As well as national musicians playing down town there were also plenty of local bands. Mandy thinks this is partly due to there being a lot of jazz musicians now living in Tauranga.

“I was very happy with the whole festival,” says Mandy. “I’ve received so many emails from people saying ‘thank you so much we had such a wonderful time’. People from Northland, from down south, thanking the Jazz Society for putting on the Jazz Festival.

“I’m going to start working on new ideas for next time but we’ll be building on what we’ve started now.”

She plans to meet with Brandon and look at what options they have with including the Bay Explorer boat alongside the Kewpie next year. The Twin Stompers were perfect for playing on board the Kewpie, as they don’t need power or a PA system. 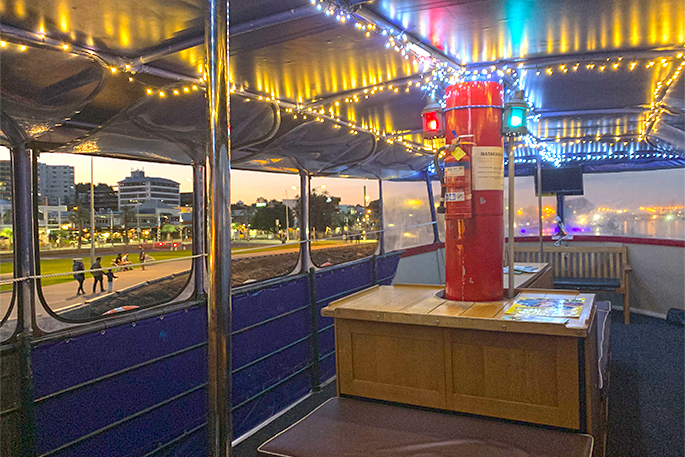 “That’s the beauty of them being a self-contained band,” says Mandy. “They have their instruments, and they use a megaphone for their vocals so you can put them into some unique places where you couldn’t put other bands.”

I asked Mandy what were some of the more special moments she experienced during the Jazz Festival.

“There were so many highlights,” says Mandy. “I saw the first Jazz Sunset Cruise off and that was a special feeling. It had been a beautiful day on the Friday and it was a beautiful evening with the sun going down and the full moon coming up. It couldn’t have been more spectacular.

“There were so many good concerts. I was lucky enough to see a bit of every concert. From a jazz perspective it was all jazz. Hollie Smith on the Sunday night was a sold out show in the Addison Theatre. That was so popular and it was good to see people coming out to hear her and see her go back to her roots in jazz.”

After Easter, the Kewpie sailed on for a few weeks taking people on one hour scenic cruises around the harbour. Both the Bay Explorer finished up their summer seasons at the end of April. They’ll be back again at the end of October. For now, over winter, there’s maintenance, restaffing, staff training and marketing.  And for me – dreaming about going on a Dixie Jazz sunset cruise once again. 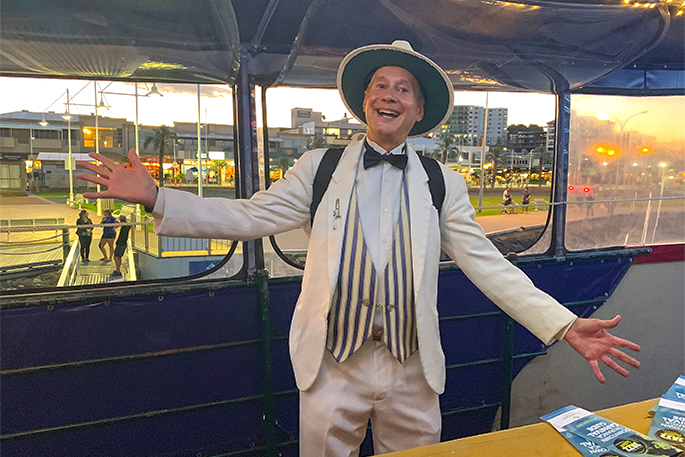 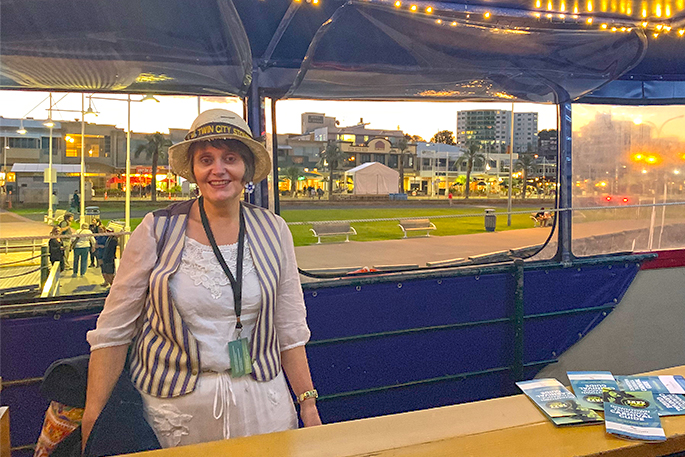 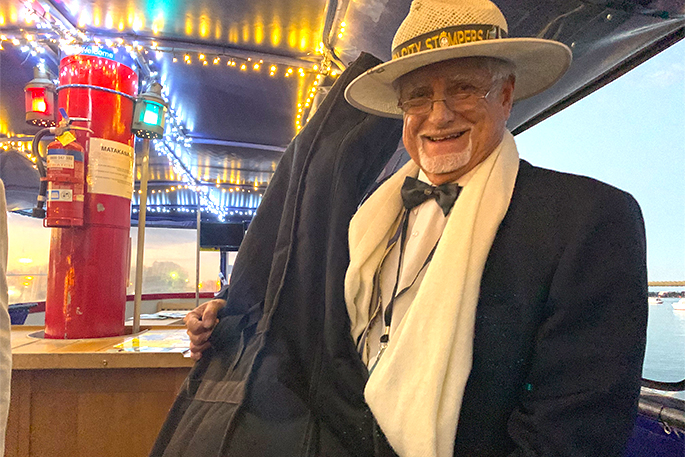 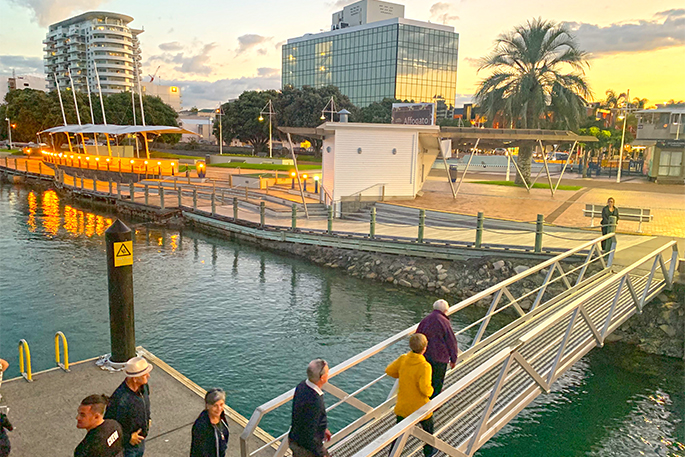 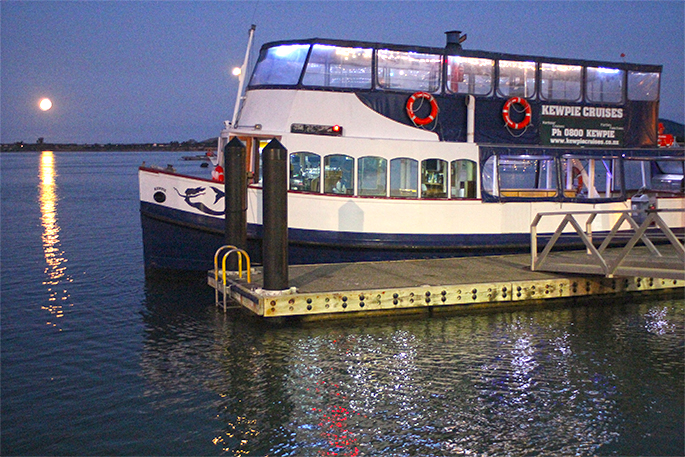