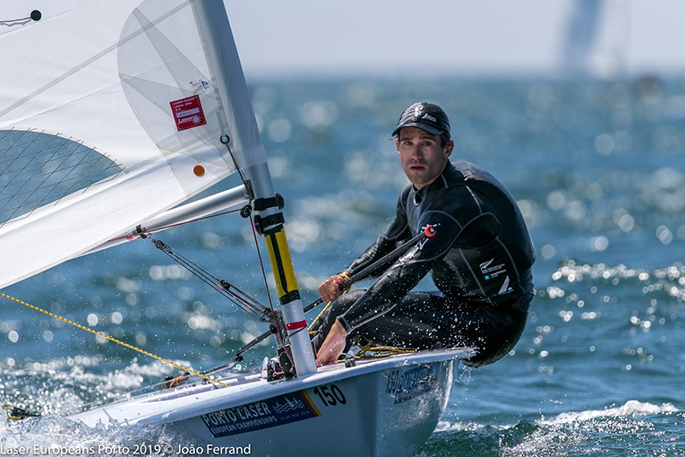 There's a good reason why Sam Meech is seen as one of the world's most consistent Laser sailors and today he added another silver medal, this time at the Laser European championships in Porto.

The 28-year-old went into the day in sixth place and not knowing if a medal was realistic, but won the first race of the day and backed it up with a seventh to sneak ahead of Great Britain's Lorenzo Chiavarini in third. Australian Matthew Wearn took out the regatta meaning it was the same one-two finish from the recent Hyeres regatta.

In fact, Meech has collected silver at all three events he's competed in this year which goes a long way to explaining why he's presently ranked No 1 in the world. Fellow Kiwi George Gautrey finished 10th in Porto and Tom Saunders was 15th to highlight the strength of the present New Zealand Laser squad.

Meech's medal rounds out a very successful period of European championships for New Zealand's Olympic class sailors. It started with Paul Snow-Hansen and Dan Willcox finishing third at the 470 European championships and followed with Andy Maloney's silver at the Finn Europeans and gold to Peter Burling and Blair Tuke at the 49er event.

"I'm stoked with that," Meech said of his silver medal. "I knew I needed a good day and wasn't 100 percent sure it was possible so I just kept trying until the end and made up for my first day of gold fleet which wasn't so good. It's another good end to the trip.

"It was a great day for me today. I had a really good first race. I just got launched off the start line, led back into the top mark and was away on the reach and the run so I was really stoked with that. It felt nice to finally be out in front.

"In the second race I didn't have such a good start but managed to pick my way through up the first beat and rounded in decent shape and picked up another couple of boats around the course. That was enough to get back into second. That was nice. Wearny won again so I will have to try to do something about that at the worlds. Hopefully he's used up all his form."

Meech will have a short training block at home before heading for the Laser world championships in Japan followed by the Olympic test event.

Gautrey will head to the world championships full of optimism after another good finish to a regatta. He was seventh and fifth in today's two races sailed in 15-18 knots and big swells to jump up a couple of places overall.

"That was more like it," he said. "I'm happy to put a day together that feels representative of what I can achieve. It was a super-tricky week but I'm happy to lock in another top 10 following on after Hyeres.

"I think things are coming together a bit more now. I still have a big list of things to work on in the next block before heading to Japan. I still feel as if I need to put in more work to take on the likes of Sam and Matt. They set a good target."

Saunders was a little disappointed with his result overall and is keen to return to the sort of form he displayed in 2017 when he was regularly fighting for medals at regattas.

"It hasn’t been the best few events for me," he said. "I just don’t seem to be clicking quite yet, which is a bit disappointing. We have a quick turnaround at home to reflect and be ready for day one of the worlds."

Denmark's Anne-Marie Rindom won the women's Laser Radial, finishing ahead of Marit Bouwmeester of the Netherlands and Belgium's Emma Plasschaert.

Results and standings after day 6 of the Laser European championships in Porto: