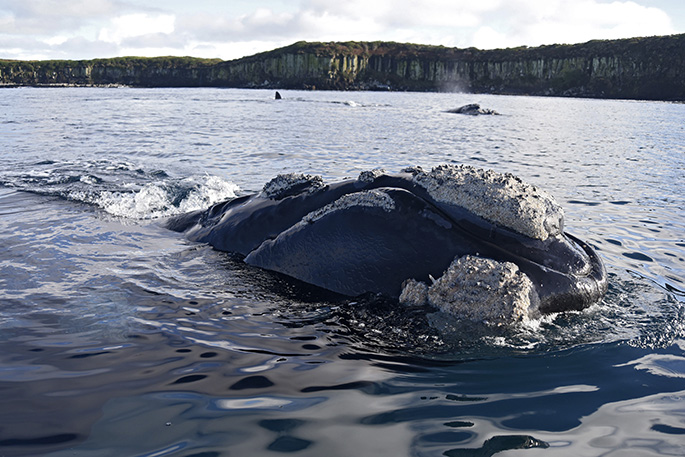 The southern right whale population is recovering from perilously low numbers and is now assessed as At Risk – Recovering, an improvement on its previous Threatened status. Photo: Will Rayment, University of Otago

The sight of a tohorā/southern right whale such as Matariki in Wellington harbour wasn’t just a fluke or a one-off – a report released today by the Department of Conservation (DOC) confirms their population status is continuing to improve.

The latest Marine Mammal Threat Classification Report (MMTCR) has revised the threat status of tohorā from “Threatened – Nationally Vulnerable” to “At Risk – Recovering” since the last report in 2013.

“The data show there’s been genuine improvement in the population of southern right whales with ongoing growth rates of 7 per cent per year,” says Dr Dave Lundquist, a marine mammal biologist with DOC who led the expert panel which produced the report.

The population size of the Southern right whales/Tohorā is estimated to be more than animals.

“This growth rate reflects the continued recovery of the population after industrial whaling was ended,” says Dr Lundquist.

Alongside tohorā, New Zealand sea lions/rāpoka and Hector’s dolphins have also changed to a better conservation status though their populations are still a long way from being out of danger.

Rāpoka has moved two categories from “Nationally Critical” to “Nationally Vulnerable”. This is largely a reflection of an apparent stabilisation in population size at the Auckland Islands since 2009 and increases in other breeding locations – Moutere Ihupuku/Campbell Island, Rakiura/Stewart Island and the mainland – during this time.

The change in conservation status for Hector’s dolphins (from “Threatened – Nationally Endangered” to “Threatened – Nationally Vulnerable”) is because abundance estimates demonstrate there are more dolphins around the South Island than previously thought, rather than any actual improvement in the species. The change is a result of improved data on population estimates, rather than actual improvement to the status of the species. The population is estimated at approximately 15,000.

“While the situation appears to have improved in some locations for Hector’s dolphins due to protection measures in place, the dolphins are still exposed to risk in much of their habitat outside those protected areas,” says Dr Lundquist.

“The data show there’s been genuine improvement in the population of southern right whales with ongoing growth rates of 7 per cent per year,” says Dr Dave Lundquist, a marine mammal biologist with DOC who led the expert panel which produced the report.”The false killer whale moved from “Not Threatened” to “At Risk – Naturally Uncommon”. Previous assessments for this species were largely based on what we know from the stranding record and this change is a result of more knowledge indicating the population is likely to be naturally small. However, the data on the species remains poor.

“Marine mammals are still susceptible to impacts from human activities, so we need to be vigilant in reducing and mitigating these effects,” says Dr Lundquist.

The MMTCR shows that 30 marine mammal species are listed as “Data Deficient”.

“We don’t know much about many of the marine mammal species that live in New Zealand waters. We’d like to see more research in this area so we can better understand the threats facing these creatures and design work to mitigate them,” says Dr Lundquist.

The NZ Threat Classification System (NZTCS) is a tool to assess the conservation status of species in NZ.

DOC administers the system on behalf of New Zealand, by convening and supporting expert panels of scientists to conduct assessments of groups of species, approximately every five years.

The assessments are a desktop exercise to review the state of knowledge about the size of populations and expected trends over the next three generations, or 10 years, whichever is longer.

The expert panels evaluate information that is available at the time; they do not specifically survey or monitor populations, nor do they commission such work.