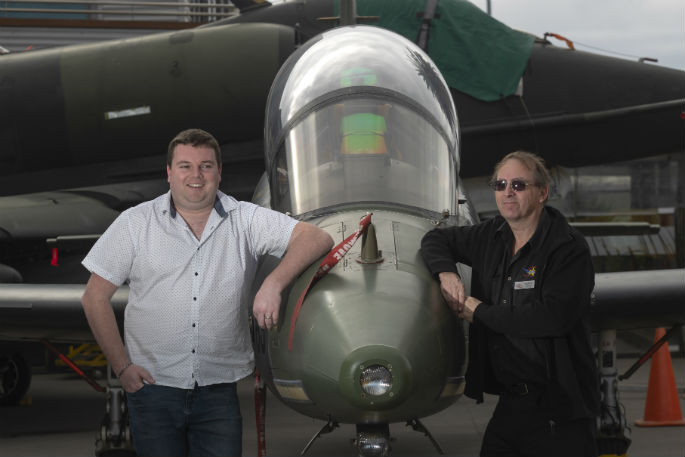 The roar is deafening and it spits flames.

And for anyone with the faintest attachment to flying and aircraft, that in itself must be worth the gold coin admission fee to the Classic Flyers 14th Anniversary open day on Sunday, May 26.

“We will be running up the engine on the Aermacchi MB-339,” says the Classsic Flyer’s Garry Bently who’s organsing the open day. “It’s really noisy. But I still have my hearing ….just.” The Macchi, as it became known, is one of the stable of aircraft on show at the open Day.

The Macchi is all noise, no bite. It did have a second line attack capability when equipped with 12.7mm gun packs, bombs and rockets. But it was decIawed with the disbandment of the Air Combat Force. “Cost the country millions and got absolutely nothing for them when they tried to flick them on.”

That was Classic Flyers good fortune. They scored one.

“It’s not an air show, there’s no fly past,” says Garry. But they are promising sound, smoke and motion. “It’s up close and personal with a whole lot of flying machines – and some very special ones.” And a great opportunity for photographers.

They will also be running the Harvard – its radial engine produces a very distinctive sound, and was one of the most widely produced, and used, training aircraft ever.  They’ll also be winding up the P-40N Kittyhawk – on one hand it’s   included on the list of the worst combat aircraft of WW2. On the other it was a known as a “pleasant aircraft” when flown by an experienced pilot, and good in aerial combat.

A Boeing-Stearman military trainer biplane will be on display, and Craig Mossman might bring his L39 Albatross – a Czech developed high performance jet trainer. If you haven’t seen it, you would have heard it shattering the skies over Tauranga.

“Bucket list passenger flights,” explains Garry. “Three thousand dollars for some high speed rolls, zooming to altitude and Tauranga to Rotorua in five minutes. Exciting stuff.” It won’t be operating at the Classic Flyers open day but it will be very visible.

And just across the road a treasure chest of aircraft will be revealed at the Historic Aviation Trust hangar.  There’s a Messerschmitt 108, a Tiger Moth, a De Havilland Dove and an A-37 Dragon Fly Jet from the Vietnam War. The 21,000 RPM turbine blades produced a high-pitched squeal which earned the aircraft the nickname of ‘Tweety Bird.”

There will also be ground entertainment for the kids – fire engine rides and something called “The Cave” – a trailer loaded with virtual reality computers.

The 14th Classic Flyers NZ open day is on Sunday, May 26 between 10am and 2pm. Entry is by a gold coin. Just being there will put you in the draw for a flight in the Boeing-Stearman biplane.