When the faithful swap faiths 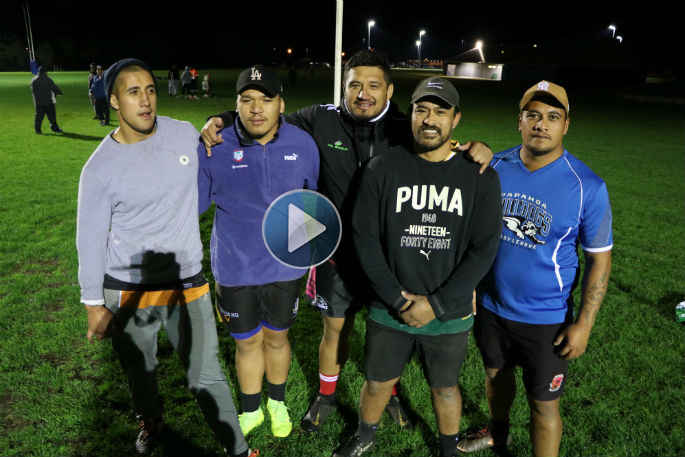 They are the code hoppers, the rugby union defectors.

And when the Papamoa Bulldogs rugby league team ran out against Turangawaewae in Ngaruawahia last weekend no fewer than seven of the players were rugby union converts – more than half the team.

The trend doesn’t signal a wholesale disenchantment with the national game which is enjoying year-on-year growth in Bay of Plenty.

“We just decided to give league a jam,” says Taite Smith, a bullock of a man who plays in the front row. “And we’re enjoying it.”

Now 35, he had been playing rugby since he was five, sometimes at representative level.

Then he got pulled into a league team for a Maori tournament in Rotorua and the man found new faith. A faster, easier and more enjoyable game he found – simpler, not as many rules.

“I’m more of a one-on-one tackling person. That physicality is good. More physical than union I think.”

And as a rugby union prop he was sick of scrums, sick of his “neck being screwed” for three days from scrummaging.

“With a league scrum you put your head in and the ball’s gone.”

You get on with the game.

And no lineouts – “No lifting those big lugs who don’t want to jump.”

He has no beef with rugby. No ill-feeling. He just saw an opportunity and seized it – swapping his red and black Arataki jumper for the big blue and white V of Papamoa Bulldogs.

He’s talking to The Weekend Sun in a draughty changing shed at Gordon Spratt Reserve. A bitterly cold evening before practice but both Taite and his ex-rugby mate Malakai Kasina have warmth and passion for their new code.

He grew up in Wellington playing for Hutt Old Boys Marist before joining Mount Maunganui Sport.

“I felt I had done everything I could with rugby, played so many games for the premiers. But every year when it came to making a decision, it was one more season of rugby, one more season.”

It was a charity game that swung him. A team of league ring-ins played Arataki rugby club at league.

“The boys wanted me to play because they reckoned league suited my style.”

He did play, it did suit him, he was won over.

“You have to be loyal to your mates and the club but I thought I am going to do something for me and try something new.”

And it’s from rugby that the Papamoa Bulldogs have garnered most of their recruits.

“Good men,” says a grateful coach James Nicholson. “Great to have around and be around.”

“At the moment we have these guys following the ball like a honey pot, instead of sticking to their channels. In league we play in zones and we stick to those zones in attack and defence.”

They are doing what is instinctive to rugby players, so it’s a re-education process.

“They’re good stock those guys, and awesome for the club,” says James.

“I still go down and catch up with the Mount Sport guys,” says Malakai. And Taite says union is always going to be the nation’s number one sport so he will still watch “a bit of rugby.”

“They like the physical side of league, a few bumps here and there. But I want them to have the opportunity, to try both.”

The Bay of Plenty Rugby Union agrees with him.

It says many teenagers participate in multiple sports during the winter season, including rugby on Saturdays and league on Sundays.

“It's not uncommon through the explosive popularity of girls’ rugby that they play netball on Saturdays, rugby on Wednesdays and Kapa Haka on top of this,” says Bay of Plenty Rugby Union community rugby manager Pat Rae.  “We encourage our kids to play a multitude of sports, especially in their formative years. It gives them a multitude of experiences.”