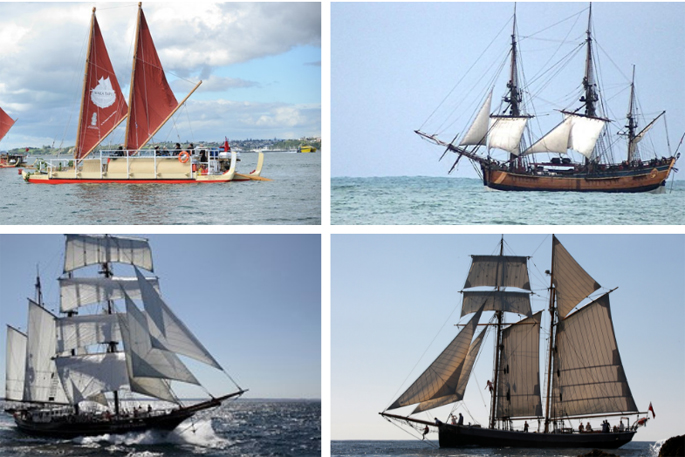 A flotilla of historic vessels will visit Mercury Bay in October as part of the Tuia Encounters 250 national commemoration.

This year New Zealand marks 250 years since the first meetings between Maori and Europeans during Captain James Cook and the Endeavour’s 1769 voyage to Aotearoa New Zealand.

Tuia Encounters 250 acknowledges this piviotal moment in our nation’s history as well as the exceptional feats of Pacific voyagers who reached and settled in Aotearoa many years earlier.

A highlight of the commemorations is the six-boat Tuia 250 Voyage Flotilla, which will start its journey in Gisborne on October 5 and will sail to Uawa/Tolaga Bay before visiting Mercury bay from October 18-21.

Wharekaho also known as Simpsons Beach in Mercury Bay is the second main site where Maori and Captain Cook met. This was also the site where Cook and his crew observed the transit of Mercury.

The fleet will land at the northern end of Wharekaho where it will be met by Ngati Hei and proceed to the southern end of the beach to the historic Ngati Hei pa site where a powhiri will take place.

Manatu Taonga Ministry for Culture and Heritage chief executive Brenadette Cavana last week announced the six core vessels that will take part in the Tuia – Encounters 250 national commemoration. They are:

A va’a moana from Tahiti.

Two heritage ships and one youth ship, which will sail together to sites around New Zealand later this years.

The waka hourua are Haunui from Tamaki Makaurau/Auckland and Ngahiraka Mai Tawhiti from Tauranga. The va’a moana is Fa’afaite i te Ao Ma’ohi and joins the flotilla from Pape’ete, Tahiti.

The heritage vessels joining the flotilla are the HMB Endeavour replica from the Australian National Maritime Museum in Sydney, the Spirit of New Zealand from Tamaki Makaurau/Auckland, and the R. Tucker Thompson from Pewhairangi/Bay of Islands.

The Royal New Zealand Navy will be supporting the voyage with naval vessels at different sites.

When the boats visit Mercury Bay there will be opportunities for the public to go aboard. Alongside the boats, a range of other events will include:

Activities by waka hourua crew to instruct the public how to use waka sails and build a star compass.

Speaker presentations about the Spirit of New Zealand youth programmes,

Display of story boards about the R. Tucker Thompson.

“This event will be so much more than simply focussing on what happened in 1769 when James Cook, Tupaia and the Endeavour crew arrived in Aotearoa,” says Bernadette.

“New Zealanders are ready for and want a balanced, respectful and honest reflection of our journey together from those encounters to now. The Tuia 250 Voyage will provide a framework for this discussion.

“Together we have an opportunity to recognise the extra ordinary voyaging traditions and cultures of Te Moana Nui a Kiwa, the exceptional feats of Pacific voyagers, their knowledge, innovation and non-instrument navigation prowess and their decision to settle in Aotearoa before European explorers arrived.

“We will also acknowledge the feats of those European explorers and the technology they developed and mastered in crossing oceans to get here from Europe.”

From Mercury Bay, the flotilla will visit sites around New Zealand with significant cultural and historical importance to both Pacific and European voyaging through December.

“The coming months will provide many opportunities to learn about our dual heritage and think about our future – through regional and national events, activities and by following the Tuia 250 Voyage.”